I finally finished my 2010 Wool Club rug!  My project for this week will be to decide on a name.  I stink at naming projects!  "Flowers" just doesn't cut it. 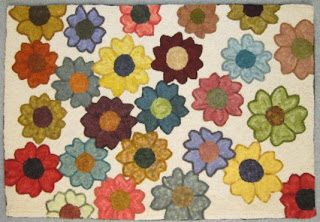 I had a fairly productive holiday weekend.  In addition to putting the finishing touches on the rug, I made a cover for my journal (I've been trying to decide what to do ever since Wool Club!) and started on my first new quilting project for the year.  Although I shouldn't have, I committed to a group project through the Primitive Folk Art Yahoo group.  We are doing a quilt inspired by this book: 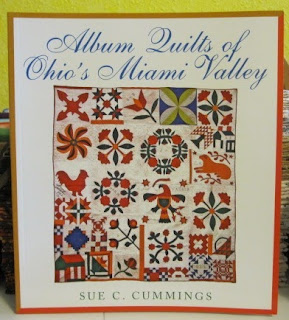 There are eleven quilters participating in the project.  We are each supposed to start the project by making an eagle this month.  We will then make a swap block for another member of the group each month.  I selected the cake basket block as my swap pattern.  Each month I will make and sign a cake basket block and send it to one of the other participants.  We can make as many other blocks as we want to complete our quilt.  This is not a pattern book - we are designing our own projects in the tradition of the Miami Valley qlbums.  I started my eagle this weekend and made fairly decent progress.  I am using the new "Piecrust" primitive muslin designed by Lisa Bongean as my background.  I love the color!  I wish I could say the same about the rest of the fabric I am using... it's all quality stuff, but the repro cottons just don't work as well as batiks when needleturning tiny eagle toes and beaks!
Posted by Dana at 6:52 PM No comments:

I know that it's pretty common to want something even more when you are told you can't have it, but how crazy is it to react that way when you are the one who said "no"?!?  That's why I don't make resolutions - I not only can't stick with them, but I become completely obsessed with doing whatever it takes to thwart my efforts!  Shortly after I told myself that I would not sign up for any new BOMs for 2011, I saw "My Renaissance" on the Common Threads Quilting website. 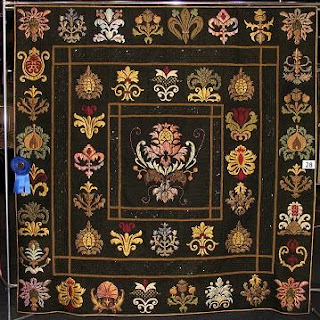 I had to sign up for this one.  Just one BOM isn't too bad, right?  Of course, when the first package came and I realized they were sending four blocks at a time it seemed a little more intimidating...  Then Homestead Hearth sent out their newsletter and I was intrigued by their "Fundamentals Weekly Block" program.  Why, I don't know - $3 for fabric for one block isn't all that economical, and I don't really like piecing, but for some reason it sounded like fun.  I signed up for the batik option.

I also noticed that they are planning to do Sue Garmin's new "Friends of Baltimore" as a BOM...fortunately for me they aren't taking sign-ups yet! 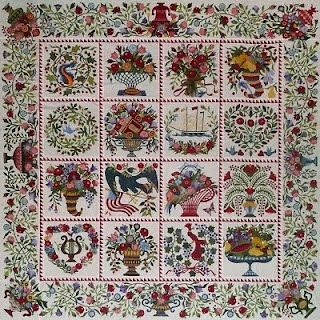 And then there's Sue Spargo.  I was able to resist when the info on the 2011 program first came out.  The program filled up, and I was fine with that.  That is, until I saw another picture of the project a couple of nights ago.

What could it hurt to just call and put my name on the waiting list?  So I called - just to put my name on the list, right? - and found out that someone had just cancelled - what luck!  How could I resist?  It must have been meant to be!  I can almost recite my credit card number from memory...
Posted by Dana at 5:40 AM 1 comment: