I completely missed posting after the FNSI even though I made significant progress over the weekend and actually had something to share! I took the pictures and was all ready to post early Monday morning and then that nasty little thing called work got in the way. I worked like a crazed lunatic from very early in the morning to early evening trying to get as much done as possible before heading out to Paducah for Quilt Week (which ended up being more like altered work hours than an actual vacation, but I'm getting used to that...).

Anyway, last weekend I caught up on my 365 blocks (with the exception of the center - that's still on the "to do" list). Since this photo was taken I have completed another week of blocks. The instructions for assembling the center dark border were published last week so now I am motivated to finish the center so I can start assembling some of these little guys! 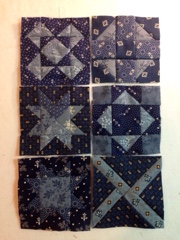 I also completed a couple more of the alternate blocks for Allietare so I could see it all together.  It's kind of a weird color combination but I think it works.  Gray now seems like an odd choice with everything assembled - but it was a mystery and you never know!  I decided to forge ahead. 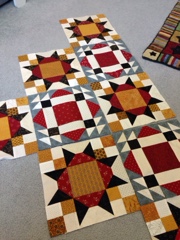 So, decision made I decided to go back to finish the steps I missed leading up to the final block assembly.  I finally finished all the Santa hats! 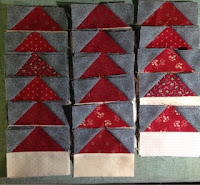 Paducah was lots of fun this year.  I continue to feel that the show is being diluted - not that there weren't some really incredible quits there, but there were a few that you just had to wonder about...and there was really nothing new and exciting for sale by the vendors either.  Part of the problem was that I am still raw from the pain of the sewing room clean-out and was not inclined to purchase anything that required me to find a place for it, but I just didn't see anything I had to have.

I went to a lecture and took two workshops from Carolyn Konig of Australia. Poor Carolyn's luggage didn't all make it to Paducah. One of her suitcases made a grand tour of the US, heading from Dulles to Hawaii and then back to Dulles and then who-knows-where. It was still missing in action when I left on Friday. She had a couple of quilts and some of her supplies in the case that stayed with her but was forced to give her lecture and teach her classes without her notes and visual aids.  She managed to do a great job in spite of the challenges, however, and she did at least have two of her fabulous quilts to share. 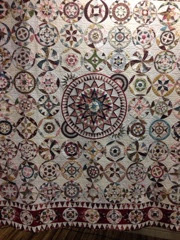 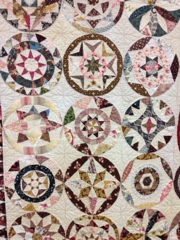 One of the workshops I took was "Oh George!", a hand-piecing class based on the above quilt. Carolyn's technique is a little different from the way I learned and I was a bit slow, but I did learn a few valuable tips for working with curves and pieces like this quilt. 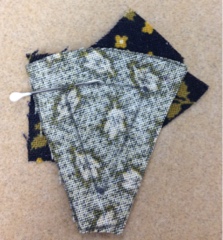 I think I managed to get about three of these seams sewn during class.  Those curves are a lot trickier to line up than straight piecing! I don't think I would live long enough to get a quilt full of these completed. I may need to cross this one (and the ones like it) off my list!

Wow - April is definitely flying by!  The Friday Night Sew In sneaked up on me!  I plan to catch up on this week's 365 Challenge blocks but then hope I can get some time to work on something else. My APQ UFO for this month is my Allietare mystery and I really would like to make some progress on it.  I need to get a few more blocks together so I can see if my gray can stay or if I will be starting that half over again. I really, really hope they can stay!

If you would like to join in the FNSI fun, hop on over to the Sugarlane Designs blog and add your name to the list!

I will be back after the weekend with a progress update - and hopefully a decision on Allietare!
Posted by Dana at 6:44 AM 1 comment:

I was so busy finally finishing the unpacking of the sewing room over the weekend that I completely missed posting my Quilty 365 update! I was so sick of trying to sew amidst the chaos - not to mention that I needed to finish going through all the boxes to get ready for our guild yard sale in a couple of weeks - so I was determined to keep going until I finished.  It took the entire weekend, but I did it!  Five full boxes plus a few over-sized items priced for the sale and everything else put away. 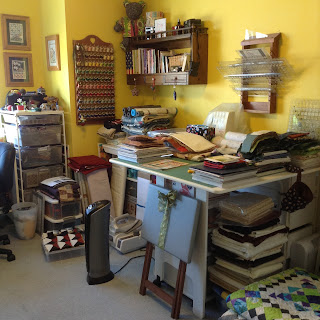 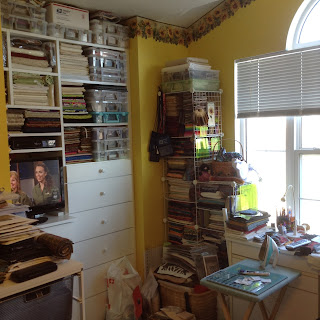 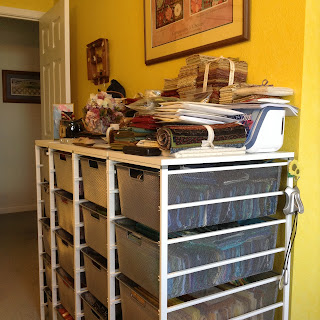 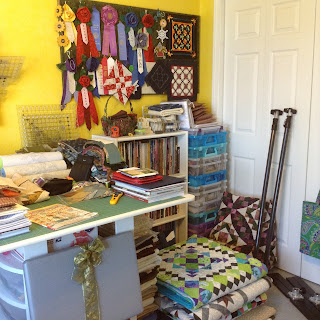 And here's the "after" (not much on the walls yet - I'm still trying to decide if I want to hang some of my Cardinals memorabilia or leave them blank): 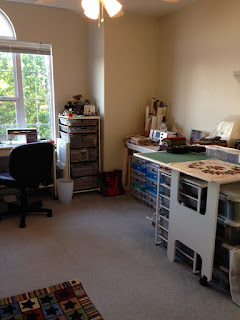 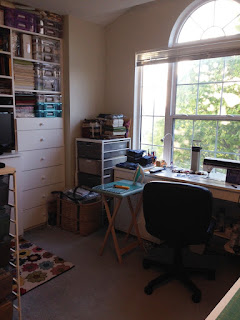 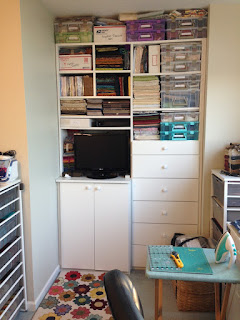 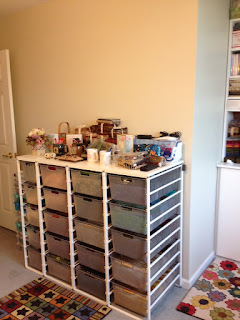 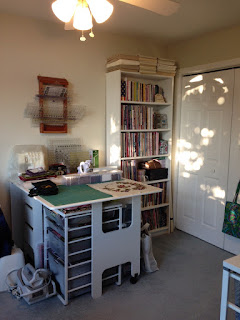 My room is still bursting at the seams but at least for the moment is a lot better than it was. It's borderline ridiculous - I have enough fabric to last me the rest of my life. I have decided that I need to exercise a lot of self-control in Paducah this year!

Back to the Quilty 365 update.... I was doing SO well - I was ahead a day or two on my orange peels for most of the month.  And then I had to travel.  Usually I at least get a little sewing done while I travel, on the flights if at no other time. Unfortunately both legs of this trip were not only short but extremely turbulent. I wasn't able to sew on either flight and was tied up in the evenings with long dinners the rest of the time. I did get to enjoy dinner at the top of the Hancock building.Our waiter informed us that we needed to go up to the ladies' restroom and see the view - they claim it's the best restroom view in the US.  Given that most restrooms don't have a view, I wasn't really sure that bar was very high....but it was quite a view!  We took photos to share with the men in the group - apparently there were no windows in the men's room. 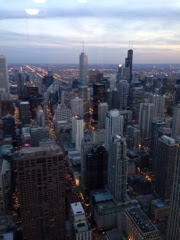 We had to go back up after dinner to capture a night shot. 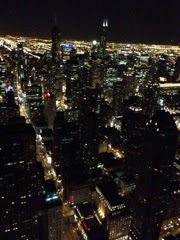 So I ended the month with 26 blocks (yes, one is missing from the photo...but including it really messed with my OCD brain). 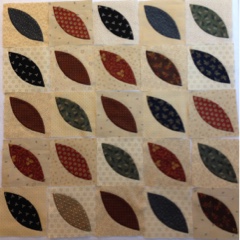 March 31 was the 91st day of the challenge, and my total stands at 83 blocks. I'm cheating a little counting the blocks I completed last year, but it gives me hope that I might actually make 365 this year. I'm on track so far for April with 5 blocks completed as of last night. I'm determined to hit the target at least once!
Posted by Dana at 6:08 AM 2 comments: