I don't have any finishes to report for the month of March, but I did make very good progress on at least one of my UFOs.  I finished 12 of my Magic of Christmas blocks, leaving 4 (2 each of the last two patterns) to go.  And I loosely came up with a setting that requires only 49 blocks, so that would mean only 3 to go (and a lot of half square triangles for a border...).

I didn't fare so well on my Mosaics project.  I've been focused more on hooking than applique in the evenings the past few weeks so I only managed to finish getting the bird stitched.  I was hoping to finish all of the center applique during the month but that just didn't happen. I am excited to report that I finished hooking the center of the ship rug, however, and just have a couple of rows of border to hook before it's on to binding that one.  I am hoping to have it ready to bind at Wool Club next Saturday.

I have managed to keep up with my Triangle Gatherings blocks, completing 3 last week for a total of 25 so far. 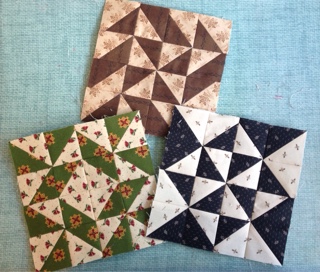 The 6" blocks are really fun to do and go really fast when you have the pieces pre-prepared. I have 3 more ready to go and then will need to starch more charm squares. I'm still not loving making the 3" blocks using the triangle paper and have not done any more. I'm getting so far behind on those that I may scrap that plan completely and just stick with the larger ones. 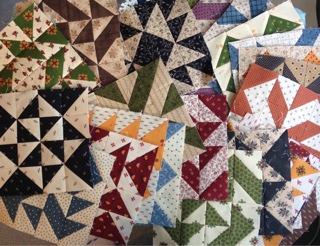 The month of March ended with a crazy busy work week that prevented me from doing much of anything.  April is off to a good start, however, with quite a bit of progress on my APQ UFO (Disappearing Nine Patch) and the opening of baseball season (my favorite time of year)! 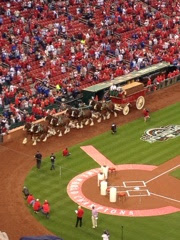 I was lucky to be able to attend this year's opening game.  I haven't been to one in quite a few years and was really amazed by the number of people downtown - clearly the game being on a weekend instead of the usual weekday afternoon was a huge boost to the downtown economy.  The Cardinals really know how to open the season - it is so incredible to see the Clydesdales circle the field and watch all of the Hall of Famers on the field.  And we pulled off a win against the Cubs - a beautiful way to kick off the year!
Posted by Dana at 6:27 AM 1 comment: