Not that I got all that much accomplished over the weekend, but what sewing I was able to do certainly was hard on my fingers!  Both middle fingers are sore - the right one because I worked without a thimble pad for too long and the head of my chenille needle penetrated my skin, and the left one because I hit it too many times with the same nasty needle.  I intended to work primarily on my baskets and did manage to get one finished: 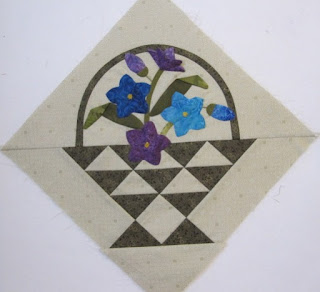 I also started prep work for three more - I have plenty of stuff to work on during Karen Kay Buckley's workshop on Wednesday.

My thread came in the mail along with last week's BOW, so I couldn't resist doing a couple more of the summer freebie blocks: 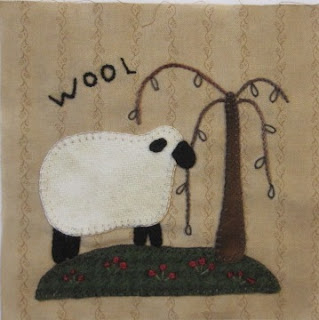 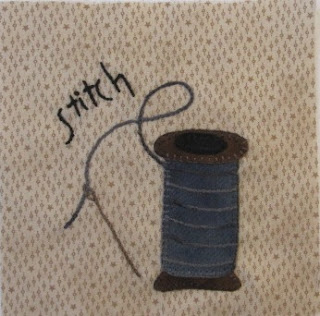 I love these blocks!  Especially the little sheep.  I'm really enjoying the embroidery, too.

I made a lot of progress on the Sauder Village rug over the past week but failed to take a picture for today's post.  I have the church, one house, and a little background left to do.  My goal is to have it hooked, steamed and ready to bind in time for Wool Club next Saturday.  I love deadlines!
Posted by Dana at 12:42 PM No comments:

Hooking with Jayne Hester and Other Things

I'm a little bit behind on posting (not unusual, I know) so I have so much to share...  I attended a fabulous workshop with Jayne Hester at Wooly Woolens in Blue Springs the weekend before last.  Jayne was a great teacher, and Janice and Jim are absolutely incredible hosts!  We had great food, fantastic conversations (especially talking gardening and cooking with Jim!), visited one of my favorite quilt shops of all time (Quilter's Station) and shared the company of a group of wonderful people.  My rug was a bit of a challenge, however.  It was far more difficult than I anticipated, and made even more challenging by Jayne's affinity for low-contrast hooking. I somehow completely forgot to take any pictures during the workshop, but I did snap one of my pattern when I finished drawing it: 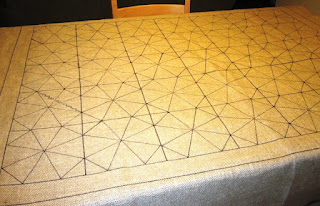 It's a quilt block called a kaleidoscope.  When done correctly, there is a secondary pattern that develops that looks like circles around each block.  We learned the hard way that this doesn't work unless there's enough contrast between the mediums and darks.  I ended up pulling out a good portion of the work I did over the three days.  I have corrected some, but still have a little work to do before it is right.

I went back to working on the Sauder Village rug when I returned home.  Now that I've figured out the grass and sky colors it's just a matter of finishing the hooking. 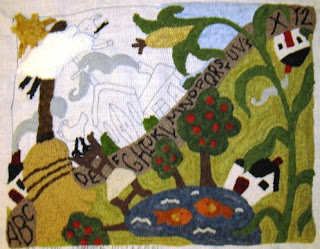 I am making some progress on my summer BOW but am falling behind at a rapid rate (again, nothing new!).  It isn't all my fault - block one was a week late (shipped with block two), so I was one block behind from the start, and then I had to order thread.  It took a week to get the thread, and by then block three had arrived.  Since I didn't have the thread for the BOW, I set to work on the summer freebie: 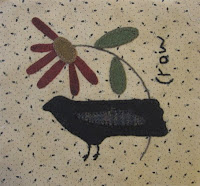 Once the thread arrived, I set to work on the BOW.  I finished block one over the weekend: 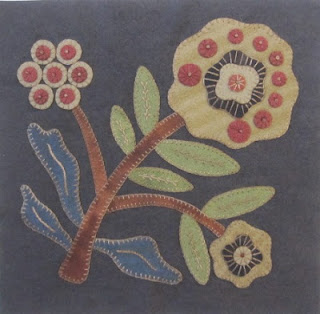 I also finally got back to the project I am supposed to be focusing on - the quilt I want to have finished for our June 2013 show.  I finished the last of the four rose blocks, so now I can move on to something different. 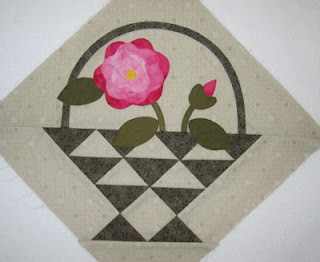 I have a long way to go on this one - 19 more blocks, I think. It's a bit daunting to think that I have only 11 months left to finish all those blocks and piece the border, not to mention get it quilted.  I haven't given up yet.  I prefer to live in my little fantasy world just a tiny bit longer.  Just 2 to 3 blocks per month - not a big deal, right? Sigh...
Posted by Dana at 3:27 PM 2 comments: