I had an absolutely fantastic time in Kansas City last weekend!  Janice & Jim Johnson are always fabulous hosts!  We had a great group of people - some of the regulars and a few new faces. 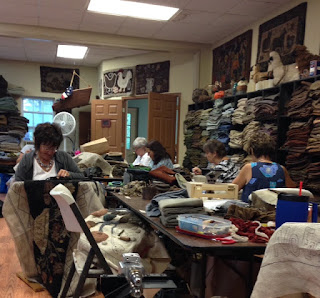 This was my second workshop with Jayne Hester and I am really thrilled with how my rug turned out. I would have never come up with the idea to run with teal in a pineapple and certainly would not have used teal for sunflowers, but I am so happy with the colors! 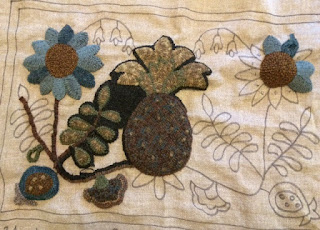 I've actually made a little more progress since I got home, mainly filling in background.  This is such a small rug relative to my usual projects - it might actually be finished reasonably soon!
Jayne's specialty is low contrast, old-looking rugs.  I think she stepped out of her box a bit for me (although my colors certainly aren't "bright" relative to a lot of things I do!). Many of my classmates had much more subtle rugs. Jeannette's was very neutral: 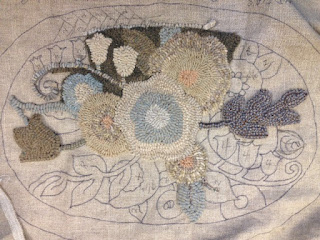 And Leah's was done in shades of gray with just a hint of lavender: 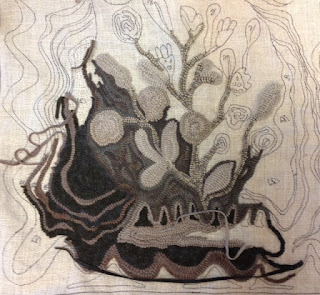 Cindy's rug looked amazingly old - and she is a ridiculously fast hooker: 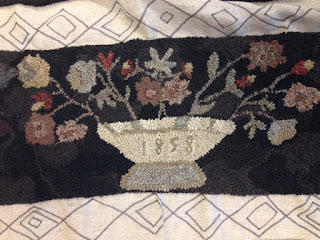 There were lots of other great rugs - I got sidetracked taking a picture of the fabulous lunch Jim was preparing and missed getting pictures of the rest. Lunch was beautiful, too - you can see why I was distracted! 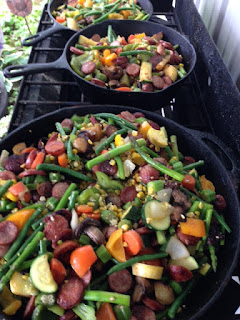 This delicious lunch came from Jim's garden (he even claims to have grown the sausage!). As usual, all of the food was wonderful.  It was a great weekend!
Posted by Dana at 6:05 AM 1 comment:

It's hard to believe it is already July - and that it's been a month since my last post! I just can't seem to keep up with things this year. I am really ready for things to slow down a bit...I need a "real" vacation instead of these one- and two-day breaks I have been taking.

While I did a pretty good job of focusing on wrapping up UFOs the first part of the year, I fell off that bandwagon somewhere after Paducah and have been starting new projects ever since. There's the new BOM for guild (which really shouldn't count, right?) - I finished the July block a couple of weeks ago. I love these blocks because they are so easy!  This one only took a couple of hours to complete. 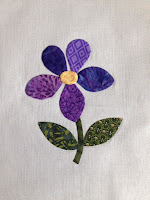 I need to decide what my final layout will be for this quilt so that I can figure out which blocks will have laurel wreaths. I would like to start adding those as I go along rather than doing them all at once. I am not good with repetition.  If I wait until the end this will be a UFO forever!

I attended Kansas City Quilt Festival a couple of weeks ago. It was very nice. Quite a few of the prize-winning quilts were ones I had already seen in Paducah, but there were a number of others I had not seen before.  There is a lot of talent in the KC area!  One of the quilts that really fascinated me was made almost completely from selvages. 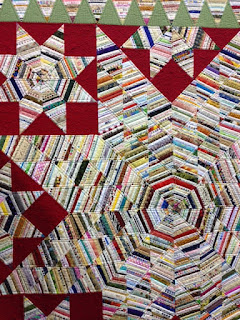 I couldn't get a complete picture as there too many people admiring it, but the quilt was large - probably at least 75-80" square - and had the smaller stars all the way around the center star and then selvage diamonds all the way around the outside of the center square. It was unbelievable!  I'm guessing this lady had all of her friends saving selvage for her - there were thousands of them!

I took a couple of days off last week and got a strong start on a new project I found at Homestead Hearth during this year's Super Bowl sale. I was standing at the register checking out when I looked up and saw this quilt on the wall.  It was published in McCall's Nov/Dec issue (which I had not read at the time).  I fell in love with it immediately and had to pick up some of Edyta's fabrics to make one myself. 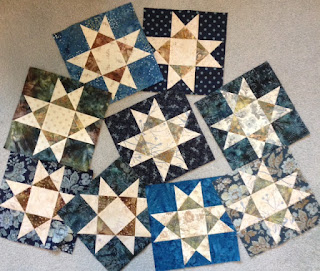 I completed all of the star blocks last weekend and cut all of the setting squares this weekend.  I need to figure out the layout before I can start sewing the rows together. The pattern doesn't have a border but I have a LOT of extra fabric (they didn't have kits left, fabric was on sale 25% off with a one yard minimum cut, so why buy a half yard for $5.50 when you can get a whole yard for $8.25...you know how it is!) so I am thinking of piecing a border for it. I have always wanted to do a piano key border. I need to do a mock-up on the computer to see if that will work....I don't want to overpower the center.

I tried my hand at a little paper piecing over the holiday weekend. I have been collecting Judy Niemeyer patterns for years and after seeing a bunch of them at the KCQF I am really wanting to work on one. I have not done any paper piecing in years so I decided to start with something a little less overwhelming than a Judy project. This is the center from a Kim McClean pattern I ordered recently. 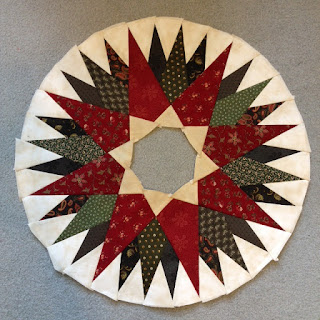 The center circle has broderie perse applique. I started on that yesterday but didn't get very far.  I can't say that I am a big fan.... 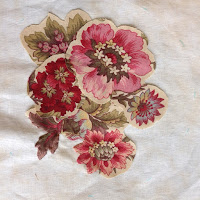 I'm going to stick with it though as it is good practice for my Rising Sun.  I am actually using the same fabric for some of those flowers so I need to figure out how to manage all of those spiky edges.

This week's plan is to choose a pattern for my workshop with Jayne Hester next week. I have so many rug patterns in my stash that I do not want to buy anything new. The trouble is finding one that suits Jayne's style and that I don't already have a plan (and wool for).  It isn't going to be an easy task!
Posted by Dana at 5:53 AM 2 comments: