Most Productive Retreat Ever!

I'm a little slow with this post - my retreat is really a distant memory after the crazy four day, 60-hour work week that followed it...  The weekend before last I went on a four-day quilting retreat with friends.  It was probably the most productive retreat I have ever had!  I took along multiple projects - a couple of which I never touched - but I did manage to finish one top and nearly finished another.  Both are on my top twelve UFO list so I am off to a strong start for the year.

I originally wasn't in love with the teal cornerstones in the Grand Illusion mystery quilt setting and had started using black instead.  Then a very creative quilter posted a slight variation of the pattern on the Quiltville Facebook page and my mind was changed - the simple addition of a teal inner border completely pulled it together!  She also added a couple of other 2" borders that increased the size to around 96" square which worked better for me.  So, following her lead, here's what I ended up with: 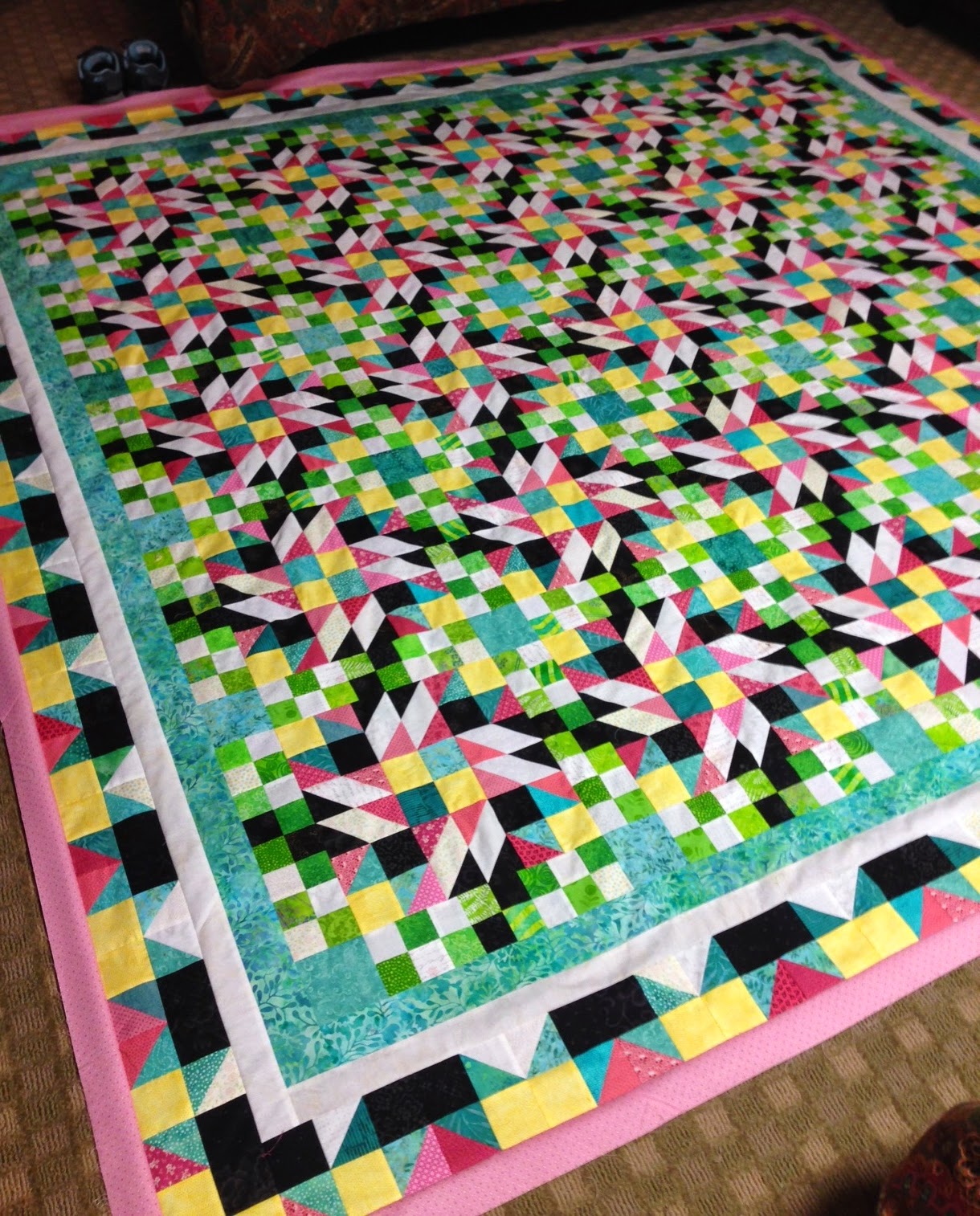 I absolutely LOVE it!  I am very happy with how it turned out, crazy bright colors and all.  I decided that I will use some black batik that I have on hand for backing. Now I just need to find a quilter....

After that top was complete, I moved on to my LeMoyne Stars. I had ordered a couple of pieces of Japanese taupe fabrics from Homestead Hearth as possible sashing and luckily one of them worked out well.  The blocks were a bear to work with!  I have definitely learned an important lesson about hand piecing - cut the outer seam allowances really large!  I will also pay better attention to where the bias falls next time.  After all of the handling in piecing the outer edges were a little off-square and required a lot of finessing to get right.  By the time I got the center together I was too exhausted to deal with the outer borders. It took the better part of two days to get it to this point: 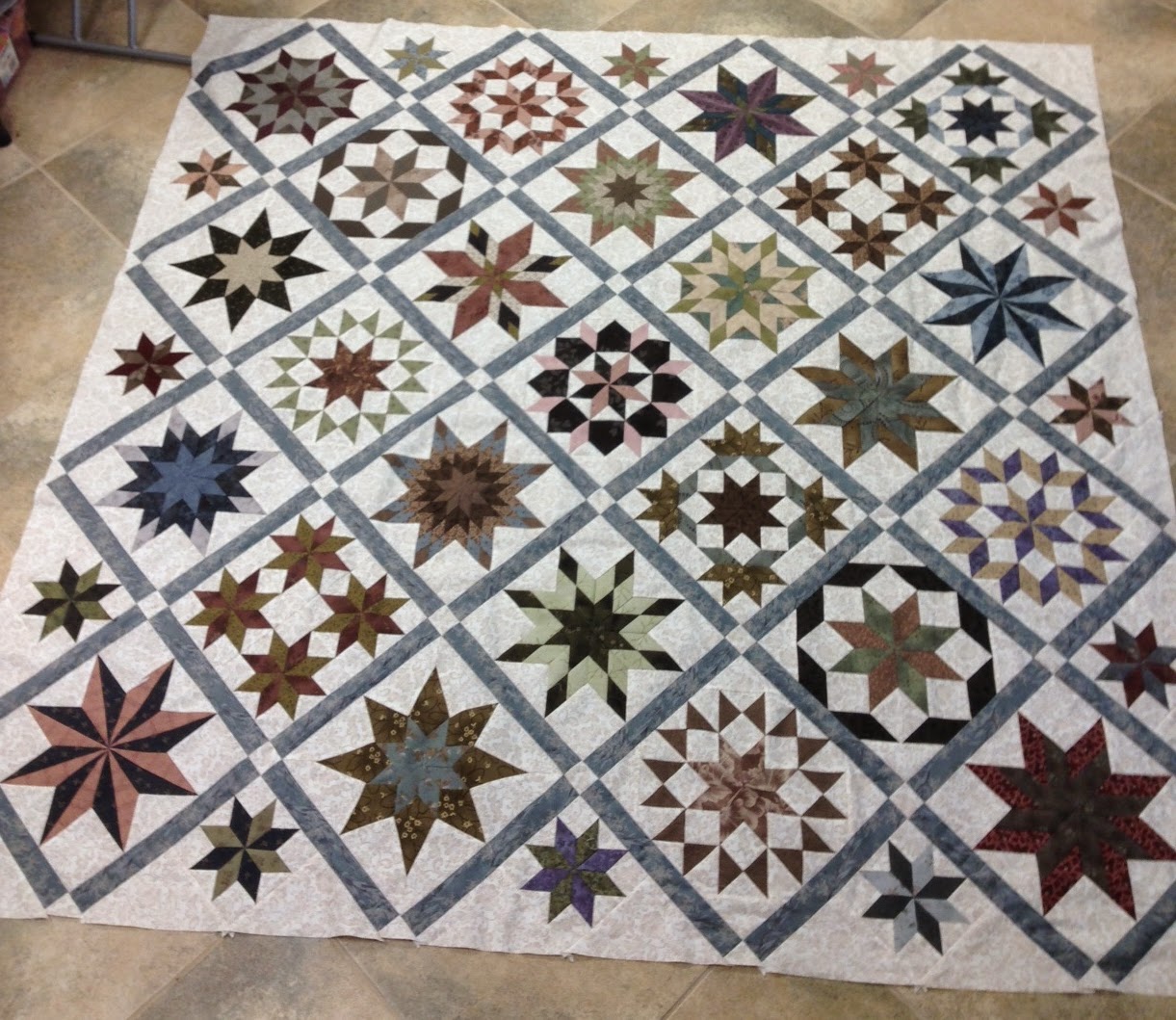 I am very happy with how it is turning out!  I have two more borders to add - a 2" blue one (the same fabric as the sashing) and a wide (6") one of background fabric - and then it will be ready for quilting.

This past weekend was our annual Wool Club Camp at Nola's.  I didn't accomplish much - it was very crowded and just not conducive to working on my giant rug.  I also think I was too exhausted from the week and too distracted by a rescue puppy I fell in love with on Facebook (she's still available and I am trying to control the impulse to call about her....) to do much hooking.  Here's a peek at where it stands currently: 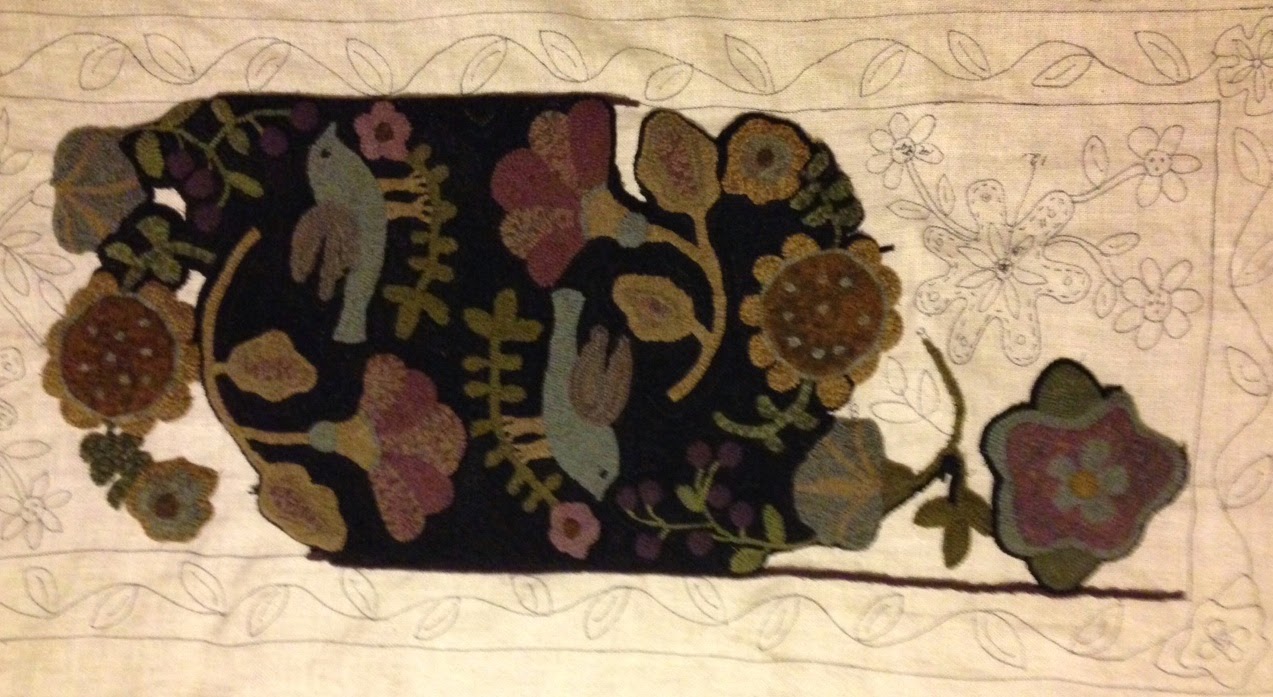 I still have quite a way to go, but I am making progress. I also made some progress on a couple of other projects this week, one which is on my UFO list and one that is not.  I made a bit of progress on the second diamond wedge for my Rising Sun while flying to and from New York this week - it wasn't picture-worthy.  Over the weekend I pulled out a project that has accompanied me to several retreats but returned home untouched - My Garden Album.  I did all of the scrappy cutting for the sashing blocks and even started piecing them. 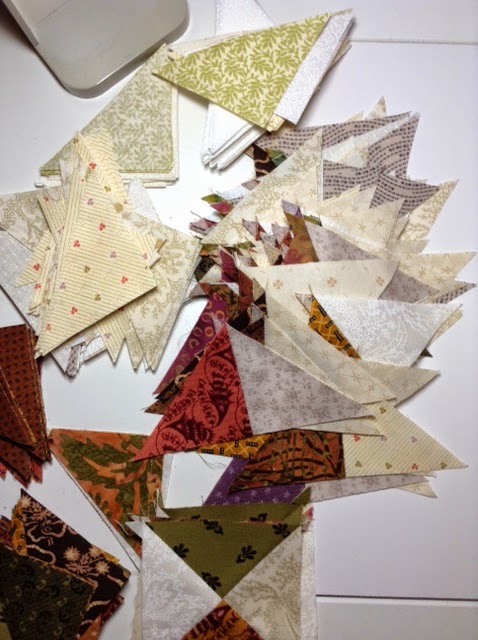 At this point they are just a messy pile next to the sewing machine, but it's a start!  Considering I have had all of the applique blocks finished since 2010 or so it's about time to get this thing together.

All things considered, I feel like I am off to a strong start for the year! There are about three new projects calling my name but I have resisted temptation thus far...  And then there's that puppy...Not sure how long I can stay strong!
Posted by Dana at 6:23 AM 2 comments:

I haven't had a lot of time for slow stitching this week as I have been pushing to finish my Grand Illusion Mystery (which still isn't finished, by the way!).  This week I pulled my baskets out from the depths of the UFO pile and, after checking to verify I could still find the fabrics I was using - there was a brief moment of panic involved, but I found them - I started stitching little basket again. I managed to finish two:

This brings my total to 23.  I was convinced I was in the 30s when I sat them aside.  I wish I could say there might be more around here somewhere, but I am pretty sure this is it. 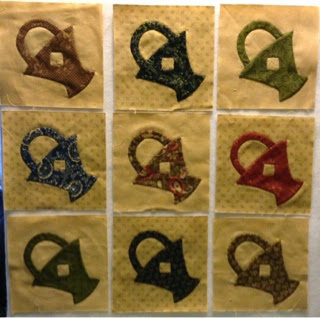 I am not nearly as far along as I thought....  I think I need over 250 for the quilt.  This project is definitely slow... I just have to finish before I stop liking the fabrics!

See what other slow stitchers are doing on Kathy's Slow Sunday Stitching link-up.
Posted by Dana at 2:51 PM 3 comments:

It's that time of year again - that time where I set a bunch of goals that I don't achieve. I've never really been into resolutions, but I am a proponent of setting goals, even if they are a stretch. I actually made pretty decent progress on my 2014 plan to reduce my backlog of UFOs. A couple of quilts I started in 2012 are currently at the quilter (they've been there since June!), a couple more are much farther along than they were at the beginning of the year, and I made a decision to part ways with a bunch of older projects I am no longer interested in. This year I have been inspired to create a "Top 12" UFO list by a blogger I found through Bonnie Hunter's Monday Mystery Link-up.  I'm not promising that these will be the only projects I work on, and I am certainly not committing to not starting anything new (I already know of at least two projects I will start this year!), my goal is to make significant progress on the projects on this list. 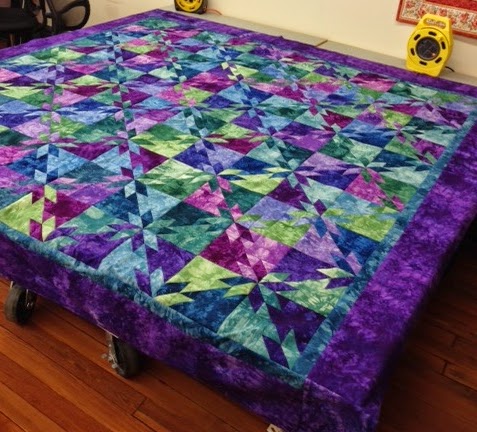 1. Hunter's Star - easy one; just needs to be bound and labeled when it returns from the quilter 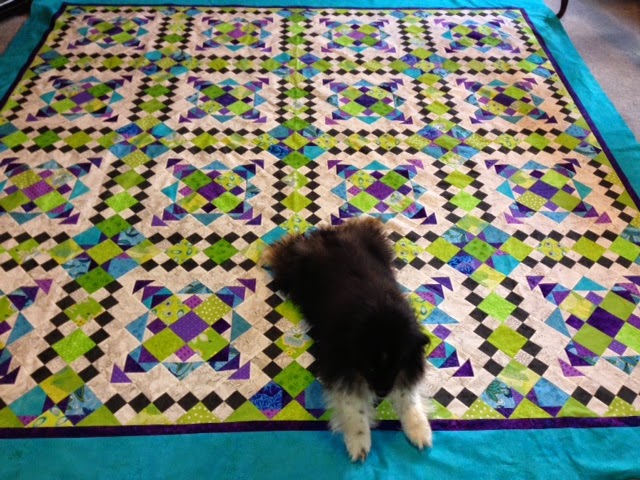 2. Easy Street - another one that just needs to be bound and labeled when it comes home

4. LeMoyne Star - sashing fabric ordered; hoping to start assembling soon (this won't be the final layout...when I finally got the dog to get up off of the blocks I saw that I had two of the same blocks right next to each other) 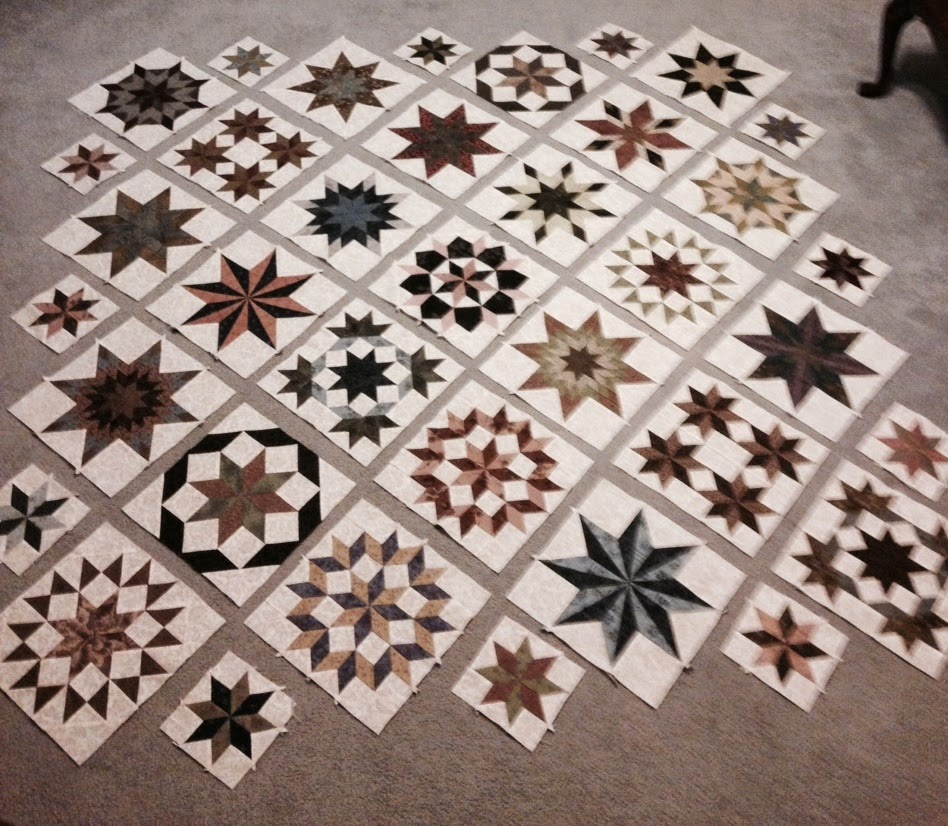 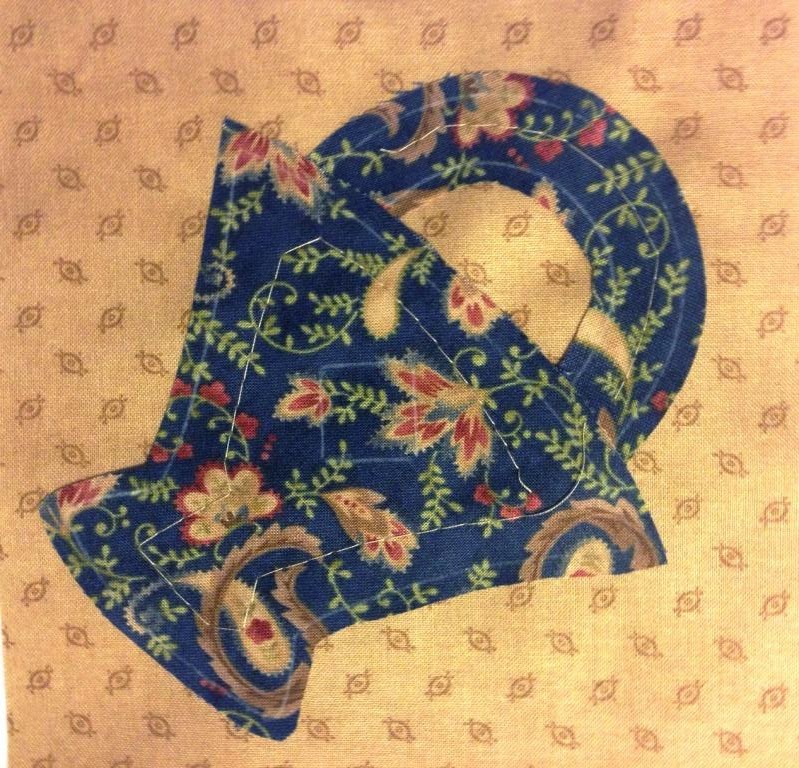 11. Blessings Quilt - another project I completely love and want to get back to 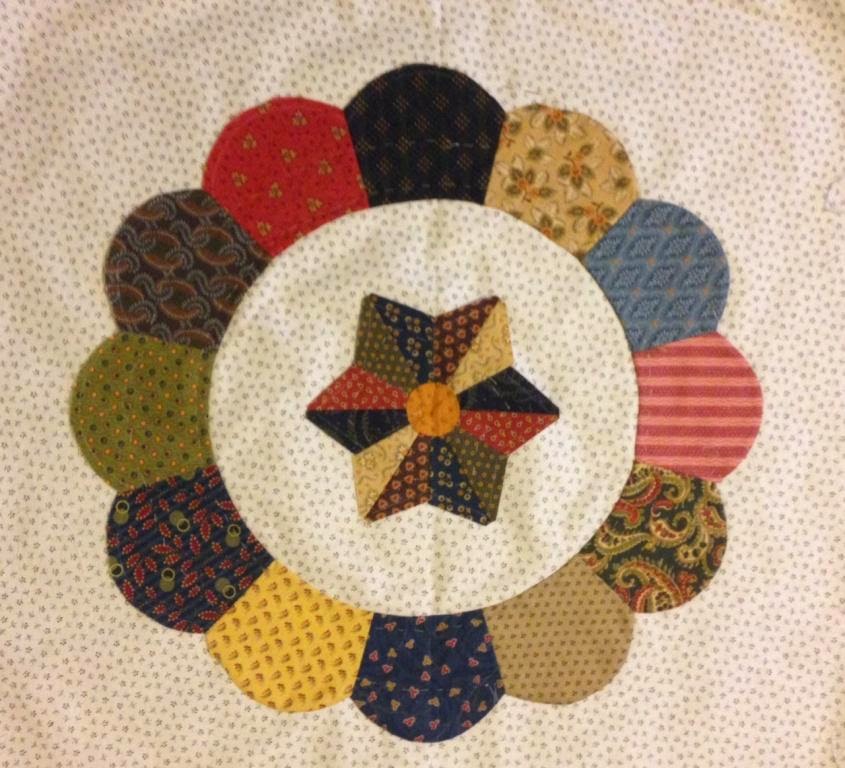 12. Tree Skirt BOM - mainly because I desperately need to replace the sorry excuse for a skirt that I have been using for 25+ years 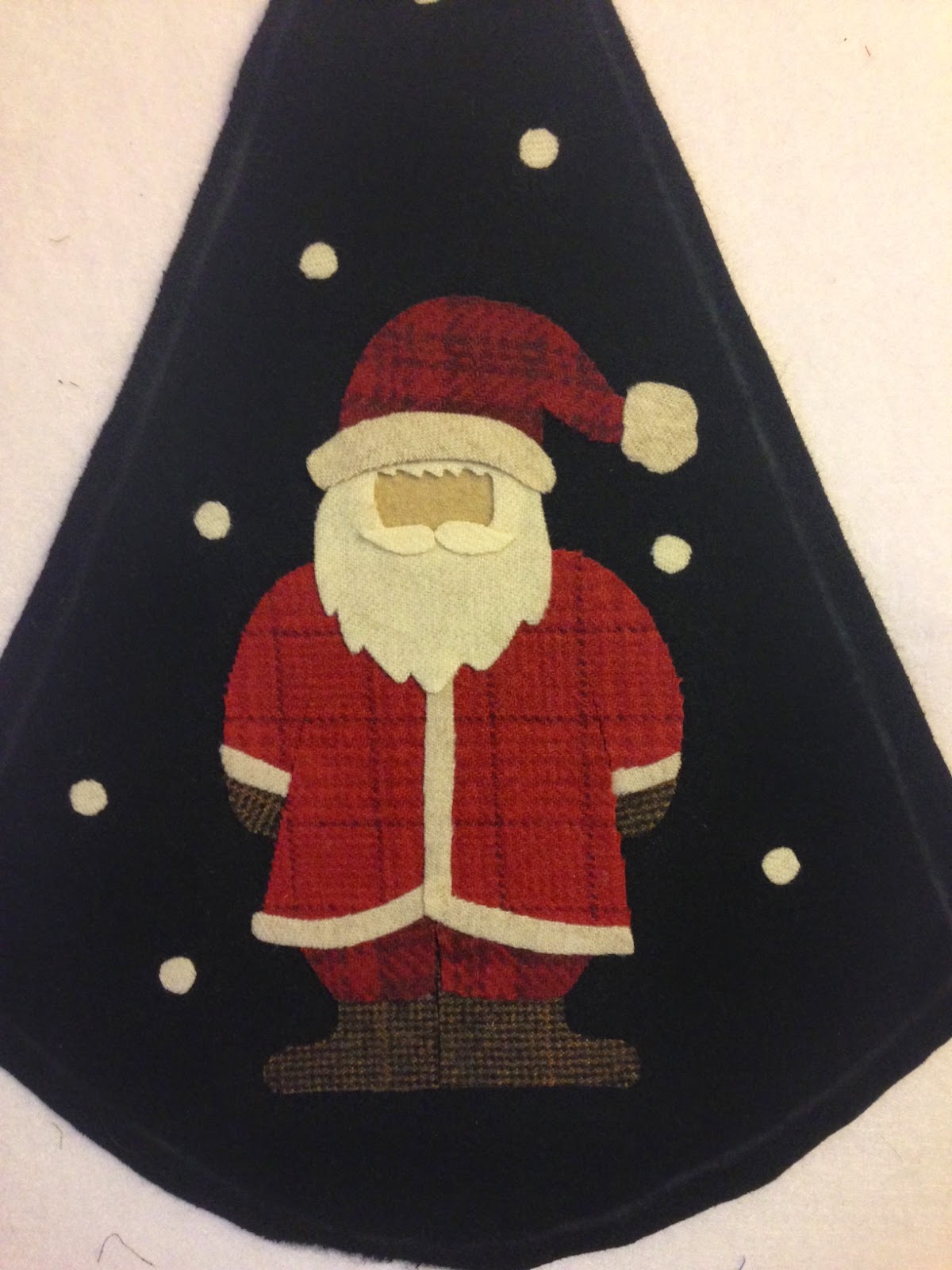 My Memory Bouquet project was a runner up for the list - I finished two blocks over the holidays. We are doing nine blocks of this one as a BOM for our quilt guild. I have a feeling that after I have finished the nine this one will sit for a while. 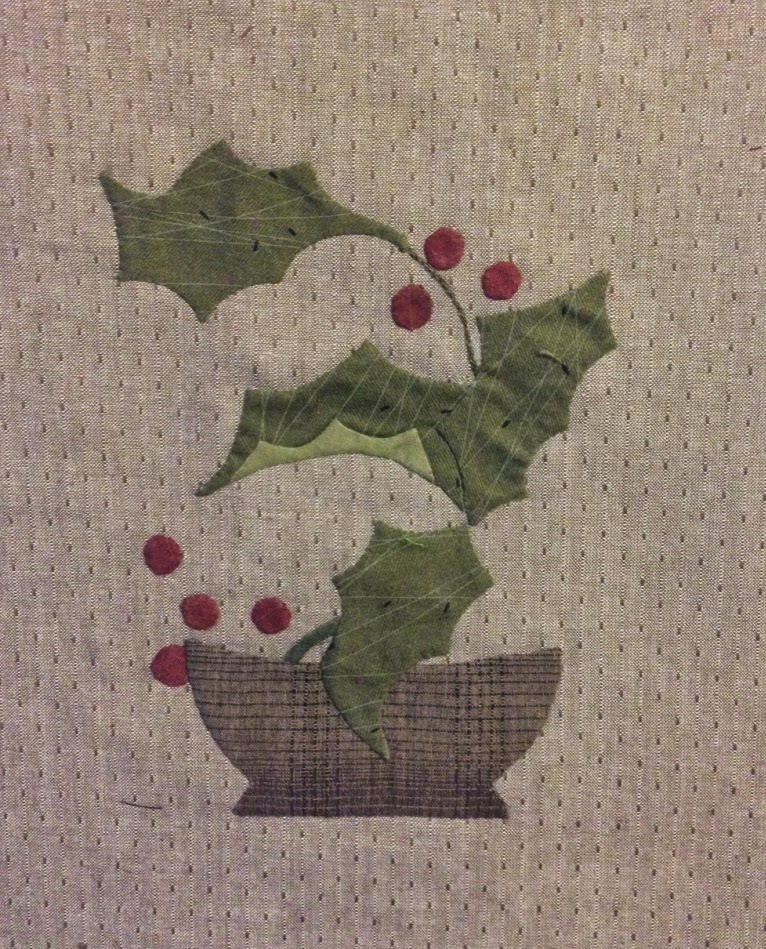 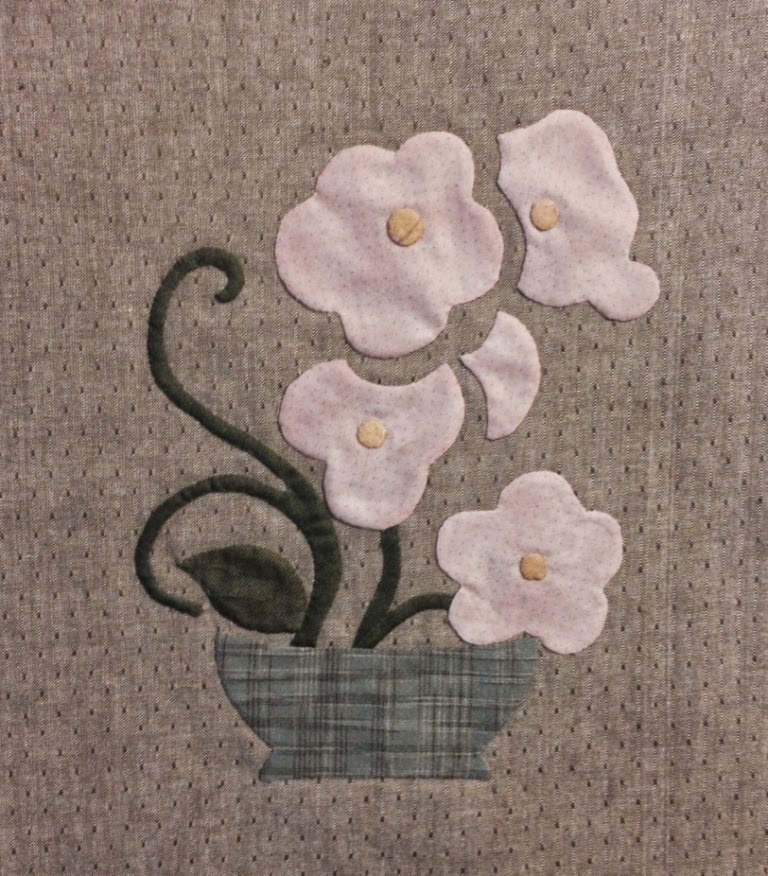 On the rug hooking front, my goals are simply to finish Stacey's Floral Runner (the gigantic rug I am currently working on) for the April 25 rug show and then to finish Grandmother's Garden (another gigantic rug) before my November workshop with Sally Kallin.

The solution to the Grand Illusion Mystery was revealed at midnight EST on New Year's Eve and it appears that some dedicated participants started sewing right away - I was amazed to see completed tops on Facebook when I woke up New Year's Day!  Many other finishes have been posted since then - I am amazed!  I wasn't sure how I felt about the layout at first...when I assembled some of my pieces to look at how my version came together I was not loving it. My teals and greens really don't play well together!  I auditioned a couple of other colors for the cornerstones (black and yellow) and decided black worked best. The teal just wouldn't work that close to my greens. 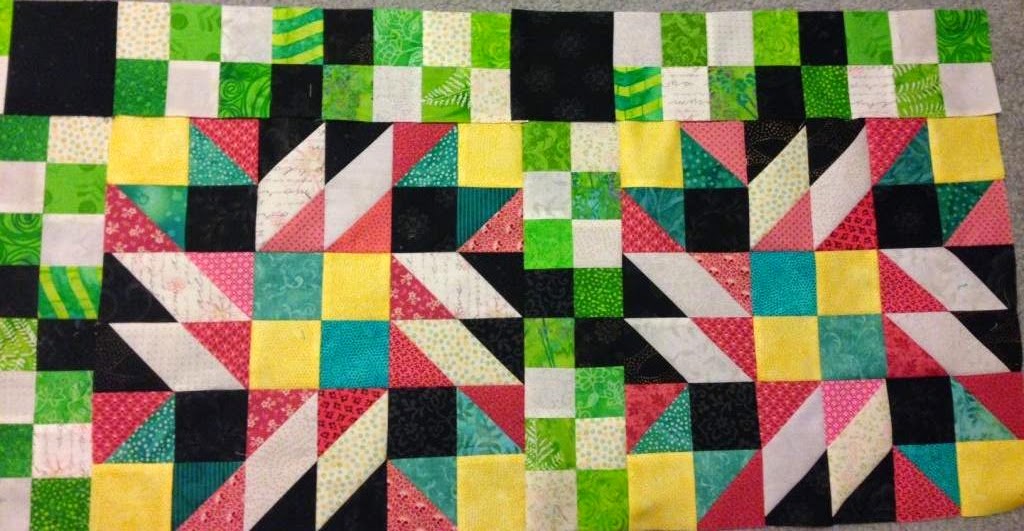 I managed to finish various parts of the top but am nowhere near having it all together.  All of my center and sashing blocks are assembled, and I put together part of one row just to see what it looked like. 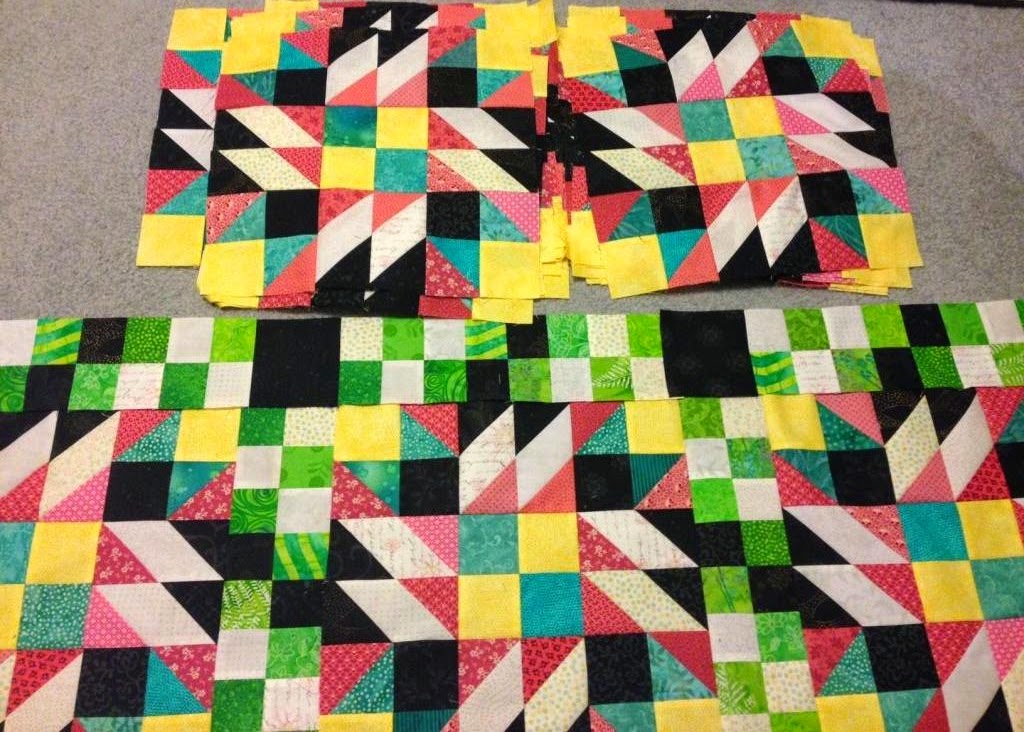 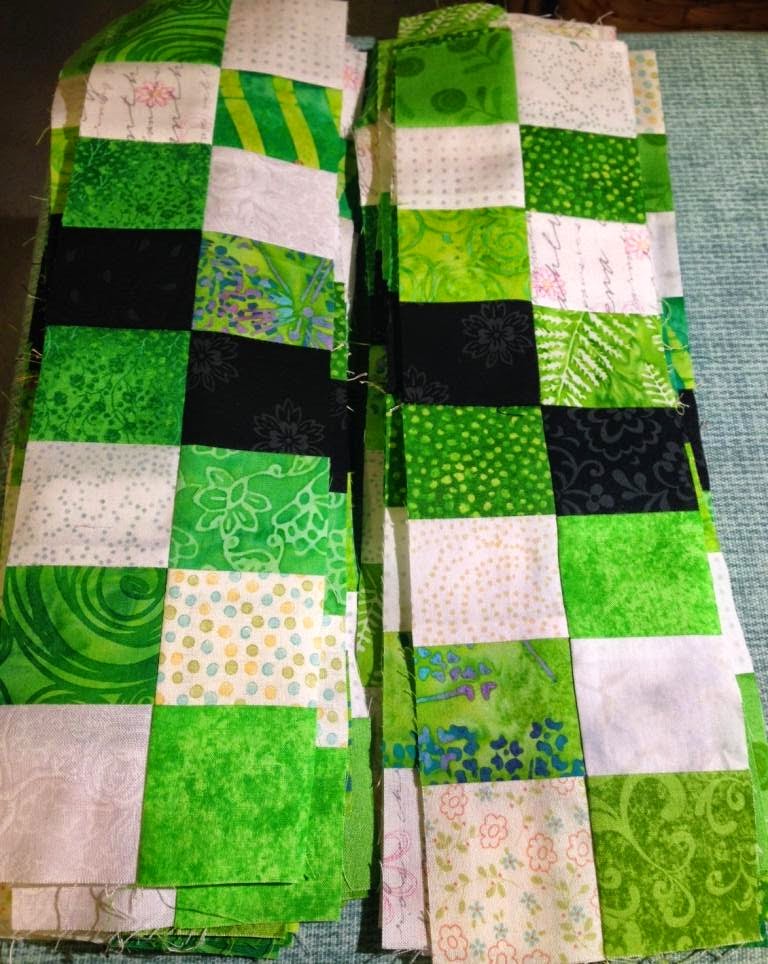 It is definitely bright! Blinding, perhaps.... But the more I looked at it laying on the floor of the sewing room, the more I liked it.  It is certainly different from anything else I have done!  I'm back to work today so progress will be much slower, but I hope to keep plugging away at the rows and have the top together in the next couple of weeks.

The Monday Link-up on Bonnie's blog is already full of finished tops - people amaze me!  It's fun to see how  the alternate colorways came together and how different they all look!