We were planning to kick off our local TAS chapter's 2015 challenge last Saturday but the weather had other plans. Our challenge this year is to each choose a project we want to make progress on this year and commit to work on it each month and share progress. It was really tough to decide what project to choose - I have so many in progress (and of course would like to work on them all!) and there is a new project I have been dying to start - more on that in a minute. After considerable deliberation I decided to choose my blocks from my classes at Baltimore on the Prairie last year. Each year when I get home from the conference I promise myself that I will finish at least one of the projects and take it back for show & tell the following year. I've yet to finish a single class project.  Sad, isn't it? So I am thinking this year will be my year - I should be able to complete at least one of these blocks by September! 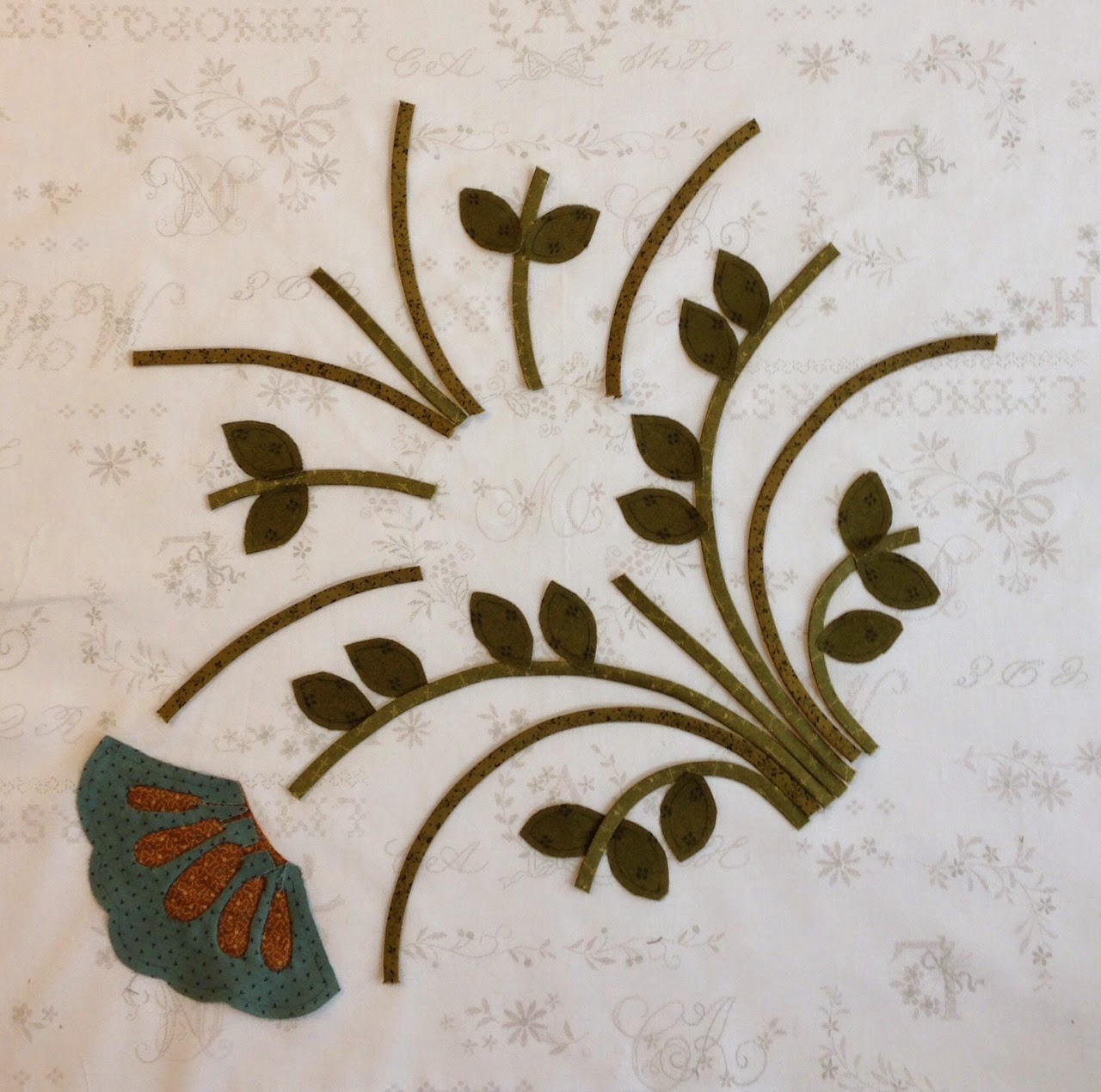 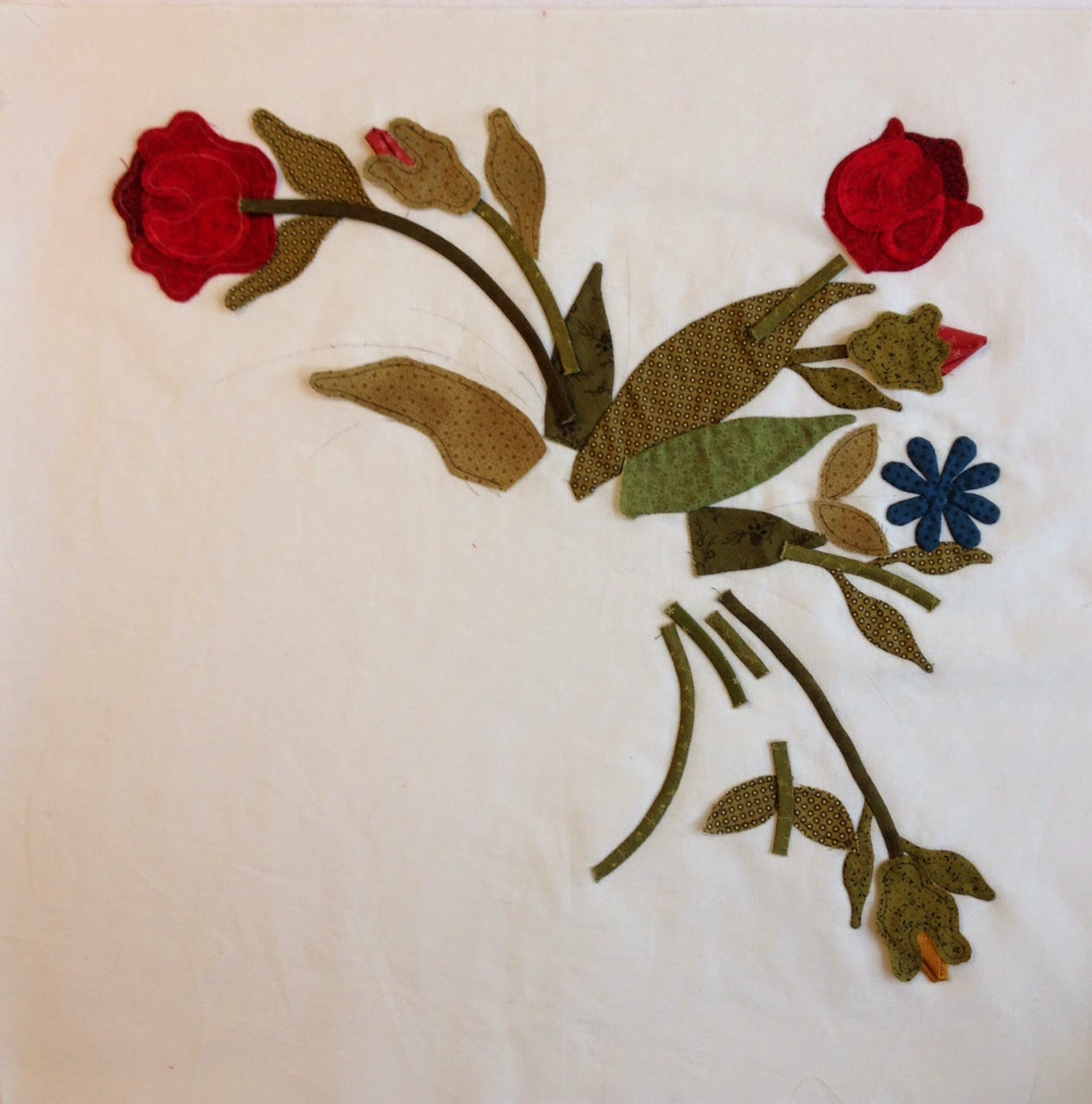 Unfortunately they aren't very far along - most of that is glued in place. Both blocks were from workshops with Sue Garmin and she believes in glue basting as much of the block as possible before beginning to stitch. The top block is part of a four-block wall hanging (all the same block). Note that I am not committing to getting all four completed, just the one.  The bottom block is the first pattern from a new Baltimore album pattern Sue is designing.  I will be taking workshops on two other blocks from this quilt in September.

Back to the new project I've been wanting to start...  It all started with a picture on Facebook.  This quilt, done in mostly (perhaps all?) Jo Morton fabrics with no fabric repeated more than three times really spoke to me. I love it! 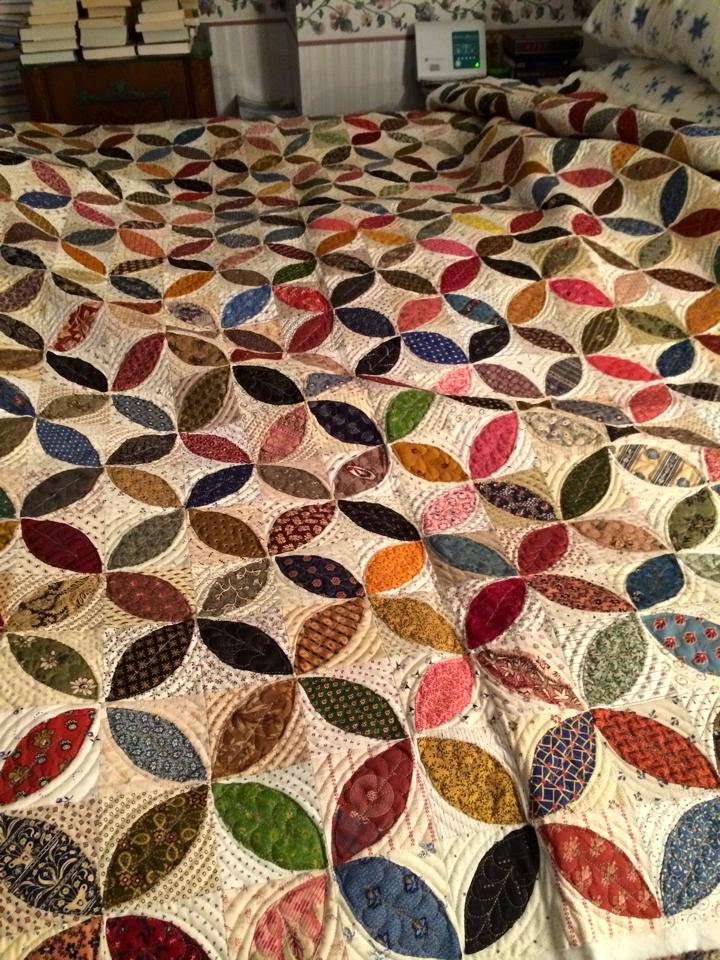 I'm not planning to set any limits on fabric repetition, particularly for the backgrounds, but I am going to commit to doing it all from stash. I prepped about 10 orange peels last week to get things started. 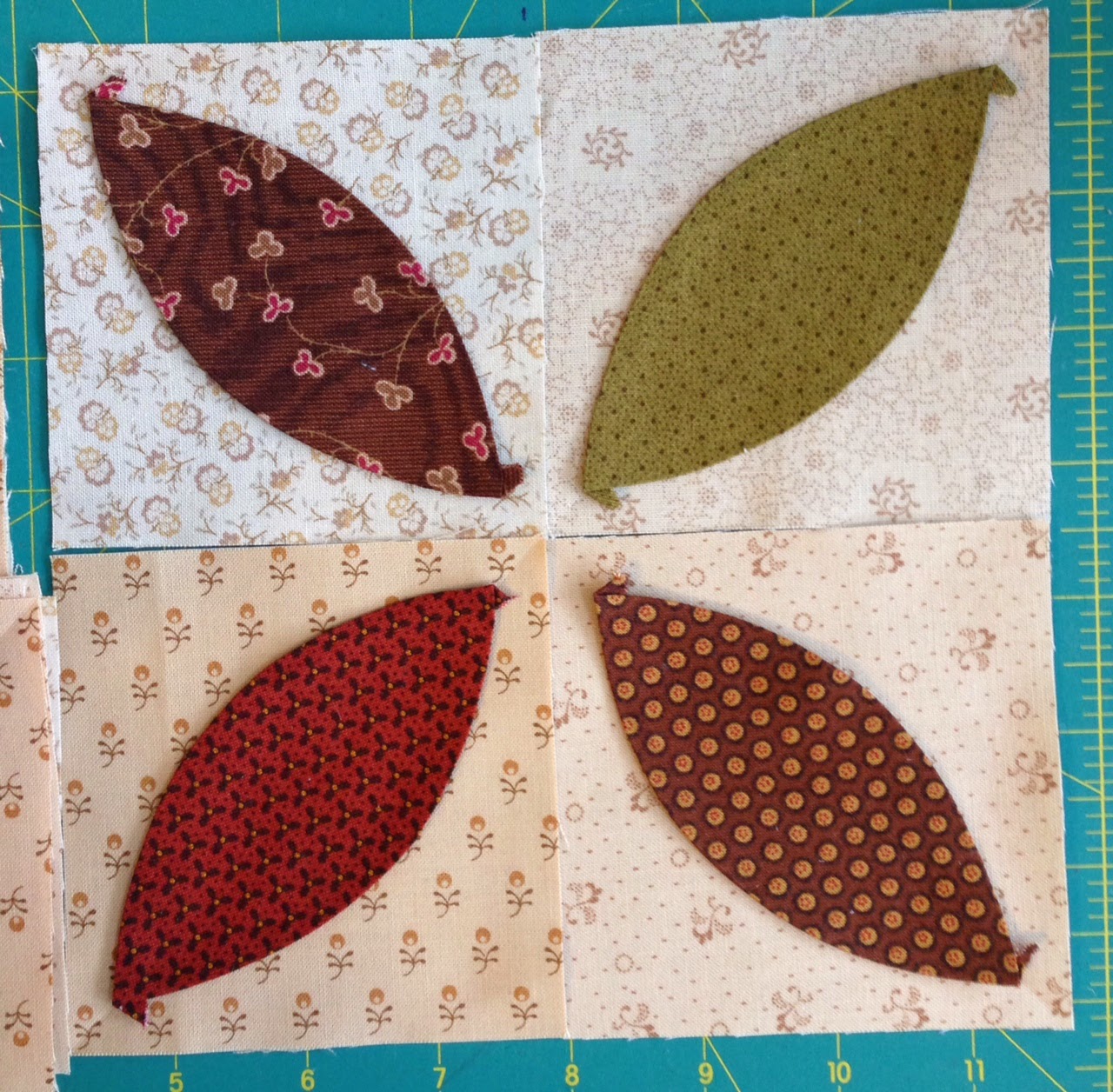 I'm using the starch prep method for these since placement is critical.  I cut my own template out of heat-resistant plastic but always have a tough time getting them exactly right and perfectly smooth, so this week I contacted Brandi's to see if they could make what I needed. Three days later a box of perfectly-cut mylar templates appeared in my mailbox. That guy is awesome!  I can't wait to prep more - these will be great for travel.

Speaking of travel, I learned the hard way that it is impossible to work on a large applique project on a completely full 737.  I had started working on my house quilt again at a recent day retreat I attended and was so excited that I was making progress on it that I decided to take it along with me on a business trip.  I managed to sew a couple of leaves down on the way down to Tampa (also a full flight, but I had a window seat), but found it impossible to stitch while sitting in an aisle seat on the way back. I will not be trying that again!  I have been making progress nonetheless and hope to be ready to put borders on within the next month or so. 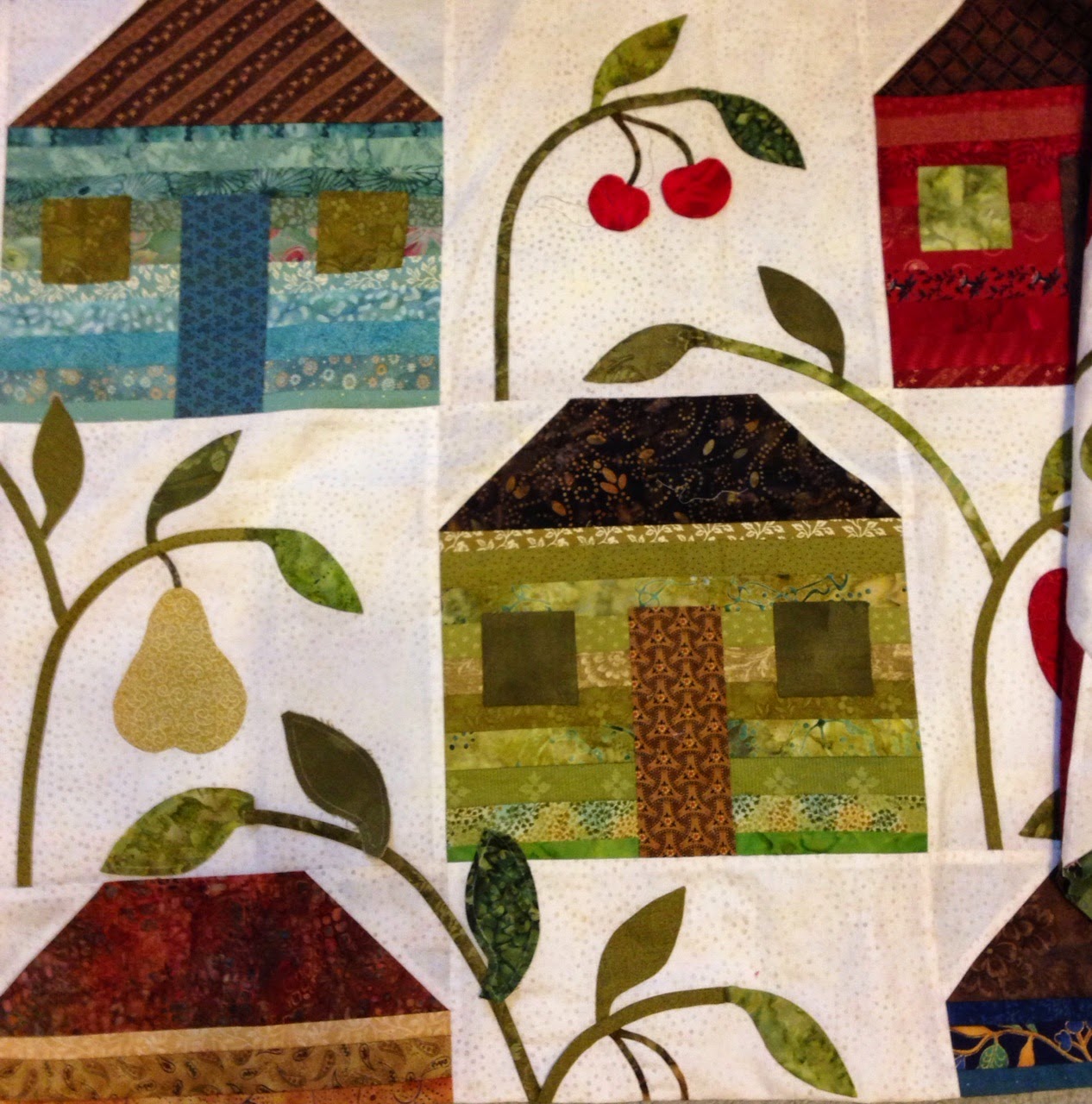 I hope to get a lot of sewing done this weekend.  I finally picked up my quilts that I sent to the quilter last July so I have a lot of binding to sew on, and I have to get the borders on my LeMoyne Star and piece or purchase a backing so that I can get it to the quilter. Looks like I am going to be stitching a lot of binding before the quilt show!
Posted by Dana at 12:13 PM 7 comments: