The past week has been a bit crazy with a lot of driving and quilty fun. I will likely have to spend a good portion of my holiday weekend catching up on work with all the days off but it was worth it!

Last weekend was Spring Quilt Market, held in St. Louis this year. Irene Blanck came to town for Market and took time out on Friday to come to O'Fallon to teach her clamshell technique. I realized at the end of the class that I completely forgot to take any pictures of Irene or the workshop, but I did manage to get this one of her quilt: 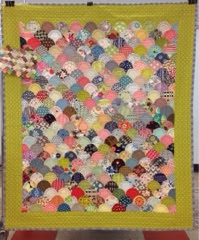 I really enjoyed the workshop and am looking forward to seeing Irene again next year.  She is a wonderful teacher!  I have always wanted to do a clamshell quilt.  My favorite layout is the one with the alternating light rows. Here's what I have so far (just basted, not sewn yet): 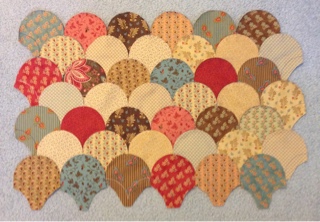 I'm not entirely sure that my light row is coming across as intended due to the lack of contrast with some of my "darks", but I really like it.

On Tuesday morning I hit the road for Hamilton, MO to attend the first annual MSQC Academy. It was a great event!  There was a lot that could be improved upon - some of the classrooms were way too small, the "make and take" classes were so popular that people lined up an hour in advance to get in, etc. - but overall they did a fantastic job pulling it together.  The sessions were a combination of demos, trunk shows and hands-on classes, sort of like a mini version of Market Schoolhouse.

One of the first sessions I attended was a make and take (sort of as there was no room to actually work on the project) with Leoni Bateman. The project was a little pin cushion that was part of this new pattern set she released at Market.  She gave a presentation on her wool applique technique. 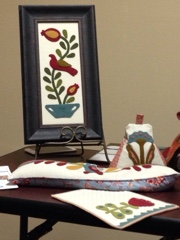 I took lots of pictures - so many that I am forgetting who showed what! This is a new BOM from Bonnie Sullivan who was there promoting Woolies flannels. It is adorable! 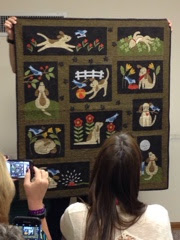 This upcoming sew-along from Lori Holt was introduced along with many other patterns and fabric lines at the Riley Blake/Penny Rose trunk show. 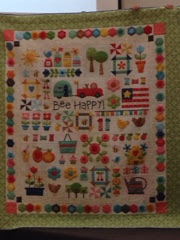 On Wednesday morning I started the day with another clamshell workshop, this time with Sue Daley. It was another fantastic workshop - Sue is very entertaining and a very good teacher! 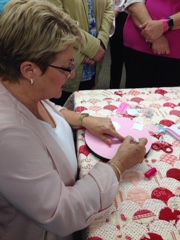 Her technique was different from Irene's in that she does English paper piecing, but I really liked it as well.  She had a couple of great tricks, too - and got me to try (and kind of like?) a size 15 milliners needle!  I have been using sharps for applique for years so there was a bit of an adjustment period as these needles are about three times longer than what I am used to.

Another session I attended was put on by Liz of Lizzie B Creative. She told the story of how she and her sister-in-law (both named Elizabeth Ann Hawkins) started their business and their adventures in creating their booths for Market, and how a retreat at MSQC changed her life.  In September of 2015 she and some of her designer friends from around the country met at MSQC for a sewing retreat. Liz noticed that the little bakery next to the retreat center was closed and learned that they were having trouble finding a baker to run it. She loves to bake and had always dreamed of owning a bakery. A little over a month later she and her family had relocated from Philly to Hamilton and in January of 2016 they opened Mama Hawk's. She has fixed the little shop up in her colors and style and even sells her books and patterns there. It is adorable and the food was fantastic! 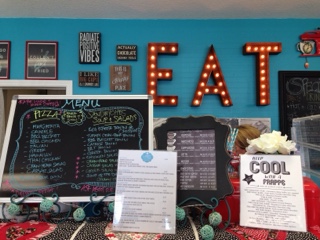 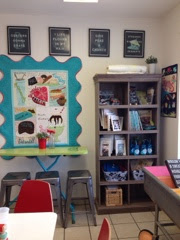 The event closed with a trunk show by Sue Daley. She was a great speaker and her presentation was very entertaining!  She showed lots of quilts, including new ones created for Market. Here is one that she and Leone (aka Marge & Flo) each put their own spin on (Sue's version is on the left, Leone's on the right): 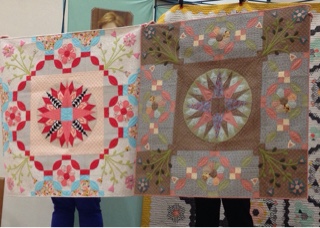 She showed several of her new projects done in her new Linen and Lawn fabrics. Here are just a couple - the bottom one is my favorite. 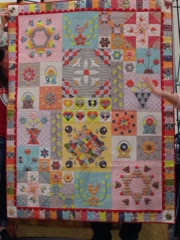 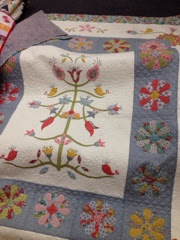 I am looking forward to spending more time with my clamshells over the long weekend. I am still racing to complete binding two quilts for our upcoming quilt show (okay, not really racing - moving slowlyand complaining all the way!) and have some catch-up to do on Triangle Gatherings blocks. I am ready to sew!
Posted by Dana at 6:23 AM 2 comments:

Wow - April really flew by!  I can't believe it's been a month since I posted. May is promising to be the same with quite a bit of travel so next month's progress report is likely to be a bit weak. I have plenty of progress (complete with terrible photos) to report for April, however!

I really, really hoped to be able to say that my Allietare quilt (Patchwork Times UFO) was completed this month but I finally had to give up and head to bed last night with about 20% of the binding still needing to be stitched down. I hope to have that one completed within the next couple of days, particularly since I have two more queen-sized quilts to bind and put sleeves on before our guild's quilt show in June.

I am happy to report very significant progress on my APQ UFO - my Disappearing Nine Patch.  I finished the top yesterday. This quilt was started as a block exchange with my bee and I added to it to make it larger.  The finished size is about 85" square. I thought about adding a solid border to make it a good queen size but I kind of like it without.  I already have the backing for this one so I hope to get it quilted soon. 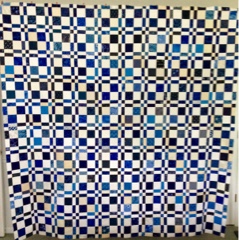 Last week was my annual trip to the AQS show in Paducah. I know they are starting a second show this year but I am planning to abstain from that one as a form of silent (and completely unnoticed, I'm sure) protest. I find it really sad that AQS has expanded to so many shows that none are really special anymore. I know it is partly because I just don't need as many things these days...or am at least somewhat facing reality about how many projects I already have...but my stays in Paducah keep getting shorter.  This year I was out of things to do by the end of the day Wednesday and decided to come back a day early. With hotel rates increasing nearly 50% for nest year I may be down to a one nighter!

I did have a lot of fun while I was there, including taking a class with Nancy Mahoney. I fell in love with a pattern she published in the Jul/Aug 2009 Fons and Porter magazine and purchased a bunch of thirties fabrics to make it. When I saw she was teaching the pattern in Paducah this year I had to sign up.  I finally cut into the fabrics and made the first block.  The blocks are 16" finished so there are only 12 in the quilt. 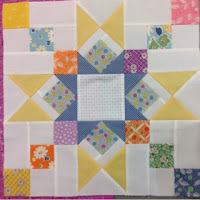 I find using thirties fabrics really challenging for me. They are way outside my comfort zone!  I plan to get rid of them all when this quilt is finished.  I can only see doing this once!

I visited Lisa of Primitive Gatherings a couple of times during the week and was able to get an advance sneak-preview of the Summer BOWs. I absolutely LOVE them!  I can't wait for them to begin - I am definitely signing up! And speaking of Lisa and PG, I spent Friday catching up on my Triangle Gatherings blocks. She's releasing them so quickly that I am almost out of prepped triangles again. Time to starch more squares! 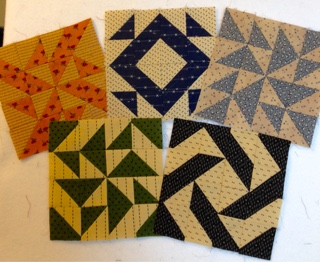 This month's UFOs are Disappearing Nine Patch (Patchwork Times this time) and En Provence (APQ).  If all goes well I may be able to get at least one of them quilted. At a minimum I will make a final decision on whether to add anything more to En Provence. It's an odd size - definitely a small queen. But I really, really hate borders....