I had a fantastic time retreating in Paducah with a few friends last weekend.  We stayed at the relatively new Quilt in a Day Retreat Center. Despite a couple of issues (spotty wireless and a leaky ceiling in one bedroom), the place was fabulous!  The sewing area is spacious and well-lit and there are so many wonderful places to eat.  We thoroughly enjoyed the food! It is difficult to get a good picture of the place because it is really long, but here's the view from my table... 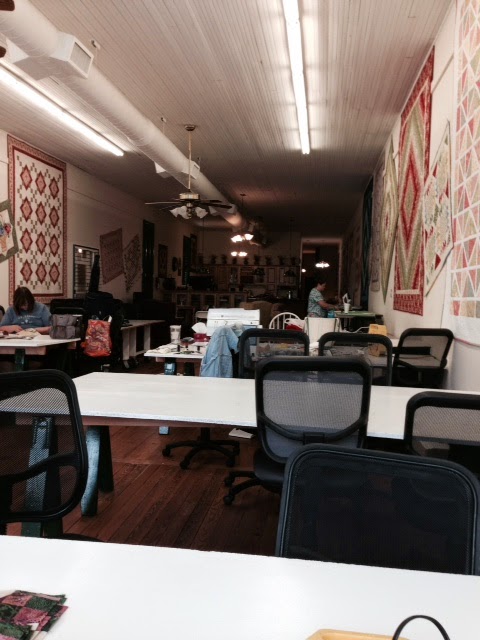 I was able to get a lot of sewing done - not as much as I had hoped, of course, but I am very pleased with my progress. I managed to finally finish piecing my Orion's Star. 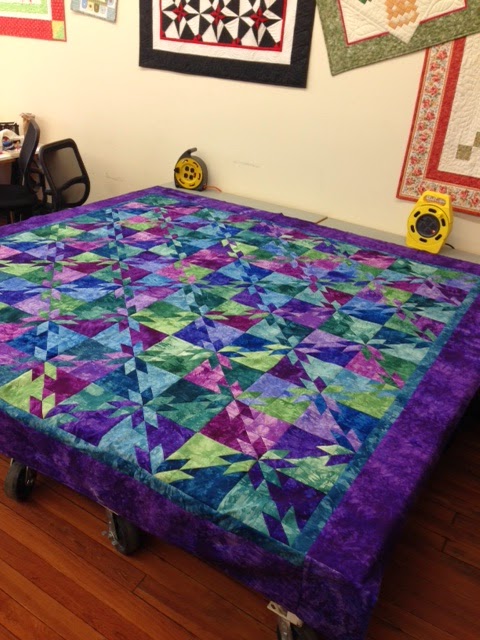 As luck would have it, they had the perfect batik for my backing in the Quilt in a Day store (and it was only $8 per yard - a steal for batiks these days!). 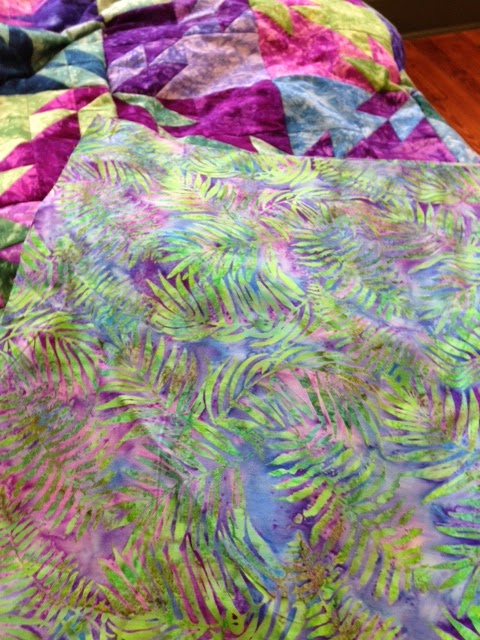 I'm hoping to be able to drop this one off with the quilter at the beginning of July along with my Easy Street top which has been laying in my sewing room floor for ages.

My second project for the weekend was my Celtic Solstice.  I started by piecing the 40 blocks with the 4 patches. 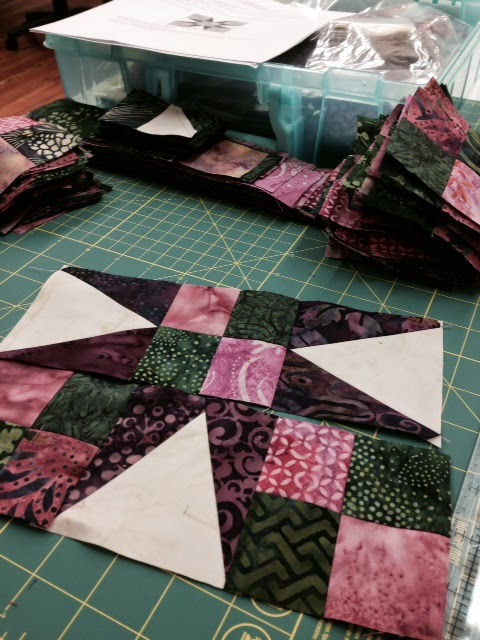 I managed to finish all of these and then moved on to finishing my chevron pieces for the alternate blocks.  I did take a break to lay out the two setting options and gather opinions from my friends. 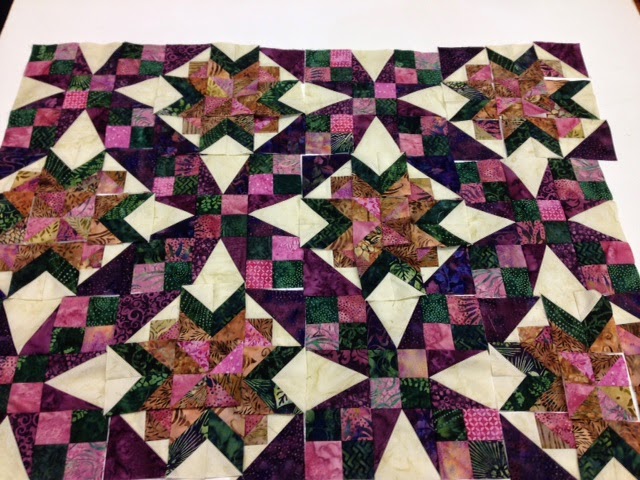 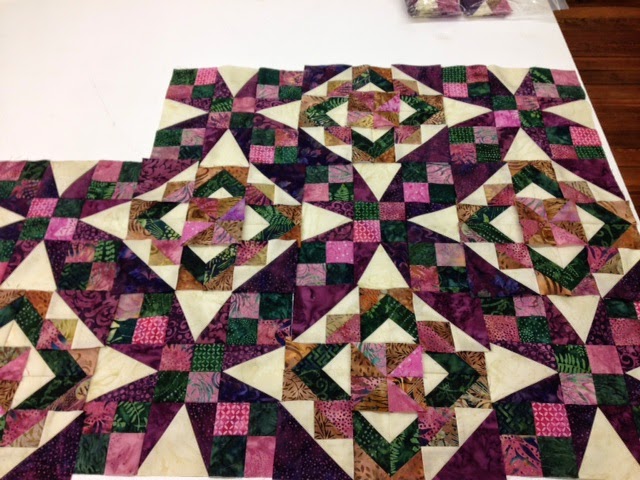 Three votes for option one, one for option two (the original layout).  I'm still torn...I really don't like the lack of contrast in the center of the stars in the first option so I am leaning toward option two.  I suppose I still time - I still have 150 chevrons to make before I need to make a decision.  I know what I am working on at the next retreat!
Posted by Dana at 6:39 AM 2 comments:

May was a crazy month - four trips in four weeks!  I am looking forward to a much more quiet June. All of the travel and work has definitely limited my sewing and hooking time!  The girls are home for the summer now, too, so cooking and general chaos has also been cutting into my "me" time....

I did manage to make a quick stop in Harriet Hargrave's quilt shop when I was in Denver. It was a nice shop with good variety. She had a nice selection of Japanese and Australian magazines and patterns - I resisted the urge to bring any home, but they were tempting! 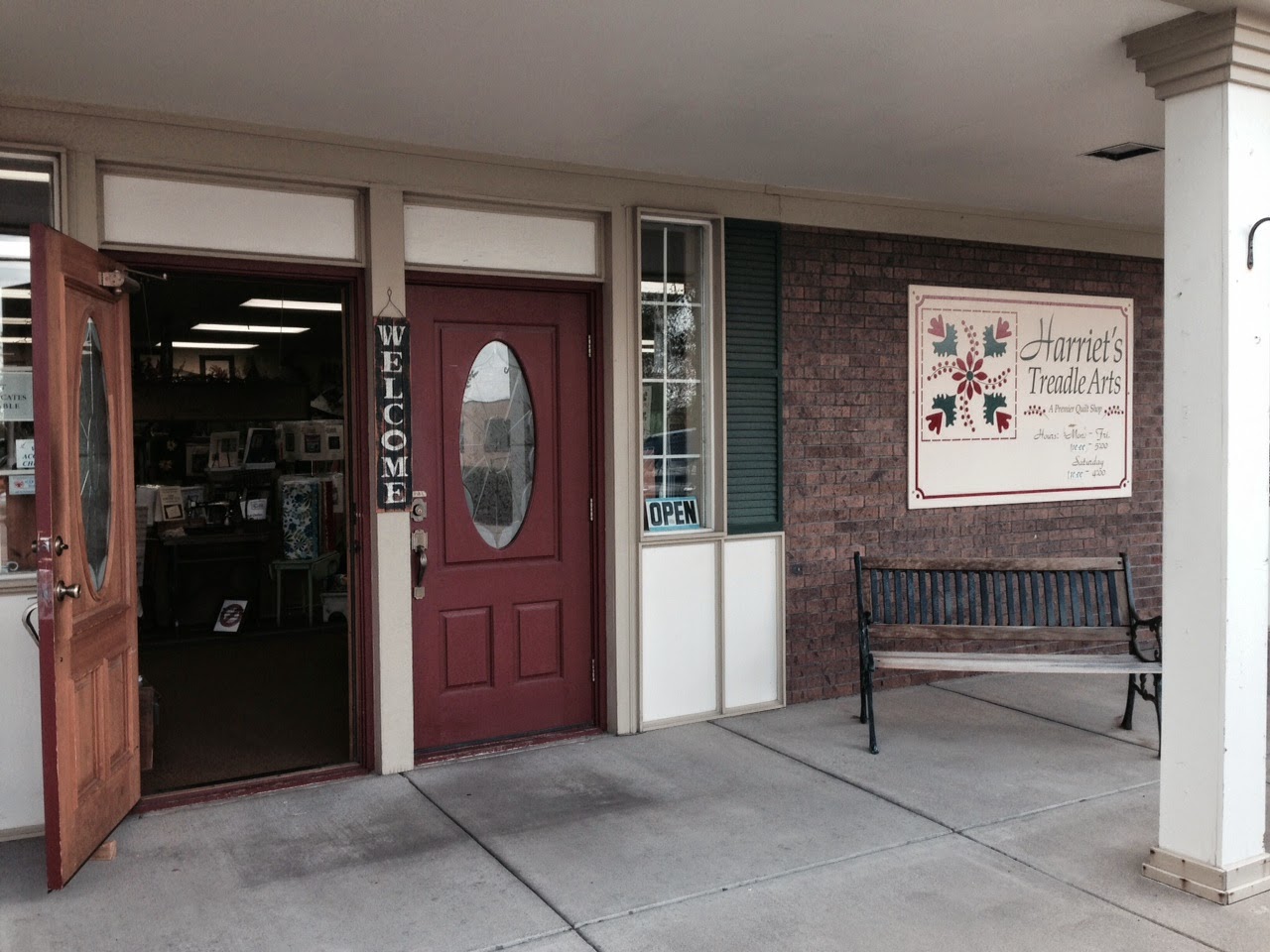 I had hoped to get to another shop while visiting Denver but between the insane traffic and crazy weather (daily hail and tornadoes) I decided the best place for my rental car was the hotel garage. I use the term "car" loosely - Avis couldn't come up with anything smaller than an Expedition for me....the perfect car for attending an environmental sustainability conference in a city with horrible traffic, right?!?

I have been making progress on a couple of projects. I decided to stop waiting for a retreat (I need one!!) to get back to working on my Orion's Star blocks from a couple of summers ago.  I have half of the quilt assembled and all of the strips put together for the other half.  Ann is absolutely in love with this one and is pushing me to finish it so she can have it for her room. 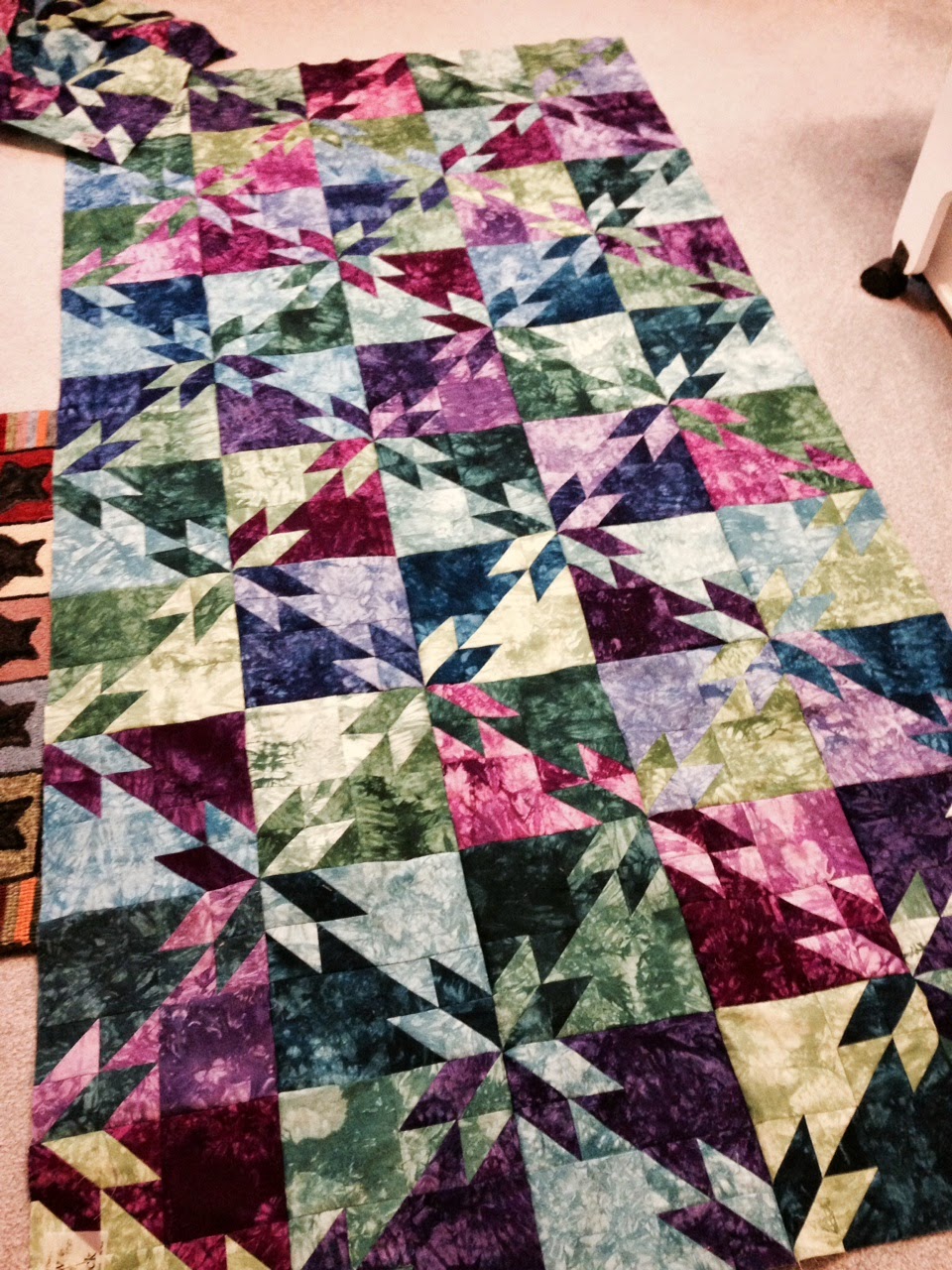 I've also made a little progress on my rug from Anita's class last winter.  I actually have more completed now than when I took this picture (I had high hopes of finding time to update the blog last week). 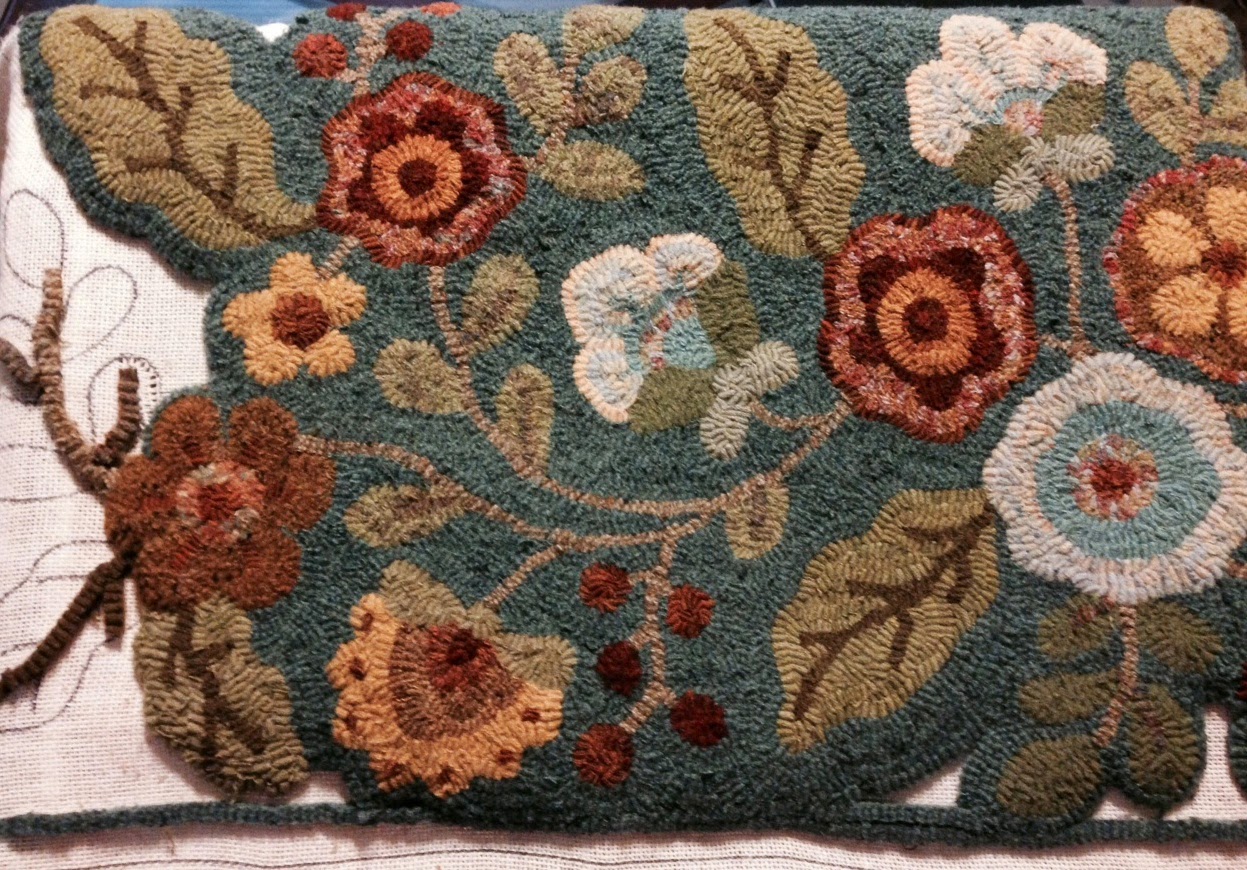 I have hooked the leaves on the left and am close to having the background filled in...then I can move to the other half of the rug not shown in the picture.... Did I mention that I need a retreat?

I had to break away from Orion's Star (much to my daughter's dismay) to work on a new BOM for our quilt guild this past weekend. We will be launching the BOM at our next guild meeting and I needed to get my sample completed. The pattern is an old Kansas City Star series designed by Eveline Folind. I did this one in Japanese taupes and hope to put together a second one in wool. Our guild president has done a version in William Morris fabrics and is working on a blue-work version....we are hoping to inspire lots of members to play along. 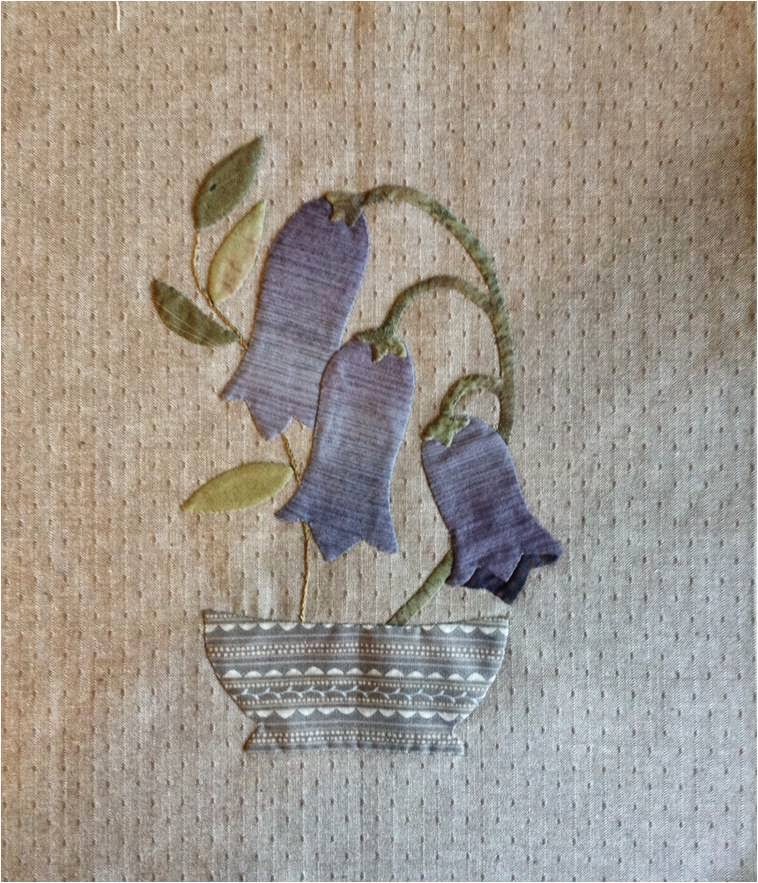 I am considering outlining the applique with embroidery a la Suzanne Marshall since I have always wanted to do that on a quilt, but I will focus on getting the wool version finished first.  Of course, that means I will have to resist the temptation to start my summer BOW when it arrives...first one should be here this week and I can't wait!
Posted by Dana at 5:24 AM 2 comments: