I'm starting to think that my brilliant idea to move my sewing room was overly ambitious.  I will share before and after pictures eventually to illustrate how truly insane the idea was, but at this point the new sewing room is definitely not in any condition to memorialize on the internet! I still have a very long way to go and have to admit that the sheer volume of stuff is intimidating. There will be a LOT of stuff in the guild yard sale this year!

I did manage to get some sewing done over the past couple of weeks. I have been plugging away at the Allietare mystery and now have 15 of the star blocks completed and one of the alternate blocks completed. I'm not sure if I really like my colors together but it is probably too soon to tell without more of the Pisa blocks.  I still have a bunch more "Santa hats" to make before I can make any more. I absolutely love the pattern and can't bear the thought of having to remake the pieces with the gray in them, but if I get a few more together and still don't like the colors I may consider it.  This pattern is too gorgeous to screw up with bad color choices! 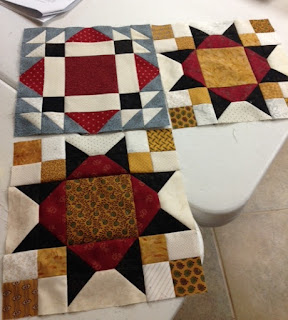 I decided to take a break from the mystery quilt and dig out an old UFO to work on. My bee did an exchange of blue and white nine patches back in 2008 in order to make disappearing nine patch quilts.We exchanged enough blocks to make a lap quilt and most everyone else finished theirs. Not me....I decided that I wanted to make a queen-sized quilt and made a bunch of additional blocks. I thought that I made enough and just needed to cut them up and assemble them. And that's where the project sat for years. When I pulled it out to work on over the weekend I found that I needed about 40 additional nine patches to get the size I want. So I started sewing.... 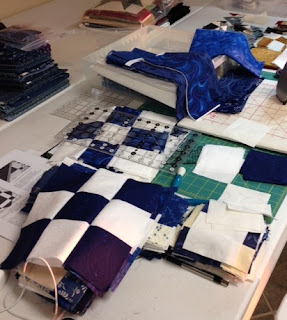 I still have more to make, but at least I made a dent in the deficit. I couldn't resist assembling a couple of blocks to see what the quilt will look like. 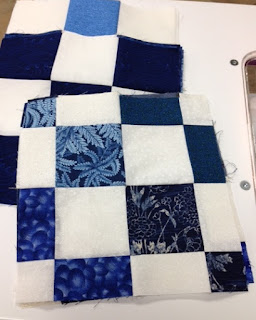 This is a very simple quilt but I can already tell that I will love it!  I used my Jackman's coupon to pick up the perfect blue backing for the quilt over the weekend. Now I just need to forge a path to my sewing machine so that I am able to use it again soon!