I've had a wonderful week at the AQS Show in Paducah!  I arrived Tuesday and have shopped until I nearly dropped every day.  As usual, I have acquired more projects than I could possibly complete before next year's show even if I was able to sew all day for the next 9 months.  What's really interesting is the diversity in my purchases.  My bags are full of reproduction fabrics and batiks...quite a strange assortment.

The new pavillion (fondly referred to as "the marshmallow" by Libby Lehman and the AQS folks) was a wonderful addition to the show.  It was a little warm by mid-day, but nothing like the pool area used to be.  It was well-lit and set up quite nicely - very impressive! 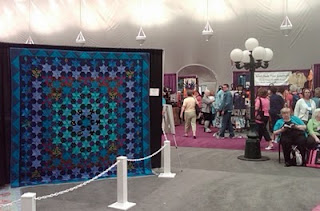 Amidon Quiltworks was here for the first time this year.  I've only seen them in Chicago in the past.  Another wonderful first-timer is Sew Unique Creations (Tara Darr).  She has such wonderful patterns!  I really enjoyed visiting her booth.  I picked up a couple of patterns and quite a bit of fabric there.  Other notable purchases include two complete queen-sized kits - one from Quilts by the Bay (the Judy Niemeyer wedding ring quilt) and another called "Dove in the Window" from Sew Batik).  I ended up with lots of odds and ends from other vendors including lots of patterns (mostly applique, of course).

I have one more class before I leave tomorrow - a color-planning class with Judy Niemeyer.  I have to keep my fingers crossed that I will win one of the patterns and planned quilts.  Afterwords I will meet up with friends for one last meal at Flamingo Row (the third time this week) and then head out of town.  It's always so sad to see the week come to an end!
Posted by Dana at 5:50 PM No comments:

I spent yesterday at the IQA Spring Festival in Chicago.  We made a marathon day of it, leaving here at 6 AM and returning around 11 PM.  It is a great show, particularly in the way of vendors.  Here's one of my absolute favorites - Primitive Gatherings.  I started the show and made my first purchase at their booth. 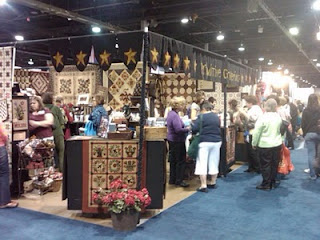 I was incredibly disappointed to hear that this was the last year for Chicago.  They are moving the show to Cincinnati.  It will be a week earlier next year, but it still doesn't really make sense to try to head all the way to Ohio right before the Paducah show. I also think that AQS is short-changing the Paducah show and that is has lost a bit of its former glory.  I think it's a shame that they are spreading themselves so thin and that they have had so much trouble at Paducah.  I hope we don't end up losing all of the really good shows in the midwest.
I am heading to Paducah on Tuesday.  I did manage to get a little bit of sewing done last week and plan on doing at least a little more while in Paducah, but I think it's safe to say that I will be coming up short on accomplishments again this month.  To make matters worse, I picked up at least a half dozen new projects yesterday.  And one is another BOM.  Oh no!!!
Posted by Dana at 7:23 PM No comments:

I am spending the week in La Jolla (near San Diego) on business.  I flew in yesterday.  It took nearly the entire day to get here, but thanks to the time difference, I had time to do a little exploring once I arrived.  The flight out here was quite interesting, too.  I'm not sure if we were flying lower than I am used to or the sky was just really clear, but I could really see the mountains as we flew into Salt Lake City.  I've never been to SLC (or Utah, for that matter).  According to one of my co-workers, though, I still can't say that I have been there.  He says you have to leave the airport in order for it to count.

I visited Rosie's Calico Cupboard yesterday.  What a wonderful shop!  They had an absolutely unbelievable amount of fabric.  There were walls of each color, and rooms of things like Civil War/Jo Morton.  Here's a pic of just one of the many fabric areas: 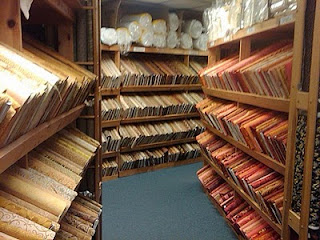 I did a little bit of applique on the flight out yesterday, and a little more last night.  I plan to do a bit more tonight.  I'm not making tons of progress, but every little bit counts!  I am working on My Garden Album block nine and Sue Spargo block one.  I find that the wool applique is a little more forgiving when dealing with turbulence.
I did get my April flowers hooked before leaving home but didn't get a chance to take a picture.  I also thought I had the perfect background, but after hooking some of it in, I think it kills the flowers.  I am disappointed that it won't work (I bought a yard of it!) and also bummed that I don't have a solution yet.
I saw a pattern that I loved at Wool Club this weekend - Bea Brock's "Birds and Berries".  Nola also demonstrated a couple of techniques that gave me a fun idea for the May project - the theme is "flowers".  Jennifer stopped by to show us the tiles that she is making for the June project - the owl that I had been resisting very successfully...that is, resisting until I saw the tiles.  They are so cool!  I purchased the pattern and need to figure out what colors I want to use.  So sadly I am back to rapidly acquiring new projects, and I haven't even been to Chicago or Paducah yet!
I have so much to talk about - I didn't even mention the Ricky Tims' Homecoming Concert we attended last Friday.  It was very fun.  He is extremely talented and very entertaining.
Well, it's after midnight at home, and probably time to get moving here in California if I plan to get any sewing done before bedtime.  I'll close with a couple of pictures I took after work this evening. 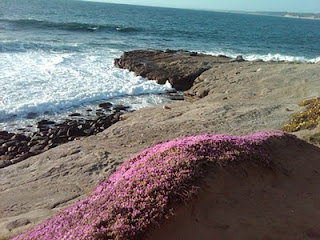 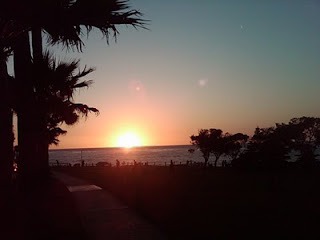 I was one day late on this one - Block 9 came in the mail yesterday.  I'm just happy to have it finished!  I guess I really can't count Block 9 as a "bonus" this month now that I have it in hand.  Hopefully I can find some time to prep it while I'm working on Easter dinner tomorrow. 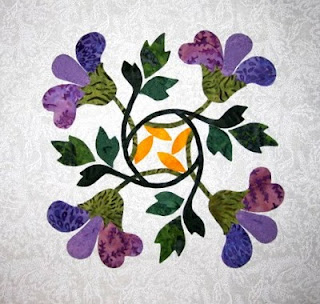 I know better than to be too ambitious with my list this month.  I will be out of town for two full weeks and won't be able to get much done on any of my upcoming trips.  I am going into this month with a very positive attitude... I am absolutely positive that I will end the month significantly behind where I started!  I am headed to the IQA show in Chicago (Primitive Gatherings, here I come!) immediately followed by a week in Paducah.  What's really sad is that I have found a few other things to purchase online over the past few days so I  started my traditional month of crazy, impulsive shopping a bit early this year!

I won't commit to anything more.  If block 9 of My Garden Album arrives before the end of the month, I will try to get it started.  My Applique Affair assignment for this month is block 5, which I am pretty sure I already have completed, so I get a break there.  If block 20 arrives I may try to get it prepped so I can eventually play "catch up" for last month.  Any progress on these falls into the "bonus" category.