I'm double-dipping with this post - posting both a slightly belated Friday Night Sew-In update as well as a progress report for the Elm Street Quilts One Monthly Goal (OMG) link-up. I hope to have time to catch up on everyone's posts later today - it looks like a lot of fols were really busy this month!

I started the weekend with just one week's star blocks left to finish - or so I thought!  I checked the finishing instructions and found that there were two more star blocks still to do - a total of 50 in the quilt. 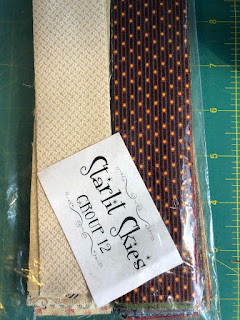 So as I have been doing all month, I got to work piecing the little center stars and then sewing the strip sets for the nine patches. I decided to mix the strips for the extra two blocks in with week 12 so I wouldn't have any duplicate fabrics. By Saturday afternoon I had finished the last of the blocks. Twenty-two blocks completed in March.  Not bad! 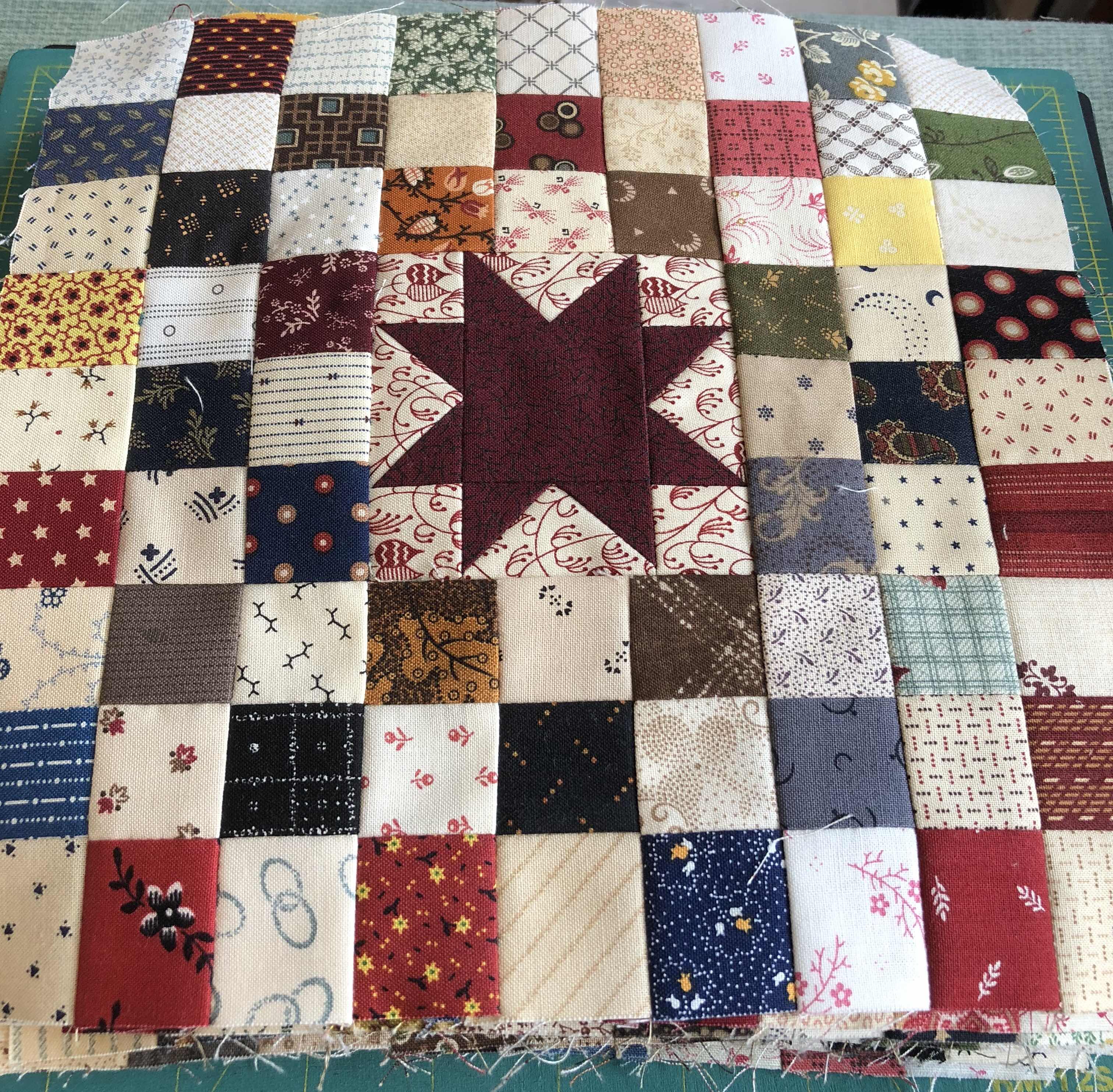 I was so excited to dive into the finishing kit, already starting to ponder how I will quilt this top, when I read the next step. I need to make 72 more little stars for cornerstones.  That's a LOT of stars! So I had to get out my trusty wire rack and start starching fabric again. It's going to take a while to get all of those squares starched, but I managed to get enough ready to sew my first 8.  Just 64 more to make! 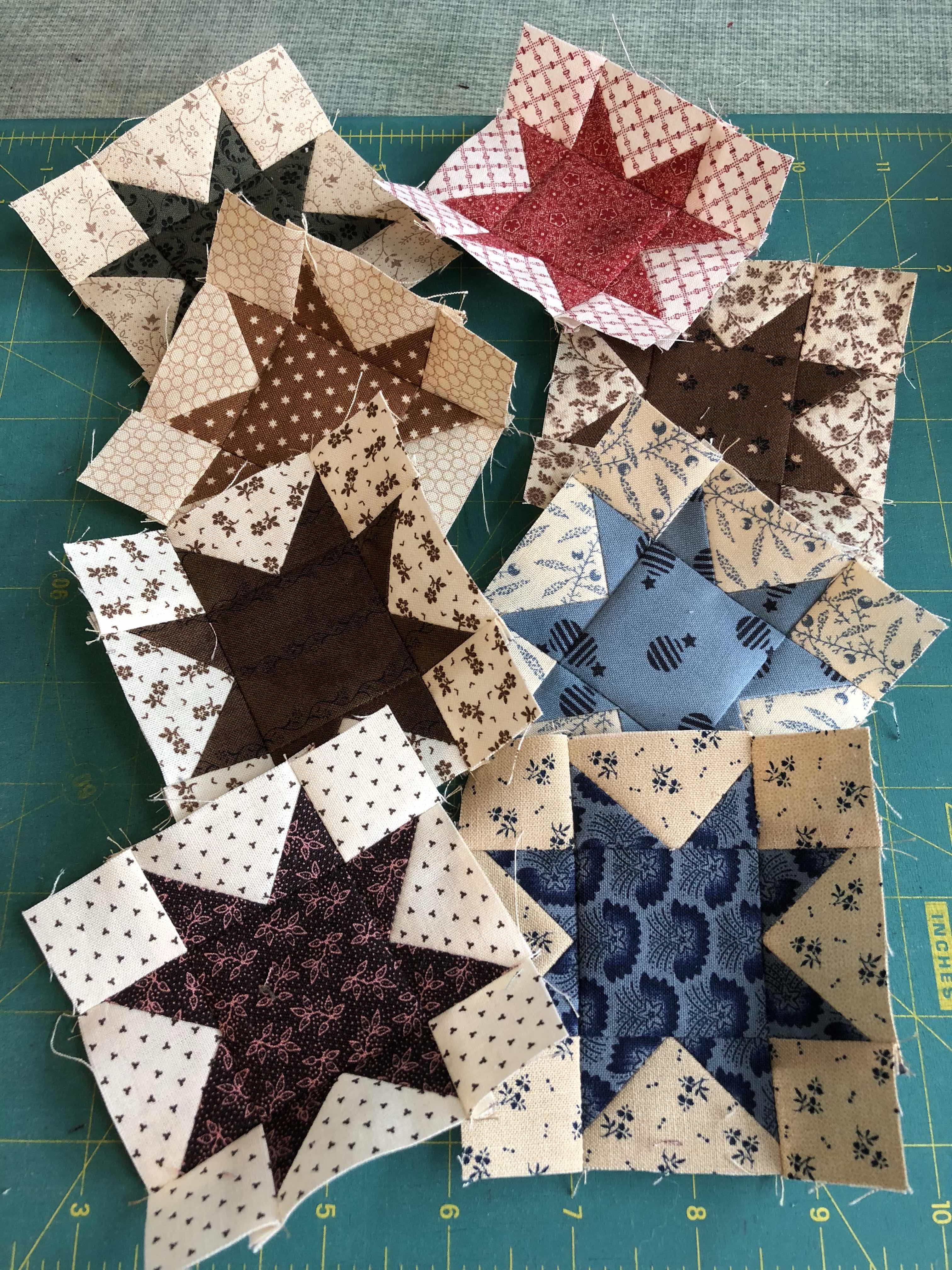 I took a little break from sewing binding last night to work on one of my little baskets.  I'm not sure how many years ago I started this project, but I know that I was working on it when I traveled to Australia in 2010, so it has been a while!  I am not sure where I put all my finished blocks and the rest of the fabrics, and don't even remember how many blocks I have finished, but I still love this quilt and would like to get back to it. I think I might even replace one of my other UFOs on my list with this one - is that cheating? 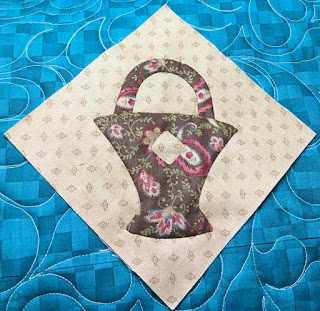 I need to give some thought to my April OMG project.  Do I stick with Starlite Skies?  I feel like I'm on a roll. Or give myself a break and move on to something else? I will have to see how I am feeling about little stars by the end of the week...
Posted by Dana at 8:26 AM 5 comments:

Now that I have On Ringo Lake out of the sewing room, I decided it was finally time to start something new.  Alabama Star has been at the top of my list for quite some time and I finally settled on a background so I jumped in with the first of the "octagon" blocks. 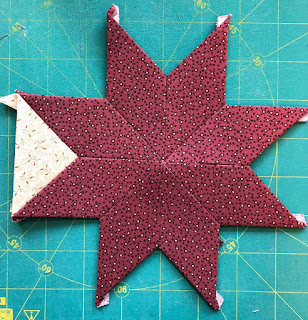 I was just not happy with how the center went together with the paper pieces.  I know that I should probably get the rest of the side triangles on and take the papers out of the center before I decide, but having hand pieced a queen-sized LeMoyne Star previously I feel like getting that center right with all those papers in there will be a gigantic pain.  I think hand piecing might be the better solution. I decided to stop where I was and bite the bullet and order the stamps from the Netherlands. It hurts to pay $25 in shipping, but I think I will be happier in the long run. Now I just have to wait for them to make that long trip across the pond!

So with that project put on hold, I decided to start on the 2018 TQS BOM.  I finished the January blocks (3 each of 3 patterns) so now I am only one month behind.  I hope to be caught up by the end of March. 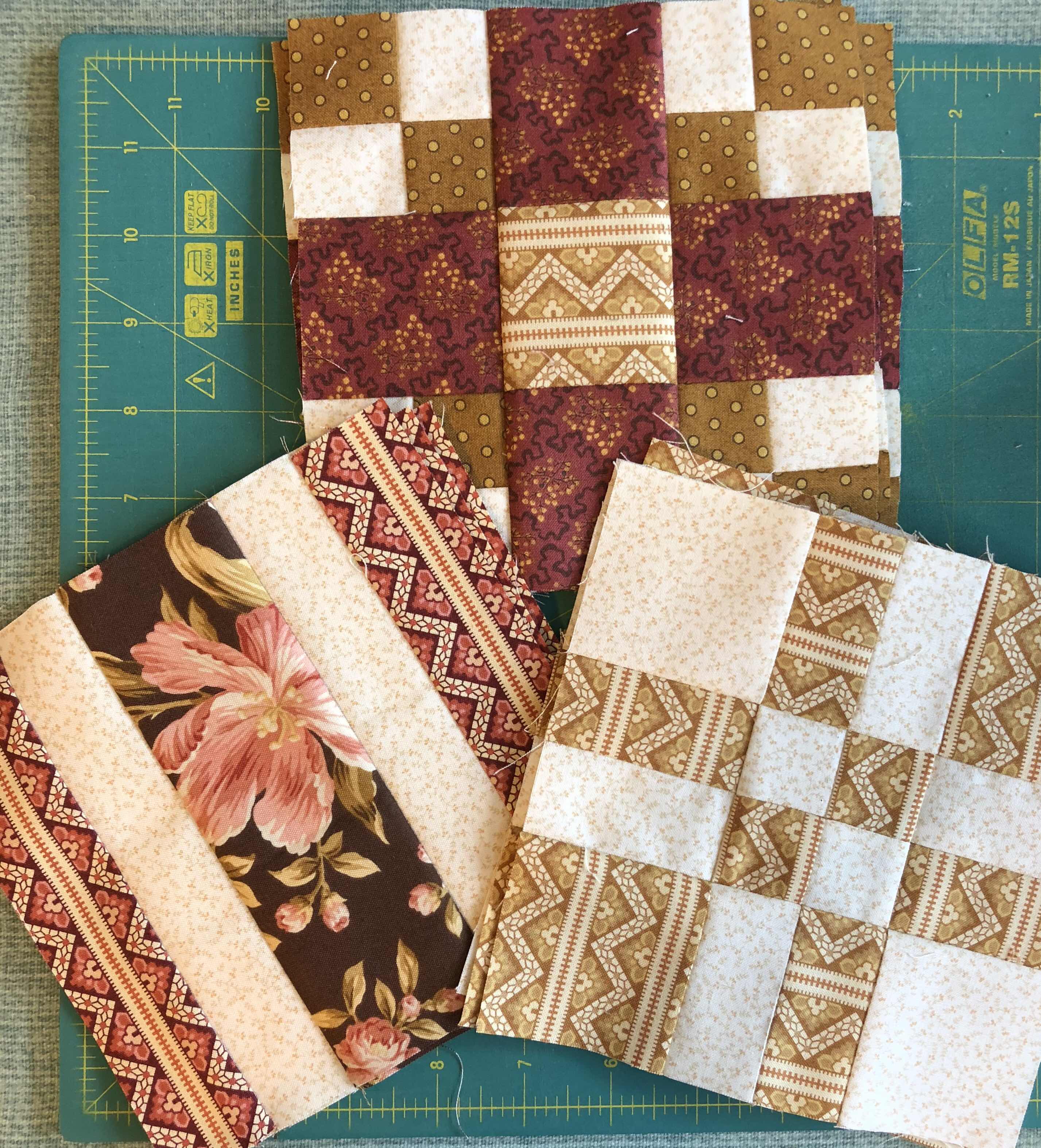 I had to decide what to choose for my One Monthly Goal project for March. I could have chosen one of the UFOs selected for this month, but neither of those was really calling to me. I should have chosen Triangle Gatherings to get all of those blocks and pieces off my sewing table, but I am still trying to decide how I want to set that one. I decided to go with the project I was most excited to get back to: Starlite Skies.  I have the first seven weeks' blocks completed: 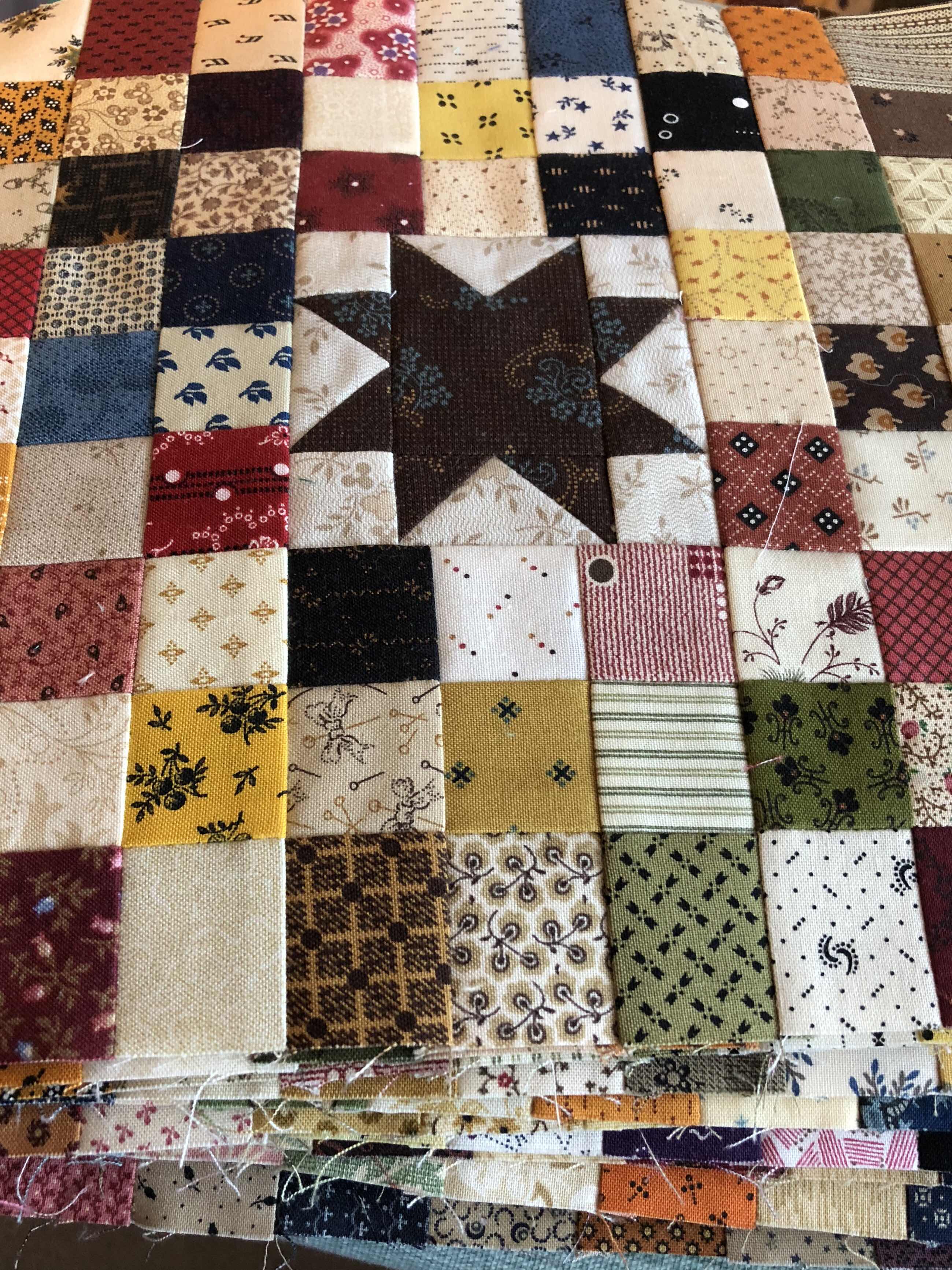 And started the weekend with five left to go: 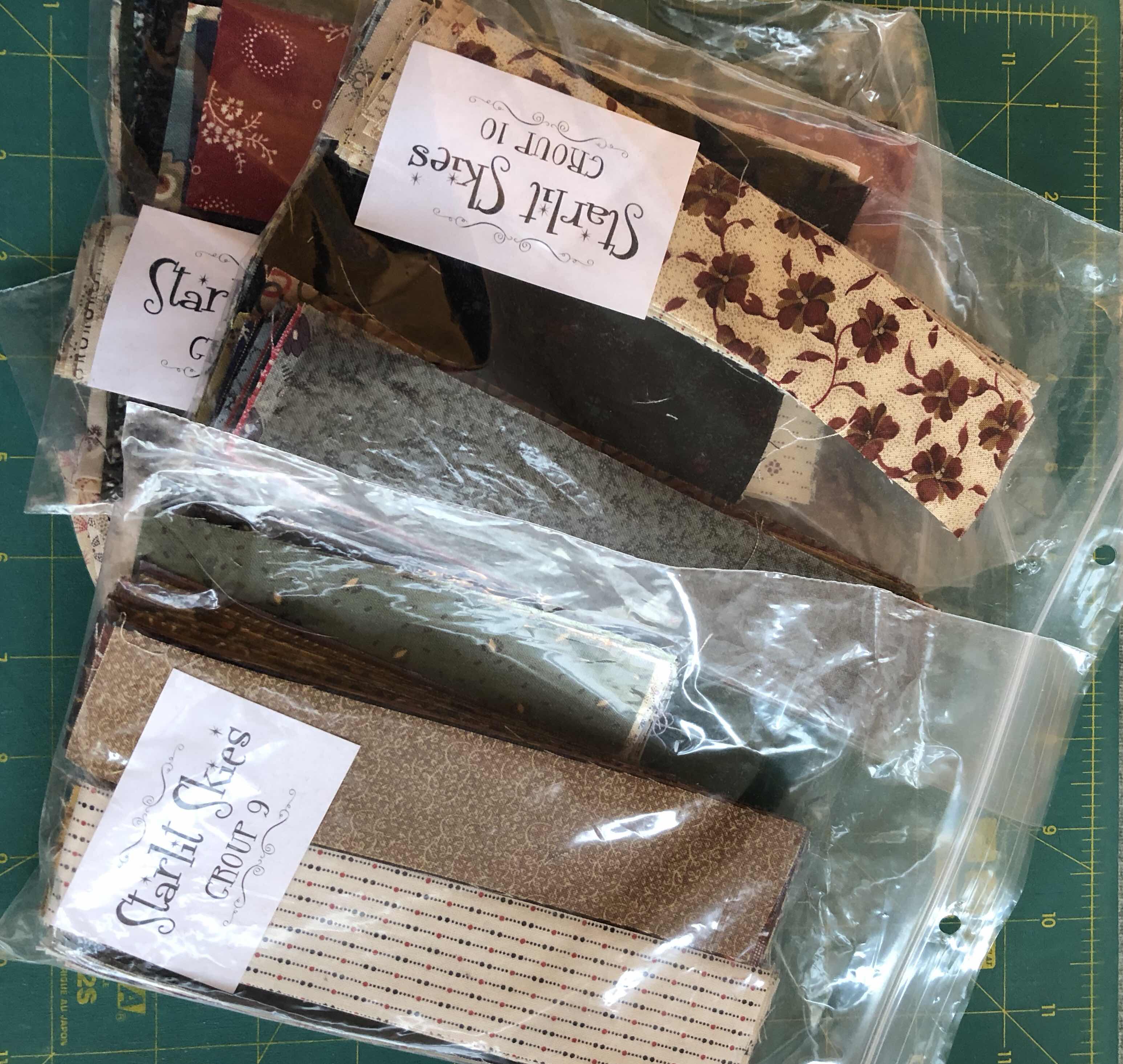 I was able to get week #8 to this point - just need to sew the big nine patches now. 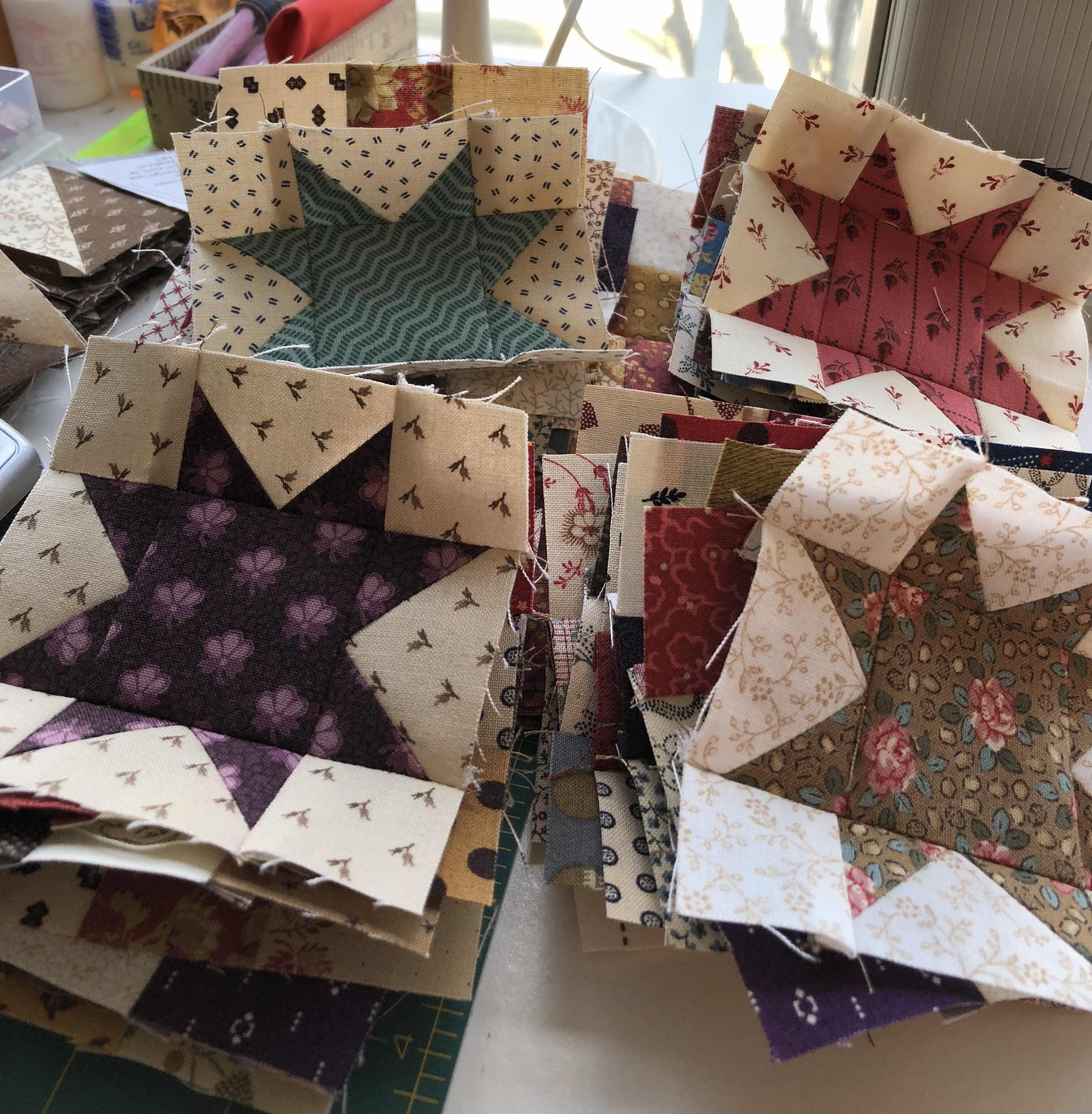 I'm not sure how far I can reasonably expect to get in a month, but my goal is to at least have all of the blocks pieced. I looked at the finishing kit yesterday to remind myself what was involved and was so excited (yes, that's sarcasm) to see that all the cornerstones are stars....so I have MANY more stars to make before this one becomes a top.

Linking up with Elm Street Quilts One Monthly Goal (OMG) March link-up - hoping to be three for three by month's end!
Posted by Dana at 7:09 AM 5 comments: