I was able to get a fair amount accomplished this weekend in spite of being severely handicapped by an overly ambitious workout on Thursday night. I really had no idea muscles could be that sore...I could barely make it up and down my stairs!

My weekend project was week two of the Among Friends SBOW.  I decided to try it old school this time with no triangle papers. I finished 15 of the 44 blocks and prepped 8 more. 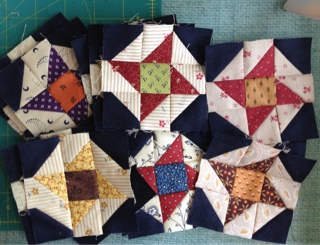 I checked each of my HSTs with a 1.5" square ruler and trimmed here and there as needed but found that they are coming out pretty accurate and are going together easily.  So far much more enjoyable than dealing with paper. 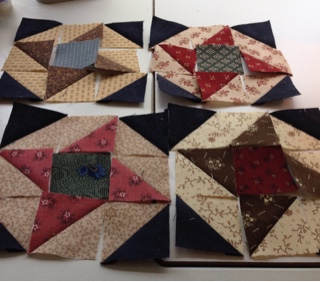 I haven't tried sewing them into the larger block yet but I am ironing the seams one direction this time so that I am able to nest them when I put them together.  I am hoping that makes for a much more accurate and less frustrating assembly process.

I took a break from the tiny HSTs to try out a few hourglass blocks.  I was planning to avoid the temptation to start Bonnie Hunter's new leader and ender challenge since I haven't made much progress on last year's, but where's the fun in that? 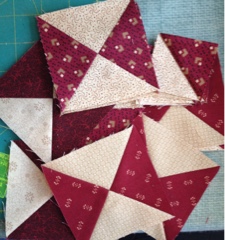 These were a lot of fun. They go together quickly and seem huge (3.5" unfinished) compared to the other things I have been working on.  I have no idea what setting I will use for these but I am thinking that it would be a good way to use the stack of red and cream fat quarters I have had sitting on a shelf in my sewing room for years.  I remember collecting the stack on a trip to the lake - perhaps a shop hop - that included Homestead Hearth. I recall having a plan for them at the time but have long since lost the plot on that one. I really like them and am anxious to make more!

I figured if I was going to start a new leader and ender challenge then I needed to try to make some progress on the old one.  I finished off a couple more rows and added them to the five I already had together. Seven down, forty to go! 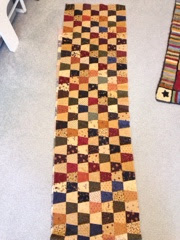 I'm just not very disciplined at using them as leaders and enders.  I tend to use whatever project I am working on as my L&Es instead (starting the next block when finishing the last seam on another, etc.).  What is really amazing is how many times I manage to end up with the same fabrics lined up together. I even have places where there are three of the same blocks lined up. Oh well, I'm still counting on no one really noticing once all 2000+ tumblers are put together!
Posted by Dana at 5:49 AM 3 comments:

It seems like I have spent quite a bit of time sewing over the past couple of weeks but I don't have very much to show for it! I am overwhelmed with projects right now and love every one of them so much that I can't make myself focus on just one!  I always go a little overboard during SBOW season but this year I have completely lost my mind.

I haven't really done much with the wool SBOW. I've prepped a few blocks but I plan to change out many of the applique motifs and so I need to draw patterns and pull wools that will work for them so that one is on the back burner for now. I have prepped the first four freebie blocks and have stitched the first two: 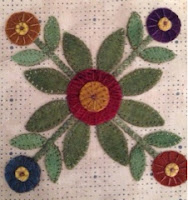 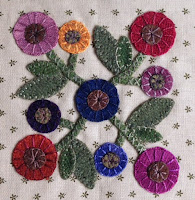 I am enjoying stitching all of the pennies and have been working with my already vast collection of threads rather than ordering the recommended colors and am finding I can match them pretty well.

I was able to attend one day of a local retreat and started prepping Clara's Stars.  I was able to get all of my background yardage cut into 5" squares and to start playing with the week one fabrics.  I have always thread-basted my English paper piecing but decided I needed to go with a quick prep method if I was ever going to get any of these sewn, so I tried both starch and glue. I liked the starch method when I started with it but found that it was really easy to get the paper wet and then you had to be really careful not to lose the shape when you pressed the seam allowance. Not a bad way to go, though. But then I tired the glue method and I was completely hooked! I am not a fan of working with glue but it goes so quickly and holds so well!  I might regret it when it comes time to remove the papers but it sure speeds up the prep process!  I haven't gotten very far but have a few stars sewn and completed one triangle. 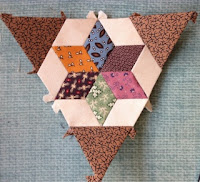 I find EPP very addictive - it is hard to resist working on this project!  But then there is the album quilt - we started the third block for that one and we have a deadline - or perhaps target is a better word. We decided to knock out one of the basket blocks next as there are several in the quilt. I have made a fairly strong start on my block (note that quite a bit of the pieces below are only basted but most of the basket is finished. I am tweaking the pattern a bit, skipping the big knife that is supposed to be next to the pineapple and replacing the mystery item that was next to the pineapple with a pear (it looks somewhat like an apple in the original quilt, but looks like a part of the male anatomy in the drawn pattern).  I also did my basket in brown rather than the traditional Baltimore album red. 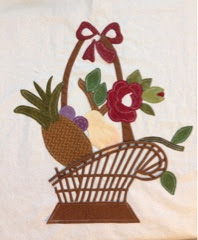 Looking at this picture I think my pear is too pale...perhaps I should switch to something a little more green. There's a lot of green in the pattern, though, so I really wanted to go more gold. I will have to give that one some thought.

Although I already have more than enough projects in the works, I am completely obsessed with all of the Panama Pyramids I am seeing posted on Facebook.  I am really trying not to be sucked in - to leave it at the one block - but they are so tempting!  And then I saw that Cindy Blackberg released a stamp for them.  I have been wanting to do a hand piecing project with stamps for a long time so I had to order them! 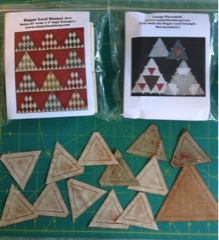 I stamped my first block - clearly I need a little practice!  What an awesome way to prep hand piecing, though!  There's a little more cutting involved since you can't get them right next to each other but I started sewing them last night and love the precision of the seam allowance and the strong sewing lines. They are great to work with!

Last, but definitely not least - I got a new toy for my birthday this year!  I have been looking at longarms for a very long time as I have always hated not being able to make my own quilts from start to finish.  I've tried quilting on a domestic machine but I usually make large quilts and clearly don't have the talent to make it work. I spent quite a bit of time noodling over which one to go with and finally landed on a Gammill. The thing is HUGE!  It occupies a big part of the basement just outside my office. 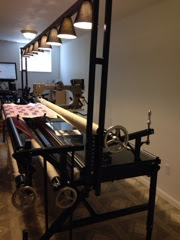 I have a very long way to go in learning how to use this beast but am just about ready to put a "real" quilt on it.  Luckily I never got around to mailing the last two I finished to Missouri Star.  I'm very excited about doing them myself!

Oh - I almost forgot!  This week is the Friday Night Sew In!  I have quite a few things lined up....perhaps even some machine work. Read more about FNSI and sign up to join in the fun on the Sugarlane Designs blog here.

I couldn't wait for the first SBOW shipment to arrive.  I was SO disappointed when I returned from New York and my package was not waiting for me. And then that weekend when nothing came. Then, on June 20, it arrived. 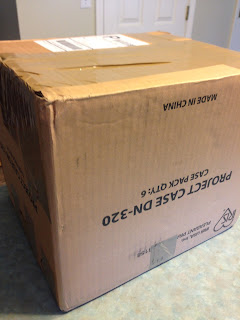 Even though I knew that the first shipment would contain the background fabrics for all of the projects I somehow didn't expect it to be this large!  It was full of all kinds of wonderful goodies. I was very excited! 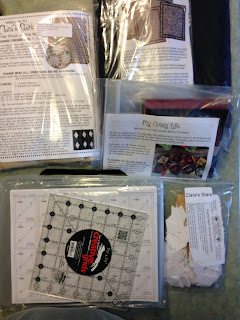 Fast forward to the following weekend, when I had already received week two in the mail and was feeling a little behind.  I never expected to keep up with all - or even any - of the projects but figured I would be able to make a respectable dent in at least a couple of them with a weekend of sewing.  I decided to start on Among Friends. Lisa Bonjean recommends starching fabrics - says it is critical - but I am not a fan.  I have previously seen her method of saturating the fabrics with starch and letting them dry and was curious, then saw an episode of The Quilt Show where a "precision piecer" also recommended prepping fabric that way.  I finally tried it with a couple of the 365 Challenge blocks. I saw absolutely no difference in accuracy and didn't feel that it helped in the piecing at all.  I therefore decided I would skip straight to the sewing.  After an entire weekend of sewing I had maybe one or two stars completed and a huge stack of paper-backed pieces to trim and press. Add in another weekend - a long holiday weekend - and I finally finished the first week's blocks. 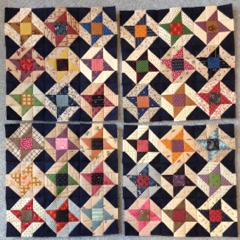 Sadly I can't say that I enjoyed it at all!  And there are 12 more weeks to go! I am not a fan of paper piecing (these use triangle paper) and felt that the blocks did not go together well. The instructions recommend pressing seams open and I had a lot of trouble with the intersections not lining up well. I had to rip and re-sew about half of them. I haven't started week two yet, but I am thinking old-school piecing (no paper) and seam allowances pressed in opposite directions. There has to be a better way!

I finished my second album block only one day behind our June 30 deadline. It was a fairly easy block although those ovals in the center wheel started getting old..some are not quite oval-shaped. I am okay with how it turned out, though, and have moved on to block three. 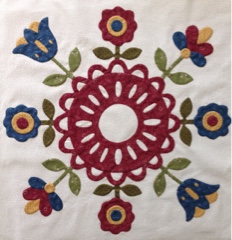 I didn't take a picture of my pathetic orange peel progress for June - only 18 completed after a very strong start.  The new total is 136. I am bound and determined to hit my target one of these months!

I need to decide what I will work on for the retreat this weekend.  I can only attend one day but want to make the most of it!
Posted by Dana at 5:01 AM 1 comment: