Last week we had the pleasure of having Irene Blanck come to town to do a workshop for our TAS group. I met Irene when I took her class in Houston last year and we discussed the possibility of her coming to the St. Louis area to teach when she returned to Houston this year. I was thrilled when everything fell into place to bring her here for a couple of days before she headed off to Quilt Market. 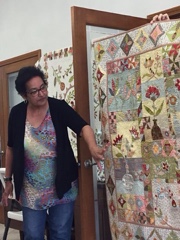 Our workshop project was Irene's Mosaics quilt from her book with Quiltmania.  It was a great choice for a class as we covered both applique and English paper piecing.  Irene's method for EPP is different from what I have always done and although I am still working to get used to it, I think it is a better technique for ensuring stitches don't show.

Here's a picture of Irene's quilt (part of it, anyway - we had to get creative go we could hang it over the TV mounted on the wall): 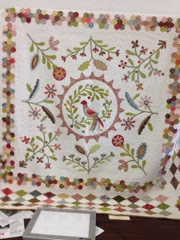 And here is my basted center sans dots (which will be added once the rest is stitched). Irene helped with the selection of fabrics for the bird.  He's pretty wild!  I did a little bit of stitching on the circle over the weekend but haven't gotten very far. 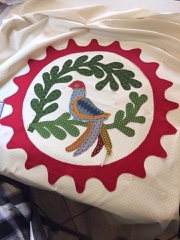 We tried to get pictures of everyone's centers.  I wasn't able to get up high enough to get a good angle but you can see the variety.  The dark backgrounds look really striking! 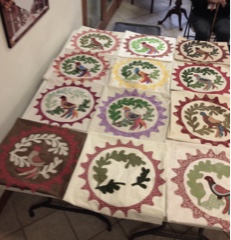 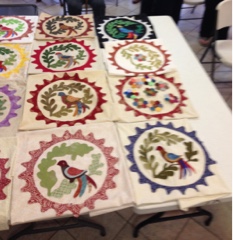 We are hoping to have Irene back to do another workshop when she is in St. Louis for Spring Market in 2017.  She is an excellent and very fun teacher!

The past few weeks have been a little crazy and I haven't had much time in the sewing room, but I have managed to get a few things done. I caught up on my guild BOM blocks, finished two each of the Magic of Christmas blocks 10-13 (I'm sort of caught up!), and last but definitely not least finally finished quilting this monster! 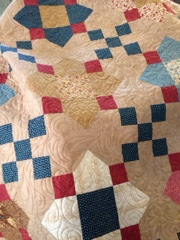 This was my first large quilt on the long arm. It was definitely the quilt from hell! After taking it off the frame to pull out almost a full row of quilting (which took many, many hours), I reloaded it and didn't get it lined up correctly so I ended up having to rip out more stitching. I finally was able to get everything lined up well enough and quilted down to the last section and found that my backing was not long enough. It was about 2" short. I was so tired of this quilt that my initial thought was to just trim all the borders down to match and be done with it, but after sleeping on it I decided to take it off the frame AGAIN and piece some backing from the site onto the bottom. I reloaded again and once again didn't get it lined up perfectly (I've since learned how to avoid that problem in a class I took at MQX Springfield last weekend) so I have a few places where the quilting overlaps.  I decided that I would just let it go...I was more than ready to be finished with this one!  So it is FAR from perfect but I never intended for it to be on a bed anyway.  It doesn't look half bad folded! I definitely learned a lot from it and am hoping my next one goes much better!
Posted by Dana at 5:42 AM 2 comments:

As usual I am behind in getting a September update posted. Life has been crazy busy lately!

A couple of weekends ago I attended a three day workshop with Maggie Bonanomi at Nola's studio in St. Louis. We did two days of rug hooking and one day of wool applique. It was really fun to hook again and the workshop gave me the hooking bug.  Maggie has some beautiful designs and I love her color palette!  Below is one of her rugs that I am absolutely in love with. She told us it was her first rug (note the "97"). The colors are beautiful and I love the squiggly line around the border! 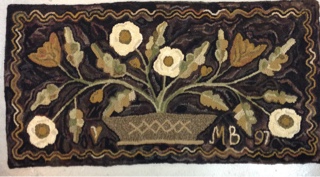 I hadn't done any hoking since the beginning of June and was reluctant to start yet another rug, let alone another huge one. I had purchased Maggie's cabin rug (I can never remember the actual name) last year while out at Janice's so I had to decide between starting another giant project and buying another pattern.  I decided to stick with what I already had and thus now have three ridiculously large rugs in progress. I am loving this rug so far! 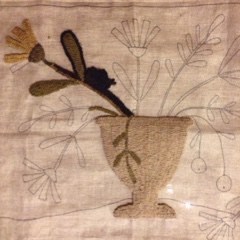 I actually have a little more completed than shown in these pictures.  I have a bit more of the greenery hooked and have started filling in the background.  I also have the cabin below completed. 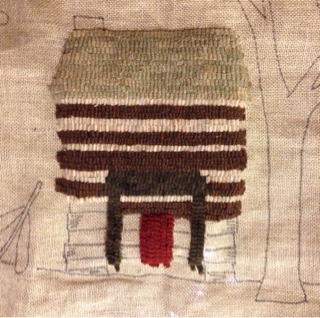 I will be attending Janice's Birthday Bash in November and plan to keep working on this one.  I need to get at least one of these big ones finished before I even think about starting another one!

I thought that September might be the month that I finally achieved my orange peel goal (one per day).  I was going strong the first half of the month but fell behind once I started traveling. I managed to do 20 in September, which when combined with the pathetic 7 I finished in August but never counted brings my grand total to 163. I had also hoped to catch up on my Magic of Christmas blocks last weekend but fell just a little short. I finished two each of blocks 6, 7 and 8 and one of block 9. By the time I had those done Lisa had published blocks 10 and 11.  I wouldn't be surprised to see more posted before the weekend so I will be spending a lot of time at my machine again this weekend. 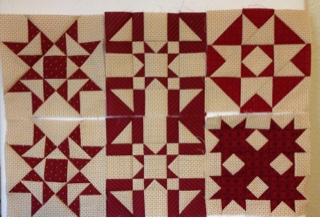 I have a busy rest of October - a business trip followed by some fun.  I will be attending the MQX show in Springfield next weekend and then will be hosting Irene Blanck for a two day workshop the following week. I am really looking forward to both (but not so much the trip to New Jersey)!
Posted by Dana at 5:57 AM 2 comments: