I finally finished my eagle block for my AQOMV project!  I was just a little behind - he was supposed to be finished in January.  I did manage to finish one of my signature blocks so I am ready for the February swap.  I haven't signed it yet... I really hate writing on blocks!  I am completely terrified of messing them up.  No matter what technique and pen I try, it never looks good to me. 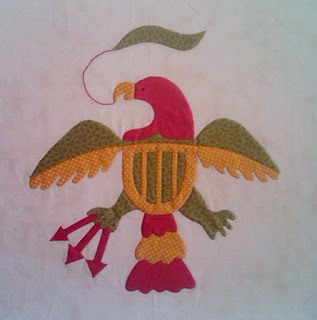 I need to prep another applique block for this project.  All of the signature blocks we are swapping will be pieced, so I plan to focus on applique first and then fill in with additional pieced blocks later.
Posted by Dana at 5:41 AM 3 comments:

I finally finished my bedspring!  It didn't turn out exactly as planned, but I am pretty happy with him.  Making a snowman seemed particularly appropriate this weekend given the surprise 5" of snow we received Saturday morning! 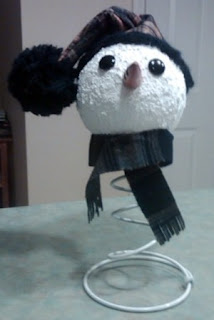 I learned a few things in the process of making my little snow guy.  First, you can't felt into styrofoam - it just doesn't stick!  Second, you can't cover styrofoam with wool and attempt to felt additional wool onto it.  Why it wouldn't work I don't know, but I totally destroyed my Clover felting tool (one broken needle and four bent ones)!  Third, Clover makes replacement needles for the felting tool - I had tossed it into the trash with the intention of buying a replacement, but found that you can get refills at JoAnn's for less than half the cost of the tool.  Luckily it was still near the top so it received a quick bath and is happily back to 'normal' now.
Last, but not least, I learned that they make a textured paint that looks like snow that does stick to styrofoam.  I was walking through JoAnn's with a bottle of glitter in hand when I spotted it.  I was thrilled - I absolutely HATE glitter!  The snow stuff went on easily with a brush and really turned out cute!
I was also really excited to find the button I used for the nose.  I can't remember what it is called, but it is perfect!  Now I just have to hope that all the hot glue holds until Wool Club!
Posted by Dana at 1:13 PM No comments:

I haven't been able to spare much time to work on any of my projects lately, but I did manage to get my journal cover finished and started filling it with ideas. 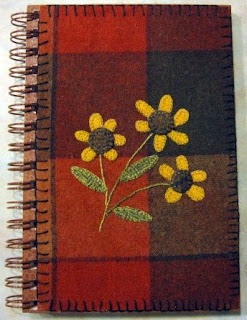 One of the project ideas I have added to my journal concerns the "Sincerely Jane" challenge that I am planning to start with other members of the Yahoo Rug Hookers group.  I really don't have time for yet another challenge, and already have way too many projects slated for 2011, but this one is really calling to me!  I pulled out the old pattern I drew 8 or 9 years ago and found that I don't really care for it all that much.  I designed a couple of alternatives with my Dear Jane (TM) software: 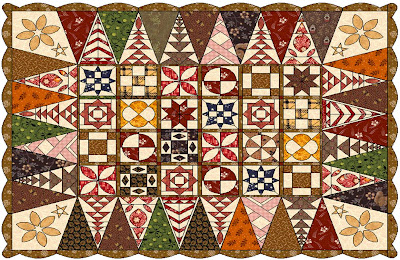 The blocks and triangles in the above layout are subject to change - I just threw things in to get the basic idea.  I had to make the center pretty large to balance the traingles on the border - the size is 39" x 49". 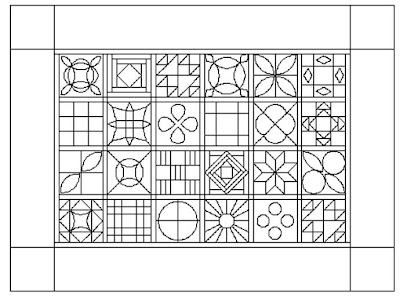 This one is similar to my original.  I am not sure that I like the plain borders.  It ends up being much more reasonable in size (29.5" x 39.5")﻿, but it doesn't speak to me like the first design. I think the triangles and kites really tie it to the original.  Now I just need to decide if I am up for starting yet another huge rug!
﻿
Posted by Dana at 8:48 AM No comments: