Shop Hopping & Trying to Keep Up

I had an opportunity to head down to the lake to participate in the Country Shop Hop at the end of last week.  I really enjoyed the trip.  The trees are beautiful and I really appreciate that the shops run tons of specials and sales to make the drive worthwhile.  Some shops had 20% off everything in the store.  I was disappointed in the free patterns - I think everyone just goes for the quick and easy things these days - but everything else was great.  I found lots of size 5 pearl cotton and since I have visions of doing a bunch of twilling, I had to pick up one of every color: 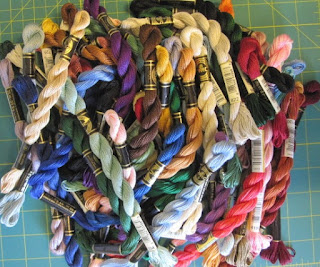 Note that this picture doesn't really convey the size of the pile - it's a couple (a few?) inches deep - I think I bought 70 skeins or so.  (They were on sale - how could I pass them up?)

Although not part of the shop hop, I visited Homestead Hearth on Saturday.  It's definitely my favorite shop of all time!  I found several fantastic Japanese taupes to add to my collection for my LeMoyne Star and also picked up Dawn Heese's new book.  I am planning to pick up wool to put together class samples before our next guild meeting, so I was happy to find the book without having to order it online.

I have been keeping up with Dear Jane the last couple of weeks (the blocks, anyway, not the triangle assinments).  I was at our guild's Quilt Club last night and was amazed by the renewed interest in Dear Jane.  We just may have to resurrect our group - it would certainly help keep me motivated! 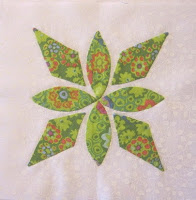 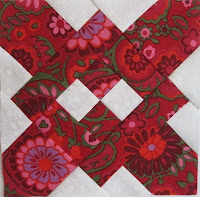 I'm also doing okay at keeping up with my hand piecing homework.  I have one of this month's 12" blocks done and the second well underway.  I am really enjoying the process and loving my colors. 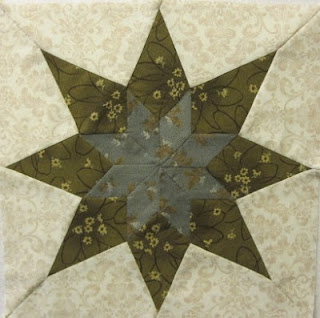 Switching gears to my other obsession....I'm starting to get excited about the Cardinals' game today.  We have tickets to the game tomorrow - I am so hoping that the weather cooperates and we get a couple of wins at home.  Go Cards!!!
Posted by Dana at 7:47 AM 1 comment:

I had planned to post about my class with Nancy Kerns, but I haven't touched that project since I've been home so that will need to wait for another day.  I had a very busy weekend with my oldest home from college but did manage to squeeze in some sewing time.

I'm making progress on my September hand-piecing class assignment - I may even get all three blocks completed before Saturday's class!  Here are the two 12" blocks for this month: 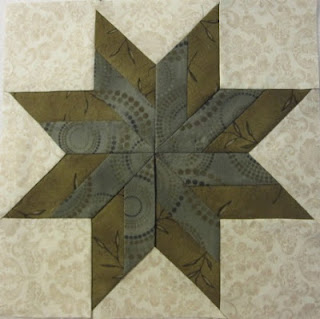 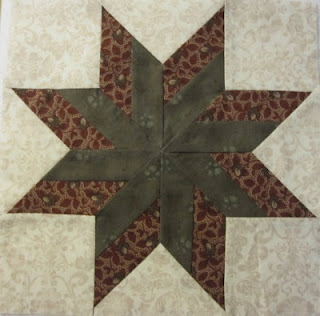 I also finished this month's "buck-a-block" from my guild.  I really like this pattern - it's a Kansas City Star pattern that was published in the 1950s.  I would love to win the blocks this month! 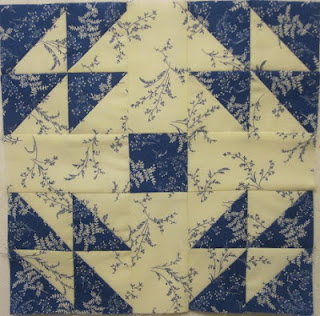 I also experimented with a cool technique for an old block that a friend told me about.  The pattern, "Arrowhead", was originally published in the Kansas City Star.  Anita Grossman Solomon came up with an innovative way to piece the block.  I tried the technique using some of the red and white fabrics I've been collecting: 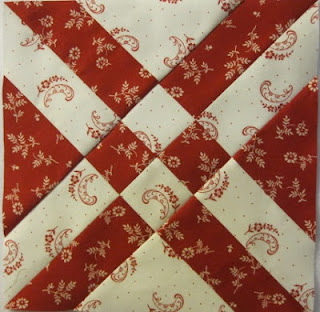 I love the technique and think this would make a fantastic two-color quilt, however I'm not sure I would use two prints.  This might be a good place to use that 6.5 yds of white-on-white I bought at Sweet Annie's a while back.

Last, but certainly not least, I made a new start on my rainbow Dear Jane.  I decided that I just couldn't stand the Moda Bella solid or the Kona Snow - they aren't nice to work with and they are very boring.  I found a nice leaf print white-on-white this weekend that isn't too "painty".  (I hate the paint - it always looks yellowish to me!).  I was able to snag 11 or so yards at a really good price this weekend so I am starting over (I only had five blocks in the Moda white, so not to much to re-do. 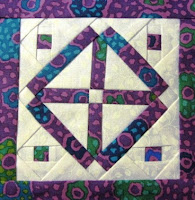 I'm a couple of weeks behind on the 2012 Dear Jane BOW assignments...and haven't made any triangles yet, but it's a start.  Yay!
Posted by Dana at 8:20 AM No comments: