More on the Baltimore

As I mentioned in my previous post, there were quite a few unusual techniques used in the Baltimore Album quilt we viewed at the IQSC.  A couple of them were included in this block: 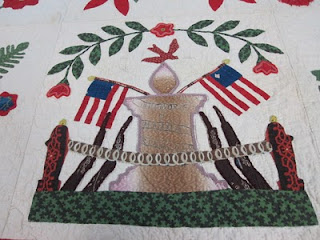 They are easier to see in the close-up below.  First, there is some sort of crocheted edge around the monument.  I believe it is emboidered directly on the quilt rather than couched, but it was difficult to tell.  The second thing we thought was interesting in this block was the piece of fabric with the spiral on it (I'm not sure exactly what to call it!).  It looked like the maker created this fabric herself, either by dyeing using a resist or bleaching in some manner.  I don't know too much about quilt history, but I don't think either technique was all that common in the mid-1800s. 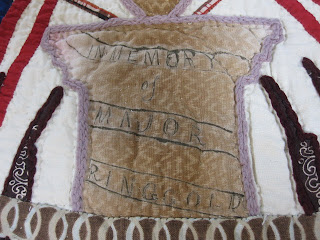 There were also several blocks with flowers that were created from a single stuffed piece of fabric with embroidery used to form petals.  Here's one: Notice also how the maker embroidered around the flowers and leaves.  Here's another example: 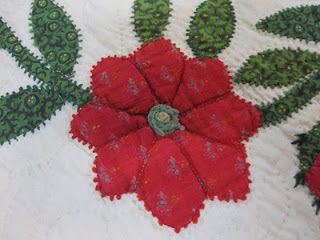 It was such a beautiful quilt!  I am looking forward to reproducing a couple of the blocks one of these days...
Posted by Dana at 4:44 AM No comments:

Baltimore on the Prairie

I just returned from a wonderful few days in Nebraska attending the Baltimore on the Prairie applique conference.  The adventure began with a trip to the International Quilt Study Center in Lincoln where we were treated to a close-up look at one of the Baltimore album quilts in the museum's collection. 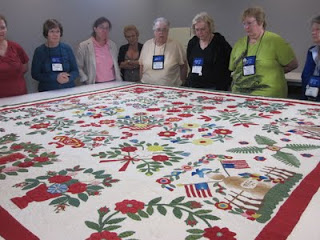 The curator told us that the quilt is believed to have been made for a Major Ringgold based on an inscription on one of the monuments in the quilt, and is dated 1847.  The quilt was obviously the work of several different people and includes several different names inked on various blocks. Apparently there is a large gap in provenance - very little is known about the quilt prior to the museum's acquisition.

There were some interesting and unusual tecniques used in some of the blocks.  A few were embroidered with very heavy threads, and there were some really unique dimensional flowers. Some were just simple but bold patterns - I particularly liked this block: 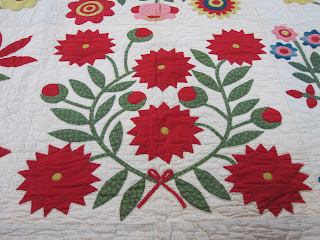 After our visit with the curator, we toured the museum's exhibits, which included some of the most interesting and intricate geometric designs I have ever seen!  There was one quilt that was a mosaic of a horse and rider that was composed of tiny squares - probably about 1/2" finished - and was nearly bed-sized!  I can't even imagine how the maker was able to get all of those pieces into their proper places! 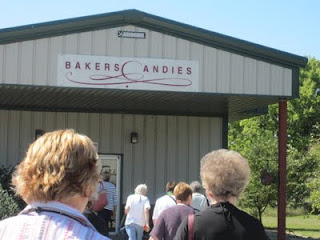 After we left the museum, we visited Baker's Candies, an outlet store full of tasty chocolate meltaways in lots of different flavors.  We filled up on free samples (yum!) and purchased plenty of chocolaty souvenirs.  The milk chocolate mints were my favorite...

We stopped at The Quilted Moose on our way back to the lodge.  I found quite a few really nice batik FQs that I had to add to my collection.  I was so excited about shopping that I forgot to get a picture!

One of my favorite things about the conference venue is the wildlife.  We saw deer a couple of times during the week, and enjoyed watching a steady stream of hummingbirds at the feeders throughout our visit. I really loved seeing the turkeys at the seed feeders - they make a mess and waste a lot of food, but they are fun to watch! 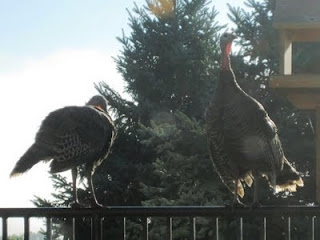 My teacher for the conference class was Rita Verroca.  She was fantastic!  I will post more detail about the class and my project later.  One of the interesting ideas Rita shared with us was to laminate paper patterns to create templates. The laminated patterns are great for tracing around, and we experimented with the iron and found that they would hold up to the starch method for those that like a prepped edge.

I was particularly imnpressed by Rita's demonstration of inking. I don't know that I would ever be able to work up the nerve to use a permanent marker on my finished applique, but I loved the effect: 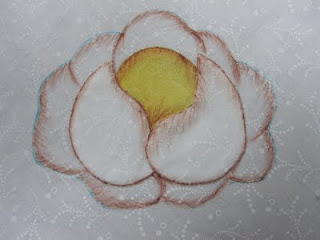 Hmmm...writing about Baker's makes me hungry for chocolate! I think it's time for a snack!
Posted by Dana at 9:01 AM 1 comment: