I made significant progress on my Floral No. 7 rug this month and am very happy with how it is shaping up.  I redrew the border, changing from the "targets" to vines and leaves, and finished hooking the center. I am mixing the colors from the center motifs in the leaves, going a little heavy on the light gray, mainly because I have more of that left over than any of the other wools. 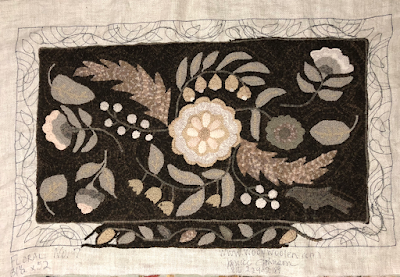 It's hard to tell how large this one is from the photo.  It isn't huge, but at 31.5"x 52" it is by no means tiny!  I am hoping I can finish it up in February.  I'm linking up with Elm Street Quilts' One Monthly Goal January Finishes, considering this month's box checked!
Posted by Dana at 6:27 AM 5 comments:

When my friend Heather posted about the 6 & 6 in 2018 link-up hosted by pomegranate and chintz and frayed at the edge I was immediately interested in joining in. I am definitely one of those people that can't commit to only working on UFOs or not starting something new until I complete something else. Where's the fun in that?!? It's been particularly problematic this year - I think the fact that I have barely left the house in three weeks due to the extreme cold has prompted more internet surfing and blog reading which has resulted in inspiration overload!

I chose 6 items from my UFO list for this link-up. I especially like the fact that we won't be assigned a month so this gives me a little freedom to pick up some of the projects I am most excited about when the assigned ones aren't doing it for me. I've posted pictures of all of those previously so for the purposes of this link-up I have just marked them with an asterisk on the sidebar and on my UFO page.

And then there is the "new project" list. I had to go back and read the fine print on the 6&6 post to be sure it didn't specify anywhere that we could ONLY start 6 new projects - I couldn't commit to that! Between the Primitive Gatherings SBOWs and the annual Bonnie Hunter mystery I would only have a couple of new starts left...or perhaps I can restrain myself from signing up for all the SBOWs this year? Anyway, my head is about to explode just trying to decide what new project I will start first.

One that will have to be on my list is the Jane Austen quilt. A few of my friends and I saw a version of this quilt being created by Jeanna Kimball at the 2017 Baltimore on the Prairie conference that inspired us to want to do this project as a group.  Here's a picture of the original from Linda Franz's site: 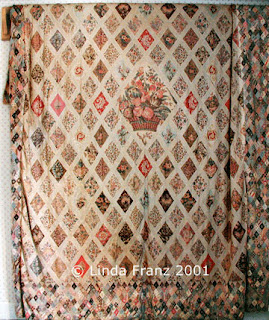 And then there is the "Alabama Star" quilt that I fell in love with when Barbara Brackman posted it on her blog back in 2016. 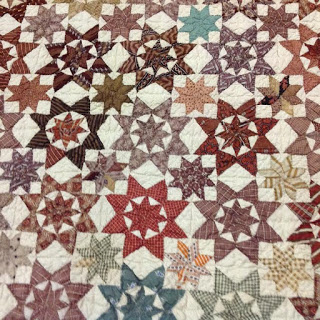 One of her followers designed stamps to use to hand piece this quilt but she is located in Europe so they are a little pricey, and I was thinking this might be better to do with EPP.  So I contacted Paper Pieces and now have a complete set of papers to get this quilt started. Now I just have to decide on what fabrics I want to use!

I recently came across this picture on Facebook and fell in love with the birds.  The pattern is "Feathers" from The Pattern Basket. The birds are all pieced - no applique. So cute! 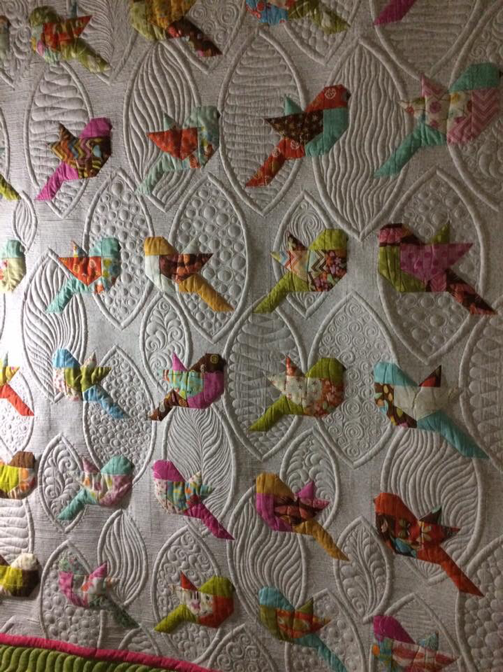 While running through all the recordings on the DVR in my sewing room over Christmas break I watched an old (2015) episode of Fons & Porter that featured a really nice log cabin variation made with a fat quarter bundle. I think this would be a great way to use one of the many fat quarter bundles I have collected over the years. 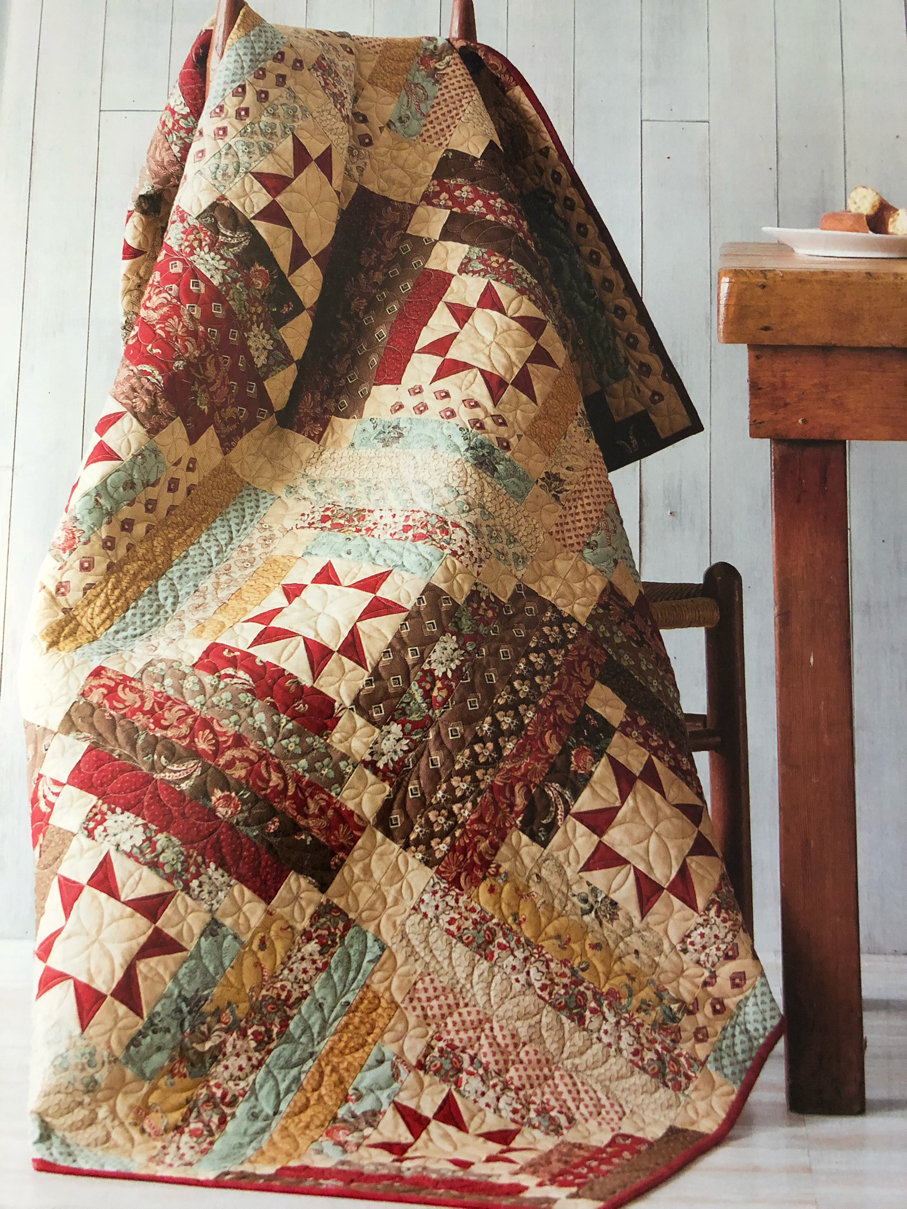 When I first saw The Quilt Show BOM for 2018 I wasn't really interested, even though it was designed by Edyta Sitar. But then I watched her on the BOM kick-off episode of the show and saw an email featuring the multi-colored version using her new Crystal Farm line, and I started to waiver. 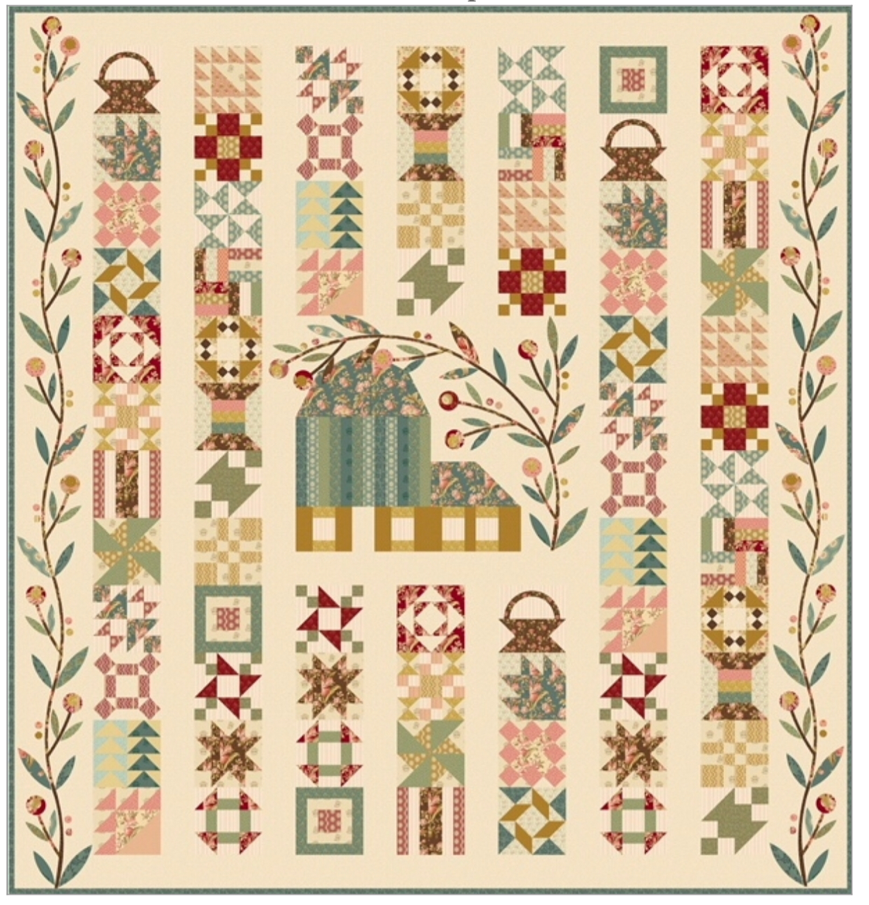 Which then led to an impulse order of a bunch of new fabric (which arrived in only two days)! 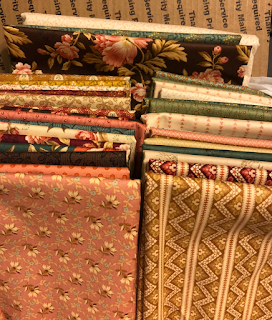 I am still undecided on this one.  The Crystal Farms fabric would look really great in the Alabama Star project too. I will have to give it a little more thought and try to narrow the field to just ONE new start to report on at the end of January!
Posted by Dana at 11:55 AM 6 comments:

While I am not nearly as far along as many other participants, I did finally manage to finish all of the half chevrons this weekend.  I nearly have all the pieces and parts assembled now.  I did end up having to add a couple of other fat quarters of tan into the mix due to all my cutting blunders early on. Hopefully I will come up with a project for all the mis-cut 2" tan squares somewhere down the line! 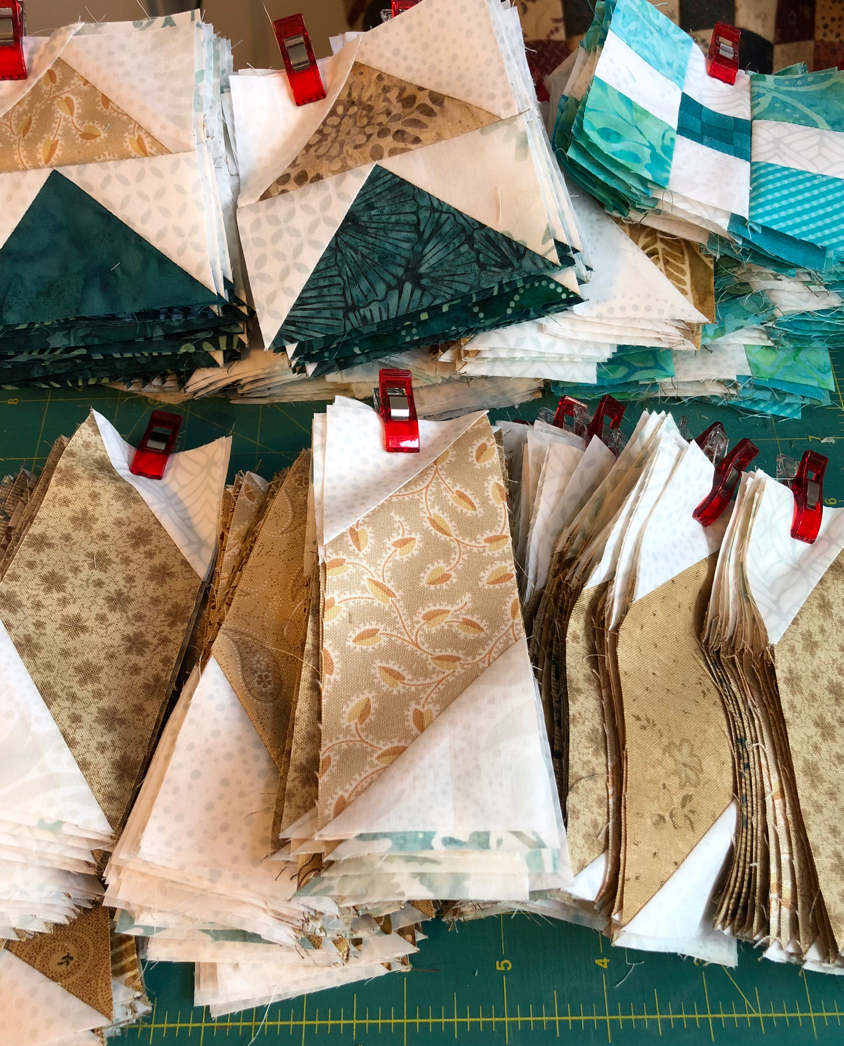 I was able to get a couple more blocks together so I could get a look at how it will all come together.  I made four blocks but realized I turned the corners the wrong way on one of them so it will have to be corrected.  It makes a really nice looking block that way too!  I had a lot of trouble getting the chevrons going the right direction just in this little bit I layed out so I now completely understand what people have been posting about it being really challenging to keep everything straight. I really love how the colors turned out. 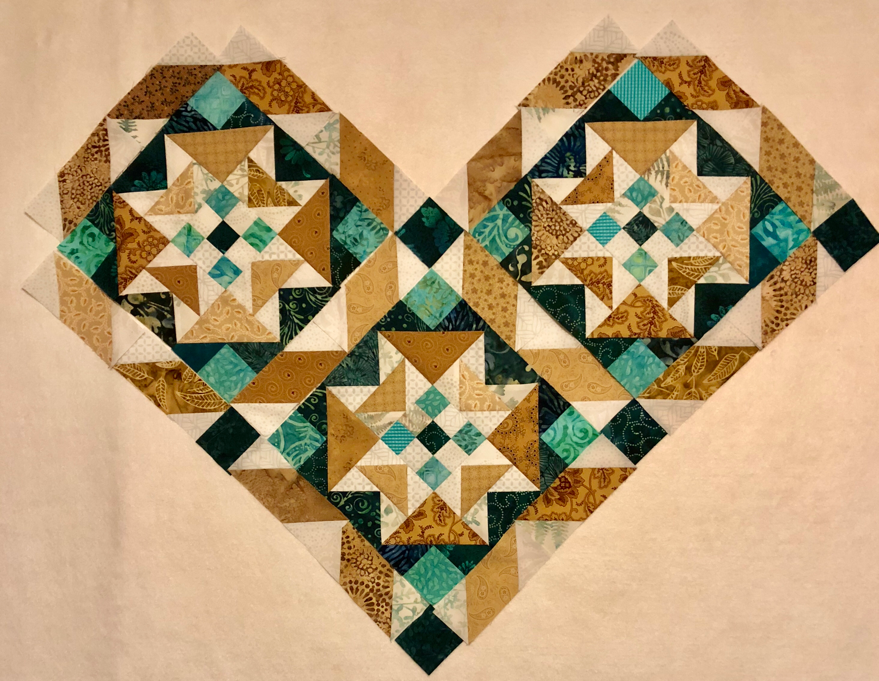 I spent a little time doing some Slow Sunday Stitching on my clamshells last night.  I am half way through sewing the last rown on this panel - only a couple of clams left to go and then I can move on to the next one. I have been trying to use my "Lap App" when I work on this one. I know that everyone loves them but I am still not sold on it.... 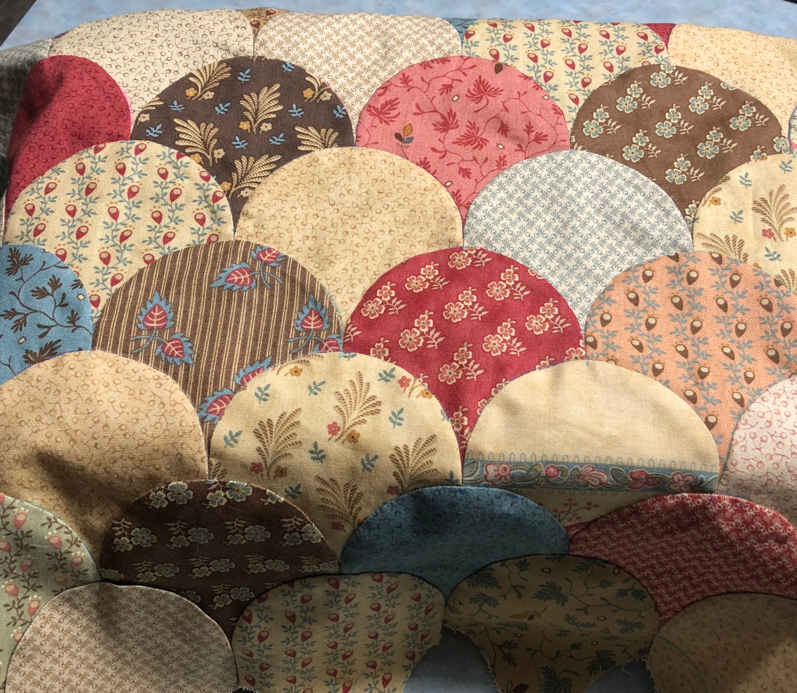 Head over to Kathy's blog to see how others spent their first Slow Stitching Sunday of 2018 and to the final Mystery Monday Link-Up on Bonnie's blog to see all the fantastic progress and fabulous variations of On Ringo Lake. There are some incredibly creative quilters in the mix - some of the alternate settings and colors make me want to do this one again!
Posted by Dana at 4:52 AM 7 comments:

I always begin the year with big plans to be more productive and to get more projects across the finish line. The problem is that I am so easily sucked in by all the new sew-alongs, BOMs and group projects that I can’t stay focused on the “old” stuff! I've decided to join in on several link-ups to hold myself accountable for making progress and to help prompt me to post more frequently. One of these new-to-me link-ups is Elm Street Quilts' One Monthly Goal. The "rules" for this one are fairly broad, specifying that projects selected can be anything with "thread, fabric or yarn" and the best part is that you only have to commit to make progress, not finish!  So for my January OMG I have selected my current rug project, Floral No. 7 designed by Janice Johnson. 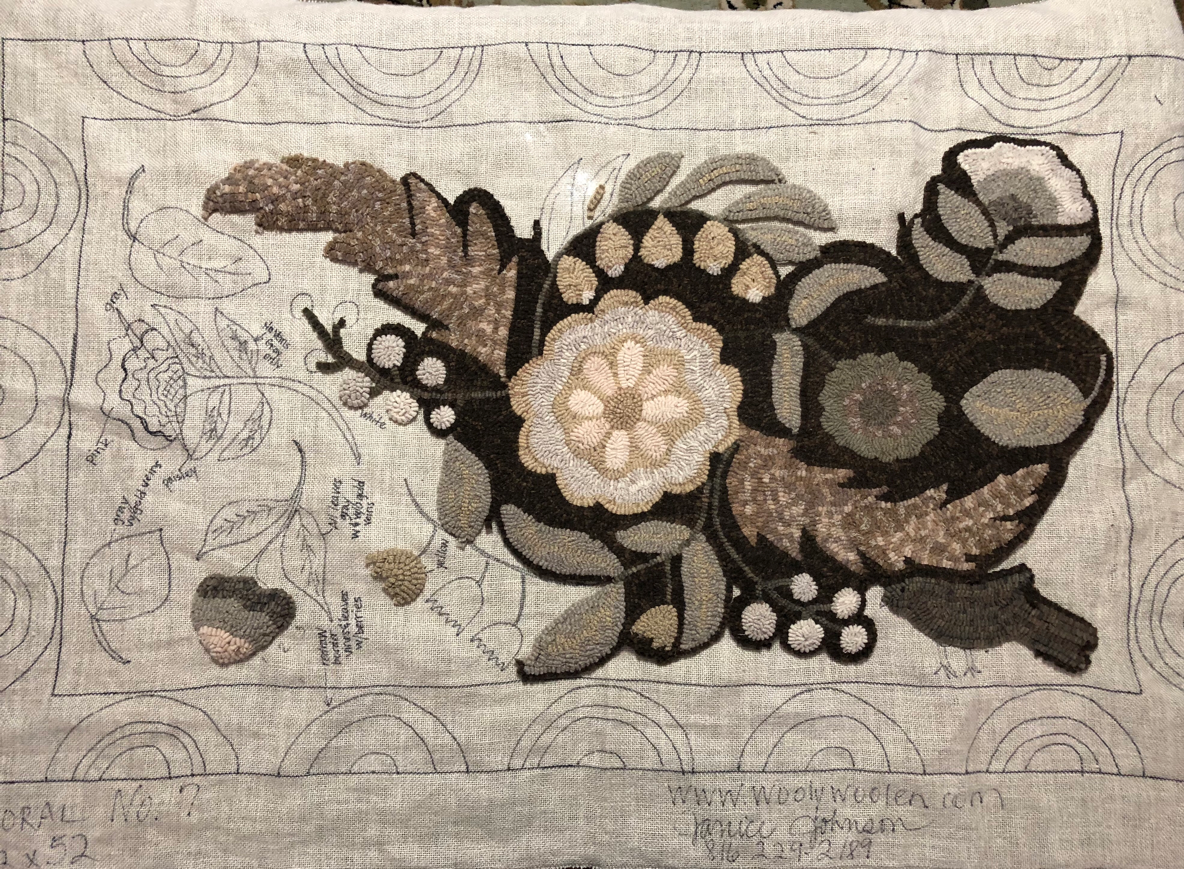 I started this rug last July in a workshop with Jayne Hester. The neutral color plan is very different from any of my other rugs and has been a little challenging in places, particularly getting the stems to show up. Jayne suggested that the border design really didn't fit with the more formal tone of the center and recommended that I redraw it with vines and leaves. So this month's goal is to get the border redrawn, figure out colors for the border elements and beauty line, and to continue to make progress hooking. I'm anxious to get this one finished so that I can get back to the one I started last October - the vibrant reds on black will be a huge change after this one!
Posted by Dana at 7:29 AM 4 comments:

On Ringo Lake was revealed today and I love it!  I would prefer the quilt to be a bit larger, at least as far as the width is concerned, but I think borders would end up making it too long.  I’m considering adding two more columns to make it square but really don’t like the idea of having to do all the additional piecing. I will have to give that idea some thought.  I love how my colors came together and think I am going to be very happy with the finished quilt! 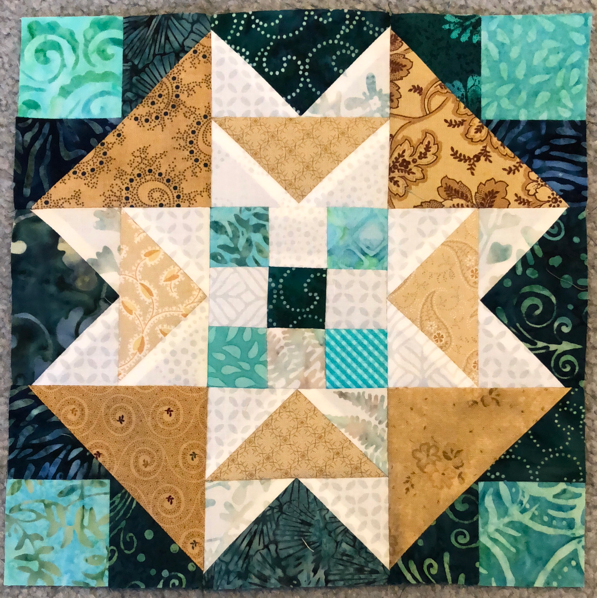 As the year came to an end I took a look back at my 2017 UFO list and while it was my best year yet as far as finishes were concerned, it always amazes me how an entire year can go by without even touching a project that was of interest in January!  I was a little easier on myself last year, choosing several projects that were very near completion.  I really don't have any of those to list this year, so I decided I would take a slightly different approach and instead choose projects that already have considerable time put into them but need serious focus to get them closer to the finish line.  I am pretty sure that most of these will still be incomplete at the end of this year, but my goal is to spend at least some time on them no matter what other shiny objects capture my attention during the year.  The first is Kansas Memories (Primitive Gatherings design).  This one isn't on my quilt project list for some reason - either I forgot to add it or it was started prior to 2007 (which is a definite possibility!).  This one has been waiting for the applique to be completed for a very long time. The vine and a few leaves and berries have been basted in place but I have not done any of the stitching. I think there are over 400 leaves to be added to this one! 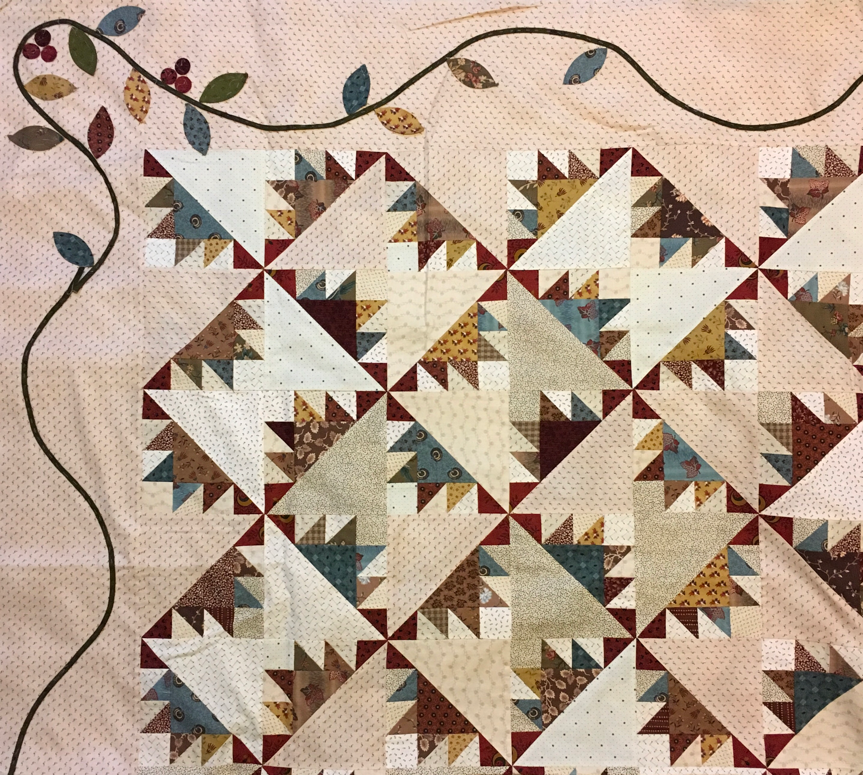 And then there is my Spools quilt that I started in a workshop with Edyta at Paducah in 2015 and used strips from a guild exchange to complete. I haven't done anything with the borders on this one yet and if memory serves correct there is a LOT of applique needed. 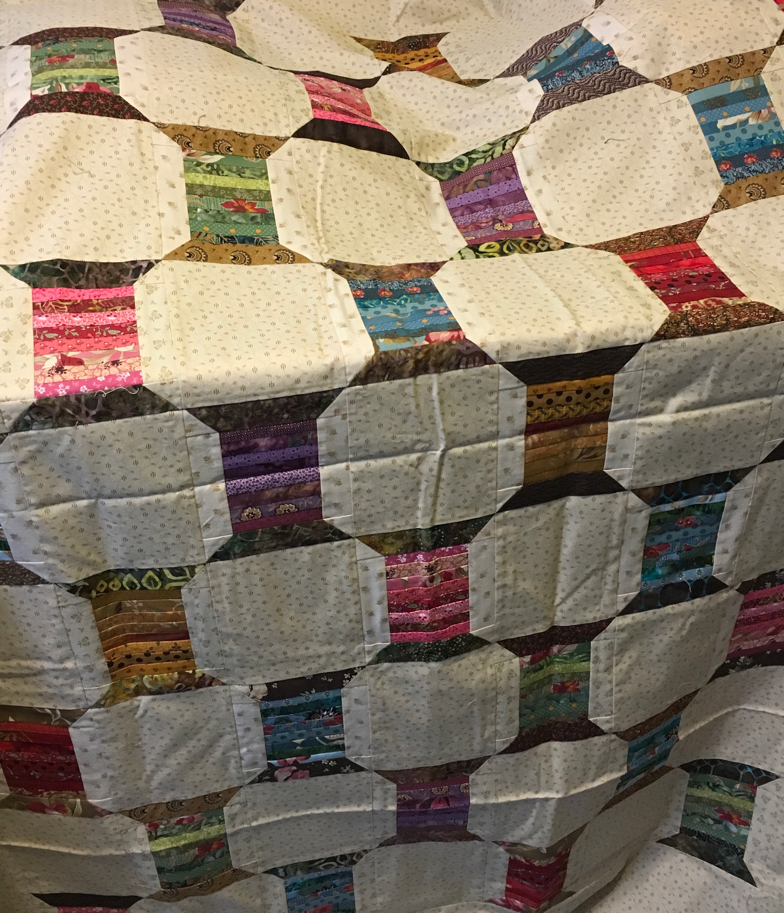 My Feathered Friends wall hanging was started in a workshop with Mary Sorenson at Paducah ten years ago. I am seeing a lot of leaves in my future! 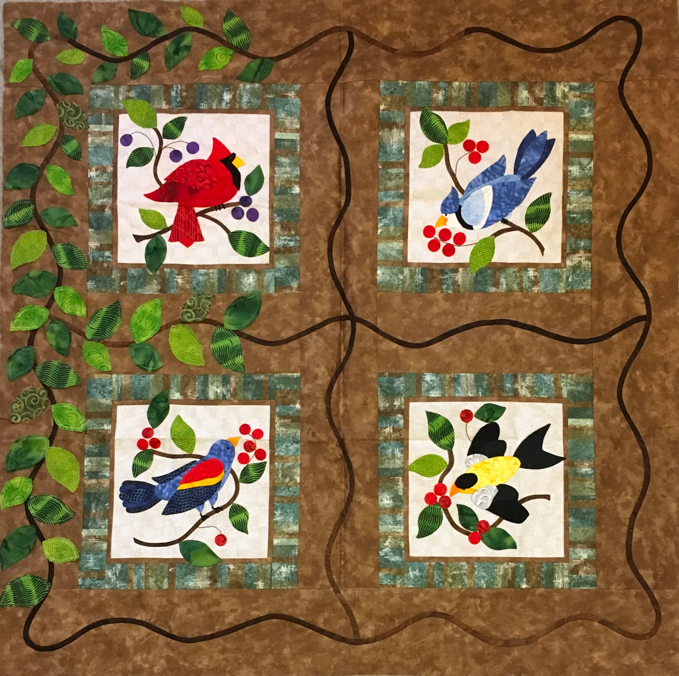 And then there are my tumblers....my "leader and ender" failure from 2016.  I decided that leaders and enders are not for me - I chain piece whenever possible and minimize the "wasted" stitching time anyway, and figuring out which color tumbler to add each time was really slowing me down. 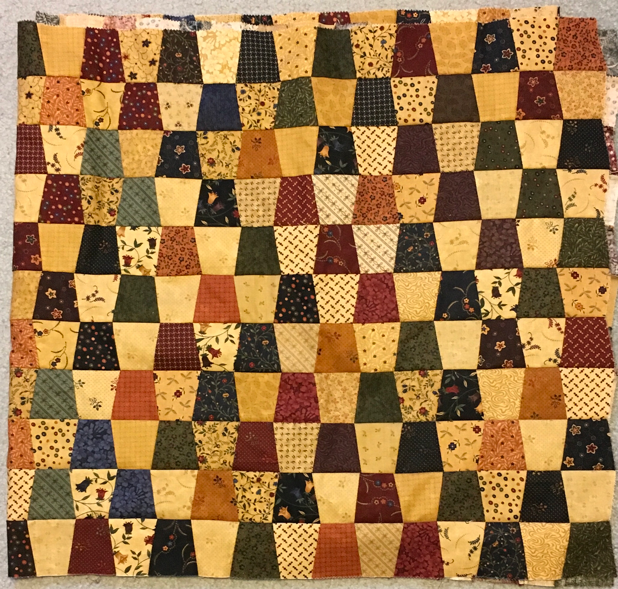 I rounded out the 12 by leaving a couple of 2017 entries on my list - perhaps 2018 will be the year I am able to move at least one of those across the finish line?

I am already getting sucked into the vortex of new projects for the new year.  There are at least two that are tempting me already - and it's only January 2nd!  One of these years I need to resolve to have some self-control!
Posted by Dana at 5:24 AM 2 comments: