September has been crazy busy and lots of fun so far and it's not over yet!  I just returned from Baltimore on the Prairie 2017 and will be heading out this week for the MQX show in Springfield. I've done a lot of flying and driving in the past few weeks (there was a business trip to Connecticut in the mix) and although I don't have much to show for it project-wise my brain is exploding with inspiration!

Before heading off to Nebraska I made a quick day trip down to the first fall Paducah Quilt Week to take a class with my quilting hero, Lisa Bonjean. It was everything I hoped it would be and more!  Lisa is a fantastic designer and even better teacher.  I didn't get very far on my project but have it all prepped to stitch.  Perhaps I can have it finished for fall next year! 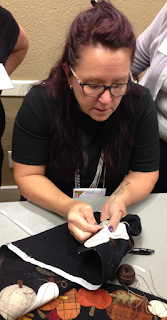 I was part of the inaugural class of the Open Studio at Baltimore on the Prairie this year.  I spent quite a bit of time prepping projects in the weeks prior to the trip and had great hopes of getting lots of things accomplished.  I took five projects along - two SLAM blocks, two panels of clamshells, wool appliqué and English paper piecing.  And how much did I get done?  Not even one SLAM block - and I worked on it the entire time!

We learned several new tricks from our Open Studio classmates and saw some amazing work.  One of this year's teachers, Jeana Kimball, shared some of her recent Baltimore album research with us and gave us a sneak preview of the Jane Austin-inspired quilt she is working on. 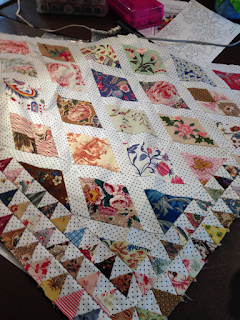 She's added some appliqué to some of her diamonds and changed the border to triangles.  It looks great so far!

I don't have much in the way of my own work to share in this post, so I will settle for a somewhat recent picture of my Maggie rug. Since this was taken I've hooked the bird and the tree and have started the background in that section.  I am making myself finish the background nearly down to the cabin before hooking the cabin itself - I can't stand to leave the boring stuff for last!

I would love to have this finished and ready to bind when I head to Janice's next week.  Not that there's any chance that will happen!  How long until I can retire??
Posted by Dana at 7:21 PM

Your hooked rug is beautiful... I especially like the way you hooked the grass!